The actual Canuck event is still a month away, by Canada's dominance of the 100-year old Henley Royal Regatta in the UK was like being in St. Catherine's... well, without all those pesky lanes and flat water. The Henley Royal doesn't need that. ("What weather/rain/wind?")

The Canadian sweep of some crowd-favorite events left the Steward's without some of the roaring finishes that occur with a close UK scrap at the last 500.

In the Temple, two well-matched crews lined up in what proved to be a rare spell of dry weather, although it was overcast and threatening. Trinity College and University of Western Ontario had spot-on equal average weight for rower, and a distribution of athletes (by year in college) that was very similar as well. No tipped scale here.

Trinity had a rough start, but the crews were even at the 1/4 mile. By the 1/2 mile, Western Ontario had moved up a length at a higher rating, always about 2 beats higher than Trinity. The crews stayed one length apart for most of the trip down the course, until the last 250, when UWO really powered it up and grabbed some more water, just as they did yesterday against Harvard, winning by 2 and 3/4 lengths. UWO Coach Volker Nolte has very little rest this summer before the start of the Canadian Collegiate season in August. He will be working on re-building a crew that loses many of its oarsmen to graduation.

The Canadians' next opportunity to secure some silver at prize-giving was in the Grand Challenge Cup. Last year the Canadian National team won this event then went on the win at World Championships. This year, their U23 team was looking for the same kind of success, under the name of Victoria City and Kingston.

In this one, the reverse was true about rating: the Canadians kept a lower rating, and led down the course. University of Southern California had a robust start and stayed at a high rating until the half-mile. The Canadian crew stayed steady about 2 beats lower, swinging very well together with only about a month in the boat together (several of these athletes are in US universities). They never wavered from their rating despite USC pressing at their stern, striking higher within 1/2 length.

In the sprint, the Canadian crew powered up with length and rhythm winning by 1 length and jubilant at the finish, over USC. Then the sky opened to the third round of downpours on the day, there were more to come.

The USC Crew has one of the more controversial line-ups, with 6 Estonian National Team members of questionable USC matriculation, asreported on row2k earlier this year, hence the crew's presence in the top-shelf Grand Challenge.

The Prince Elizabeth Challenge was a fitting culmination of the North American hat trick, as it was the only race that involved an English crew. In this PE final, Shawnigan Lake, neighbors of last year's PE finalist (and losers by about 1 foot), Brentwood College School, matched up with Eton College, a regular on finals day in the PE over the years.

The race was a close match in size, and although there were some that were surprised to see Shawnigan Lake in the finals, nobody felt the same about Eton, as if they were grandfathered in to excellence. No entitlement with these boys, they clearly were out for a win, with or without history in their favor. A quick look at archived results showed that a Canadian Crew hadn't won this race since 1998, when Ridley College School took the Cup.

As the race came through the crowds at the grandstand, the cheers were for Eton, but almost any observer could see who was going to win, Shawnigan was energized. Eton has a quality boat by any standards, these kids were skilled oarsmen; Shawnigan was just driven.

"We did this for Brentwood," said Coach Tim Coy of Shawnigan Lake, who is good friends with Brian Carr, the coach of the prep school just miles away. Coy has only coached these kids for 3 years, before he coached at the junior level (this is 9th/10th grade in Canada), he moved up with the freshman that he first coached. "We get a lot of support from them."

"He coached my kids to two schoolboy's championships and now here... he does a great job," said one satisfied parent.

"We thought we had potential to get here," said Coy about his fall season in Canada. He clarifies, "after we won at the Brentwood Regatta we decided to go to Henley."

Isa Bourbon, Shawnigan's senior coxswain felt the regatta was a great choice. "I learned more this week than I learned last year coxing." She says that the international regatta with top-level boats, different course and style racing was really valuable for her. This recent grad had a scholarship to Temple University in Philadelphia, row2k will likely hear from her again.

The kids had to train during exams, early in the morning and after dinner sometimes to get ready for Henley. At the regatta, coach and his wife, who acted as the team manager, wrangled the kids for the entire week to keep them on task. As they stood outside the boat tents sipping champagne after the race, the coach said his thank-you's to the parents and then added: "you may talk to your children now."

The day overall was slowed by race postponements from thunder, wind and driving rain. Some athletes were stuck up at the top of the course in the rain for more than an hour waiting for the start. It was a tough day for a Finals day, the celebration of it all marred by the moisture, but 'onward ho' was the tone here, no need to let a little sprinkle stop the Henley.

Still more racing to report, including how the California Rowing Club did at the regatta, some interesting Princess Royal news, updates on other US crews and some items from the admin bin. Check back in the morning. 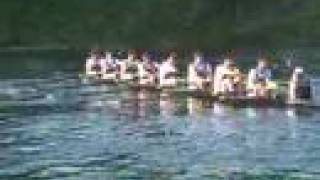