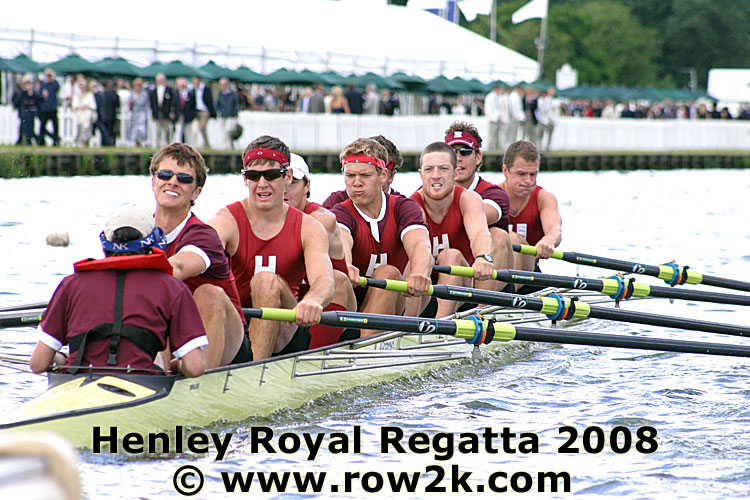 Racing was scheduled to conclude at 7:20 pm on Thursday, but a rescheduled race featuring Meers and Mead from the Salisbury School versus a crew from Wallingford Rowing Club bumped that time back a bit. The reason? The young rowers from Salisbury needed time to prepare for a run for the Visitor's Cup, a four race scheduled in the late afternoon. That race was not theirs unfortunately. They proceeded, likely with spent legs, to take on a long and grueling pair's race for the Goblets (the Visitor's and Goblets allow for doubling at Henley), brave lads indeed. Again, this race was not theirs. These Prince Elizabeth 'graduates' have had a tough run here at the Henley.

In evening racing of the Temple Challenge, Grand Valley State University took on another crew of recent Prince Elizabeth "aged-up" athletes from the Shrewsbury School, who were the heartbreakers in the PE last year (though with a different group of athletes). Grand Valley moved on, easily the stronger crew.

In doubles racing, Simkin and Winkler from the California Rowing Club advanced to the next race, dominating the Spanish crew of Pueyo and Arranz.

In the Temple Cup, Stanford University crew comfortably defeated Fitzwilliam College, Cambridge. The US match-ups in this race will certainly start tomorrow, as will the good news/bad news scenario that comes with it.

Trinity College's straight four in the Visitor's Cup was impressive, with good steering and enviable length as they rolled passed the Steward's to advance to another race over the weekend.

Friday's racing will see several US match-ups in the Temple (thus the good news/bad news), and several of the California Rowing Club talented athletes. More news in the AM!

After the first round, it is less about the individual match-ups, and more about Cups at hand. The draws are bringing the semis and finals into focus, and coaches are wiping their lens?here we go folks, this is getting interesting. As the brackets narrow, everyone by the boat tents are predicting, speculating, prognosticating?planning.

Thus is the case with the diligent Prince Elizabeth Challenge Cup watchers. The emotional involvement in this Challenge tends to have a touch of Mum saying "that is my baby out there!" The scholastic races are passionate expanses of time, anyone who witnessed the to-the-wire finish at the Final of the PE last year can attest. The Brentwood College School from NW Canada lost by inches to Shrewsbury School, producing the highest-volume cheering in the enclosures of Henley 2007.

This year St. Joseph's is still in it due to their win this morning; Salisbury School (US) was bumped out by Abingdon School (UK) this afternoon. Shawnigan Lake School (CAN), located just miles from Henley 2007 Final contender Brentwood, is advancing as well--a coxswain from California at the helm. Eton from England and Scotch College from Australia are also going to the quarters.

The Temple Challenge field reduced some more during this mid-day session Thursday, with Trinity having a gutsy last 1000 meters and bumping out Oxford Brookes. Maybe a bit of lactate seeping into the muscles on this one; they won by half a length and it was hard-fought. Oxford Brookes had a good start and was ahead at the barrier, by the mile, Trinity was rowing through their boat. Neither boat really settled into a lower rating.

A rough day for Salisbury School, as their Junior 8 dropped out of the PE today and their entry in the Visitor's Challenge Cup lost by the painful margin, "easily" to Martyrs BC and Christ Church.

One more administrative bit: The pair race with Meers and Mead of the US/Salisbury School originally scheduled for the mid-day session was postponed. The duo, it turns out, are part of the aforementioned losing Visitor's crew, and need a little rest between races. It will be rowed after regular racing today.

Thursday started with sun-- no, make that rain! Well, a bit of each, really. American crews got to sleep in, with J.P O'Hay from California Rowing Club the first from the States down the slightly turbulent water of the Thames at after 10:00 am. His loss by just 1 length was not a sign of things to come, thankfully, as St. Joseph's Prep rumbled with Hampton School just two races later, and made another one 'easily'.

In the Prince Elizabeth Challenge race, St. Joe's represented Philadelphia scholastic rowing quite well; Hampton School started at a higher rating, but there wasn't enough power behind that turnover to match St. Joe's. St. Joe's moved out to 3 lengths by Fawley, but did not settle to a lower rating despite the real estate they had between the boats. As they were passing Remenham it finally occurred to them it was safe, the crew settled way down from a 33, to a 30, then a 27, while Hampton hustled to keep some contact. Their 35 rating at the finish was for pride; St. Joe's had cruised across the line at a 26 sitting tall, more than 5 lengths ahead. Get some rest, boys, things will get tougher as we get along here.

As the races progress this week, spectators will be seeing more of California Rowing Club, with a total of five crews flying their state flag oars in the lock, and elite scullers in the seats. Many of these athletes are up-and-comers in the US national picture, getting a glimpse of them now a bit of a preview for US rowing fans. In the first round of the Prince of Wales Cup, CRC's quad of Liverman, Holbrook, Miller and Sullivan won easily over Tigre Boat Club from Argentina. They were about 35 pounds per man heavier, which may have helped, and it didn't look like inert flesh.

Harvard Freshman (above), racing in the Temple Cup, rowed a good start, and soundly out-rowed the opposition to the finish. After a long pause at the start while the current re-directed bows repeatedly, they started and rowed on like a very confident young crew. The athletes settled and lengthened after correcting a steering warning, rolling into the finish with a bit of reserves, over a length ahead of Balliol and Exeter Colleges from Oxford.

Sliver Goblets pairs challenges started today, and with the wind and chop there have been some close calls with the booms. Columbia University's Rizzo and Celano put up a good fight, but lost by two lengths to The Oratory School.

Williams College put another in the 'W' column this morning, winning by just under 3 lengths over Reading University, which looked like a strong crew during practices earlier in the week. Kudos to Williams.

At the close of the morning session, a crew from Riverside BC won their heat in the Prince of Wales cup for quads by just less than 2 lengths, more on this crew after some research.