Princeton's W8 rows into the final of the Remenham Cup

The Cambridge University eight competing in the first round of the Grand are the same crew who met Oxford in the Boat Race last March, although the crew order has been reshuffled. Four members of the eight are also competing in the visitors, in which they beat Olympics gold medallist Tim Foster's UL crew yesterday to line up a meeting with Molesey this morning. In the Grand heat later in the afternoon they meet Harvard, who have been undefeated for two years and came sixth in the World Cup at Lucerne tow week ago, when the rowed as USA2.

Which makes their challenge of the Harvard varsity this afternoon, which ended with a verdict of 1/3 length to the Crimson, really pretty impressive (I would have said "really quite remarkable," or "all the more remarkable," but one can't give in entirely to creeping Britishisms, can one?).

Once again tonight, I'll not scoop myself, and will have to leave some of the juicier quotes to be linked up in the piece I'm writing for tomorrow's Globe. Quite tiresome, I know - sorry.

The Pipes, the Pipes Are Calling
The only person who must be in the boat at the finish line is the coxswain after the Brasenose coxed fours captain instructed coxswain Frederick Weatherley to jump out of the boat at the word "Go" in 1868; the crew was later disqualified. Weatherley went on to qualify as a solicitor, practicing in Bristol, and later achieved his most lasting non-rowing fame by penning the words of "Danny Boy" to the tune of "The Londonberry Air" in 1913.

Princeton to Meet National Team
The Thames/UL crew that will face Princeton tomorrow is a composite of a slightly different stripe than the name might indicate; it is the GB women's four that will compete at the non-Olympics Worlds in Banyoles, and the GB U23 four, combined into an eight.

Deadline Pressure
Despite the time difference back to the US, making deadline at Henley is tricky, as it's a long day of racing, and the rapid closing of the press tent after the next day's draw is out - press people need to drink too! Don't worry, we continue to do business after hours…

On that note, Post-tea photos from Saturday's racing, including Grand semifinals, will be posted tomorrow.

The End of the World Wide Web as We Know It
A crowd of rowing Web geeks was sipping at Leander last night when one of the ranks noted that were a bomb to go off or a balcony to collapse, rowing on the Web as it is currently known would cease to exist. On site - the nlroei mob, worrell, quarrel, the slug, row2k, and a few other players. A quick mental review of who has the passwords for each site produced some glimmer of hope; cheers.

Shouting
When a crew that qualified for the finals in the morning, returned in the afternoon to watch the other semifinals, a gentleman asked for whom they would be shouting. There's always a wag around to say "They've gone from shouting to scouting."

American in the Women's Single
Cindy Bishop has been able to sleep in this week; her quarterfinal yesterday was the last race of the day, at 7:10pm, and her semi tonight went off at 6:20 pm. The sleep seems to have done her very well; she's in the final tomorrow, no small feat in the single here.

Tally of US crews advancing to the finals:
Princeton in the Remenham Cup (open women's eights)
St. Paul's in the PE
Harvard 2v in the Ladies Plate
Harvard 1v in the Grand Challenge
Cindy Bishop in the women's single 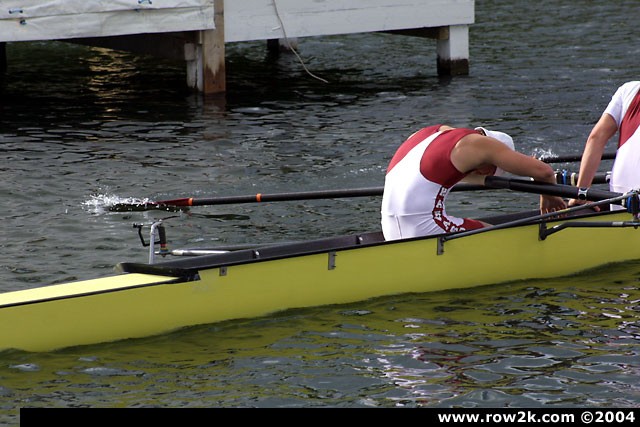