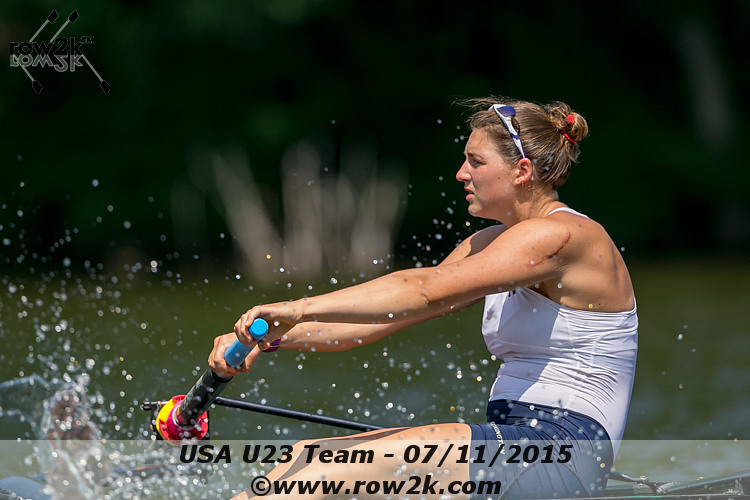 Dougherty training for the 2015 U23 World Championships

This week row2k features an interview with Washington Senior rower Sarah Dougherty. As a former swimmer, Dougherty started as a novice at Washington and won two U23 World Championships this past summer.

row2k - You started rowing as a novice at Washington, what was your athletic background prior to enrolling in college?
Sarah Dougherty - Before I went to college, I swam for about eight years. I started swimming lessons at Kent Swim and Tennis Club, and a summer after that I joined their competitive swim team. A few of my close friends were on a club team and completely dominated the pool at summer league meets, so I joined King Aquatic Club with them to be fast like they were. I moved up in the club levels as I got older and soon swimming became my life. I had training three hours a day except for Sundays, which were an hour and a half. I learned a lot about being an athlete during my time in the King Senior group, and I especially learned a lot from my coaches.

row2k - How did you start rowing and what was your novice year like?
Sarah Dougherty - During my senior year of high school, I was applying to colleges and trying to get recruited to swim at a Division 1 school out of state. I needed to go best times at our state swim meet in order to go on a couple other recruiting trips. I had a terrible meet and didn't go any best times, although our team did very well overall. I remember being in the lobby nearly in tears with my mom, asking her if we could leave, when Bob walked up to me, handed me his card, and told me I should try rowing. I gave him a bit of sass, because here was a rowing coach at a swim meet recruiting for his sport. After I took some time to think about this, I decided to just go watch a practice at Washington to see what rowing was like. After taking an official recruiting trip to Washington and visiting one other school for swimming, I decided I couldn't pass up the opportunity to row. The way it came into my life was so significant I figured it had to have something good in store for me.

Freshman year was like being thrown into the deep end. I started on the freshman team, but in January they moved me up onto the varsity squad. I started in the fours group to learn more technique, but somehow ended up in the JV that spring season. The first regatta of my rowing career was the San Diego Crew Classic, and in our heat I caught a massive crab in the last 500 meters. I had no idea what to do. I just remember crying and feeling extremely embarrassed and as though I let my teammates down. Freshman year was definitely an eye opener to not only the sport, but what it's like to be a part of the Washington Rowing team. The older girls showed me the way through the program and I quickly discovered just how special our legacy is.

row2k - You had a successful summer winning two golds at U23s, what was that experience like and what did you learn that will help you during your senior season?
Sarah Dougherty - Wow, this summer was incredible. I learned so much from the coaches and my teammates, but I also learned a lot about rowing from the summer before, in 2014, when I went to selection camp but didn't make the team. Going to both selection camps is an eye opener because it gives us all the opportunity to row with different people and different strokes. It's a great way to get out of my comfort zone and experience working with incredible athletes from different schools.

I think one of the biggest things I learned this summer was the idea of believing. This sounds corny, but I've always struggled a little bit with believing in myself and my abilities. Over the summer I was constantly telling myself to trust myself and my skill. Before our four final, I was so nervous at the hotel I was in tears. I had to have a conversation with our coach to calm my nerves and realize it's okay to be nervous, and I should believe in the work we had put in up until that point. This has helped me going into senior year because I knew this year was going to be different. I set big goals for myself and our team and I know the only way to achieve them is to believe in the process to get there.

row2k - UW Women's rowing had a big coaching change midseason, what was that like?
Sarah Dougherty - Going through a coaching change was definitely something I didn't expect to happen as a student-athlete. Through a fair amount of negativity from outside media, it became even more clear to me that Washington Rowing is comprised of athletes who commit to each other and the program. It takes a special kind of rower to not only be in the environment we have created for ourselves, but to excel in our environment as well. The coaching change that the administration chose to make did not change our environment for success or our goals of winning a national title. It was a hiccup in the process to get there, but I fully believe in our teams' capabilities. We are a strong group of athletes who will do whatever it takes to better ourselves as individuals in order to make our group stronger as a whole. 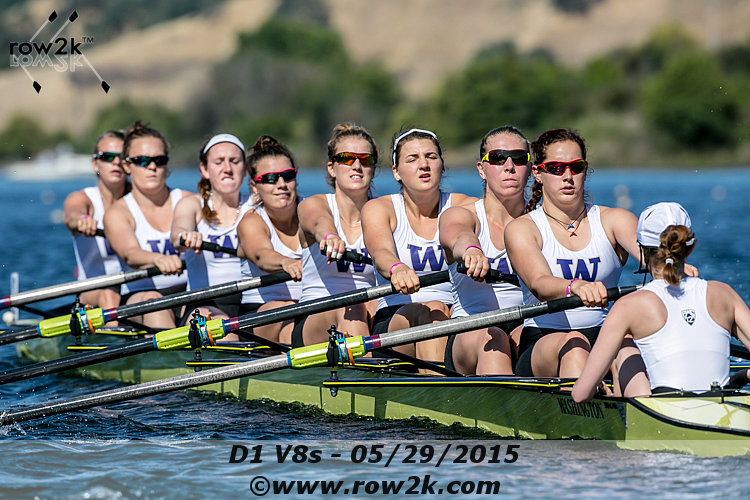 Dougherty (6-seat) racing with UW at the 2015 NCAA Championships

row2k - What do you like most about the sport of rowing?
Sarah Dougherty - My favorite thing about the sport of rowing is the amount of science that's plays into the sport. Every day I learn something new about how a boat moves, how an oar can move more effectively through the water, what different types of rhythms work for different crews, or how to translate land work on to the water. Rowing is a sport where perfection does not exist, but the strive to get there is a huge part of the process. I also love the fact that rowing is very much team oriented. There has to be trust within an individual and the crew. The relationships built within the sport of rowing are unlike any other because there is such a passion for each other wanting to be their best possible versions of themselves.

row2k - What has been your most memorable race and why?
Sarah Dougherty - My most memorable race of all time is probably the four final from last summer, simply because of how nervous I was. Our four struggled a lot over the summer to click. There were more frustrating days than not. We had a lot of built up passion for racing that boat by the time the final at U23s came around and we really nailed the piece. I remember our 3 seat saying '"we're winning" after we passed the 1k and I can't really describe the feeling I got in my stomach at that moment. It was a moment of disbelief but also so much passion for the sport and my teammates from both the U23 team and Washington. After our race all I could think about was all the people who helped me get to that exact point; parents, coaches, and teammates from both swimming and rowing. After all the struggle we had in the four, that moment confirmed rowing is the sport for me.

row2k - What are you studying at Washington and do you have any plans yet for after college?
Sarah Dougherty - I am studying sociology and communications at Washington. It took me a year or two, but I fell in love with studying how societies work and how people communicate in today's era of technology. I'm not sure what career I would like to go into after rowing is over, but I know I want to work with people on some broad level. Either in the corporate world or somehow help to better a society. After college, I hope to make the U23 again this summer and race at worlds at the end of August. After that, I hope to move to Princeton and train with the National Team.

Trailer Hack: Rewire Your Brain to Back Up Better
Rowing Headlines