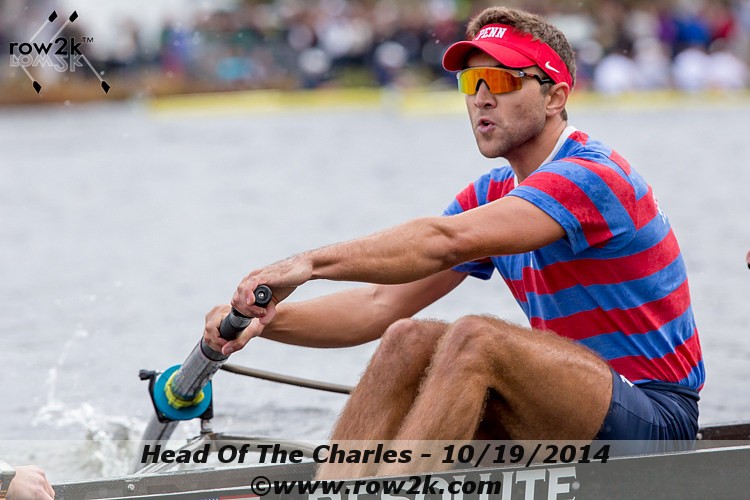 row2k - How did you get your start in rowing and how did you find your way to Penn?

Dara Alizadeh - I started rowing in high school my freshmen year at Belmont Hill School. I played a few other sports in middle school before rowing, and was an OK wrestler at the time. During freshmen year wrestling, I was approached by our Varsity rowing coach Chris Richards to see if I was interested in joining the crew team. After some encouragement from my parents, I decided to give it a go, and joined the middle school rowing team. I definitely struggled at first, as getting into a wobbly boat was a bit unnerving. Nevertheless, thanks to my great coaches, I really started to improve and found I had a knack for rowing.

By the time I was a junior, I focused on both rowing and wrestling, as each sport provided a great workout and lesson, not to mention they were both just really fun. I started receiving messages from some schools about college rowing, and my coach said that I had what it takes to row competitively in college, so I started looking at different schools. I spoke with Coach Myhr here at Penn, and when I came to visit the campus, I really fell in love with the school and loved what I saw with what Coach Myhr was doing here with Penn Rowing, plus I was encouraged by my uncle, a Penn alum. Having a boathouse in a place as historic as Boathouse Row has been awesome, and I’ve had a great experience these past 3 and half years.

row2k - How has your family responded to you taking up the sport?

Dara Alizadeh - Rowing has really taken over my entire family! After I started rowing at Belmont Hill, my brother walked on to the Wesleyan University rowing team, and rowed for 3 years there. My dad also started rowing, and now rows out of Cambridge Boat Club and the BU boathouse. He even ergs in the winter! Finally, my mother has been extremely involved throughout my rowing career, helping with regatta logistics and the parents’ tents. With a few exceptions, they’ve been to every race I’ve had, from races on the Charles all the way to the IRA in Sacramento, so to have such a supportive family has been unreal for me, and I think they enjoy the rowing scene as well, so it’s fair to say that we’ve really become a rowing family!

Dara Alizadeh - There are a lot of things that I love about rowing, from the deep friendships and connections I’ve made to the thrill of a race. Apart from winning races, my favorite aspect of rowing is going out on a sunny day in the spring or summer, when the water is perfectly flat, minimal wind, and the boat is just humming along, all 8 guys are connected, and the boat is totally on keel. There’s a magical feeling with the flow and the swing of a boat, and I feel like we could just keep going for hours. It takes hard work and patience to find that good flow, but once it starts clicking, going out on the water and cruising on warm, sunny days is what I love most (it’s summertime, how can’t you?) and something which I remind myself why I row when it’s cold and raining and windy!

Dara Alizadeh - The Pennsylvania Invite last year was definitely one to remember. It was our first race of the season, and the Varsity 8+ came out undefeated against Drexel, Northeastern, and GW. No one really knew what to expect going into the races, so all we could do was just buckle down and race like we had nothing to lose. I remember the Drexel race in which the water was wild, the wind was howling, and waves were crashing over the gunnels, but we just kept chugging along and ended up with a win. It was a pretty crazy weekend of racing, but we fought hard and it worked out well for us.

Dara Alizadeh - The fall season was pretty good for us. In the 3 races we had, we had some strong races: In our first race at the Navy Day Regatta, we ended up tying for first to the 1/100th of a second with Navy. We raced in the Head of the Charles and the Princeton Chase, and we got a lot of great work done in both. We just finished up a strong training trip down in Jacksonville, and we’re looking to have a great spring season, starting with some tough work this winter. As for the upcoming season, we’re really looking to take some steps; last season started off really well, but we didn't have our best races towards the end, but a lot of guys put in a ton of work since then, and we’ve got a lot of guys back from last year, so we have really high hopes for this upcoming season!

row2k - Do you have any plans to continue rowing after this spring?

Dara Alizadeh - I’ve definitely thought about it, and it is something that I hope to get into. Obviously, right now I’m just focusing on this spring and making sure we have a strong season, but this is my last Spring here at Penn, so if the opportunity arises to continue rowing internationally, that would definitely be something I would be interested in. I guess something to consider is that fact that I can row for a few different countries, as apart from the US, I have connections to the UK, Ireland, Bermuda, and Iran. While the last two are not quite as prominent with the rowing world, they both have existing rowing programs, and it would be awesome to see those programs continue to grow, and perhaps be involved with them!

row2k - What are you studying at Penn and do you have any plans yet for after rowing?

Dara Alizadeh - I am an economics major here at Penn. As for plans after rowing, I’ve really thought about a number of different paths, including graduate school to continue my studies in economics, or to get a job in finance or consulting. I’ve been fortunate to have these options open to me, and I know that whatever I end up doing, just like with the rowing, I’ll find support from family and friends!

Conn Findlay Has Passed
Get our Newsletter!
Enter your email address to receive our updates!