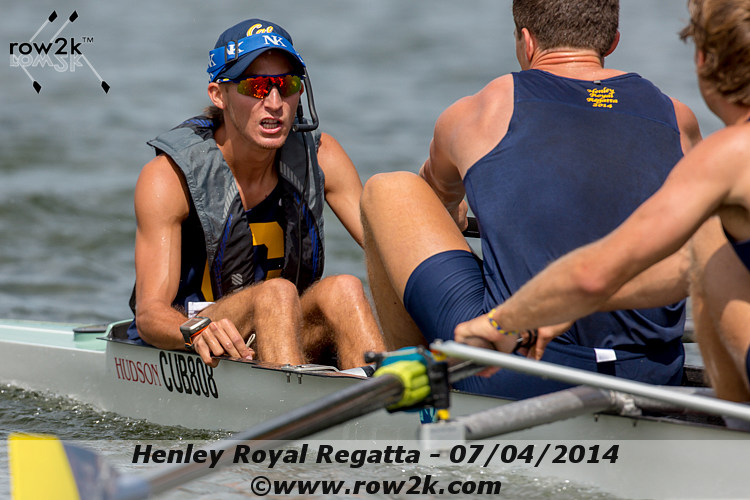 This week, we stay in the bay area with an interview with Cal junior coxswain Julian Venonsky. Venonsky transitioned from rowing in high school to coxing in college and last season coxed the Cal JV to Pac-12, IRA, and Henley titles.

row2k - You were a rower in high school, how did you find your way to Cal and coxing?

Julian Venonsky - I began rowing my freshman year of high school at Malvern Prep and rowed lightweight for my four years there. When it came time to start looking at colleges I knew that I wanted to continue with the sport at the highest level possible, however being 5'6" and 120 pounds I switched gears and started thinking about coxing rather than rowing in college.

I rowed in the Fawley Challenge Cup at the 2011 Henley Royal Regatta, the year that Cal was competing in the Temple Challenge Cup. That year they set almost every single record in the event. Watching them come down the course I knew I wanted to be a Golden Bear. With help from my high school coach Craig Hoffman, I was given a shot and was accepted into Cal.

row2k - What was the most difficult thing in transitioning from rowing to coxing?

Julian Venonsky - It wasn't really what I expected. I always thought coxing would be easy. I was very wrong. Even though I was still a part of the sport, I had a completely different role to play and the transition was challenging. The hardest thing was probably learning to clearly and successfully articulate what was in my mind out loud to the 8 guys sitting in front of me.

row2k - Your crew had a successful spring/summer last year. What were some of your highlights from 2014?

Julian Venonsky - The 2014 racing season really took off after our win at PAC 12's. Then that momentum carried over to our victory at the IRA and finally the Ladies' Challenge Plate at Henley. Our win in Henley was probably the highlight of my spring/summer. The last time I was in Henley I was watching Cal row past, now I was the one wearing the blue and gold.

row2k - What did that crew do so well that led to the wins?

Julian Venonsky - We had a goal, we knew how to achieve it and we executed. Everyone that was a part of the crew last year understood that teamwork was going to get us the "National Champion" title. We knew what it was going to take to achieve it and we all believed that we could. We executed the race plan and that led to us becoming PAC 12 Champions, National Champions and Ladies' Plate Champions

Julian Venonsky - Rowing is a very demanding sport. Early mornings and long days. What I enjoy most about it are the people that I am surrounded by for the majority of the day. The friends I've made here at Cal, especially the members of my 2016 class, are friends that I know I will have for the rest of my life. We all go through the long hours together, through the loses and through the wins. What I realized after last year's season is that winning as part of a group is the best way to win. And being able to share that with the guys on my team is really an honor.

Julian Venonsky - This season so far has been fun and a great start to what we are ultimately striving for: wins in the spring. My goal for this year is winning a National Title in the Varsity.

row2k - What are you studying at Cal and do you have any plans yet for after college?

Julian Venonsky - I am an Art History major and minoring in Italian here at Cal. As for after college, I'm not quite sure yet. I do know however that I want to stay with the sport, whether it be continuing to cox or something different.

More The Year of the Single 101: Balance (and Flipping), Blade Depth, the Grip, More
Rowing Headlines