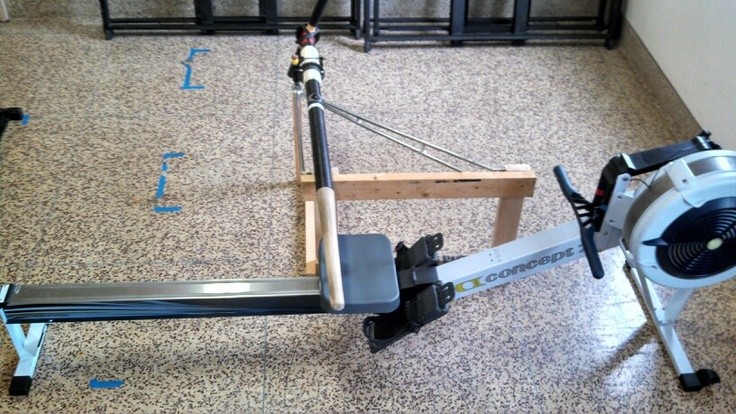 Fall is here now, folks, and that means just one thing for about half of the coaching staffs out there: the novices are coming ­ and that means it is time to dust off all your learn-to-row tricks.

We've featured a few hacks to help those rookies get the hang of things ­ like this neat trick for the outside hand ­ but Alex Mann, the coach out at Puget Sound, sent in a suggestion that might, if you like tinkering and have a spare rigger lying around, give you another tool to use this fall: the Erg Rigger.

Here's how Coach Mann describes his hack: "At University of Puget Sound there are no tanks, and I wanted to teach some points of rowing specific to sweep boats. We had a spare Empacher rigger and an oar with a broken blade. So I did the measurements and made a sweep station with a counterweight on the other end of the sawed-off oar. This setup allowed me to demonstrate and manipulate grip and rotation around the pin. If you bring it beside a pool (depending on the height of the wall), you can play with placement and catches.”

While he admits that this rig is not stable enough to demonstrate the drive, it does get his newbie athletes thinking about how they need to rotate towards the pin, plus the difference between the inside and outside arms­and we bet that it would work on the end of your dock for those placement drills as well.

We know there are some folks out there who have accomplished a similar goal by mounting an oarlock and pin on a tripod, but Coach tells us that he prefers his "actual rigger" set up: "I like the visual of the rigger to help with the visual alignment for the rower and for myself as a coach." By using a real rigger, this hack gives his athletes a sense of where their hands should be relative to the actual hardware they see in the boat, making for better learning all around.

Have a great way to teach the rookies you recruit each fall? Share your tips--and hacks--in the comments below.

If you have a great rowing hack, don’t keep it a secret: Send it to us!