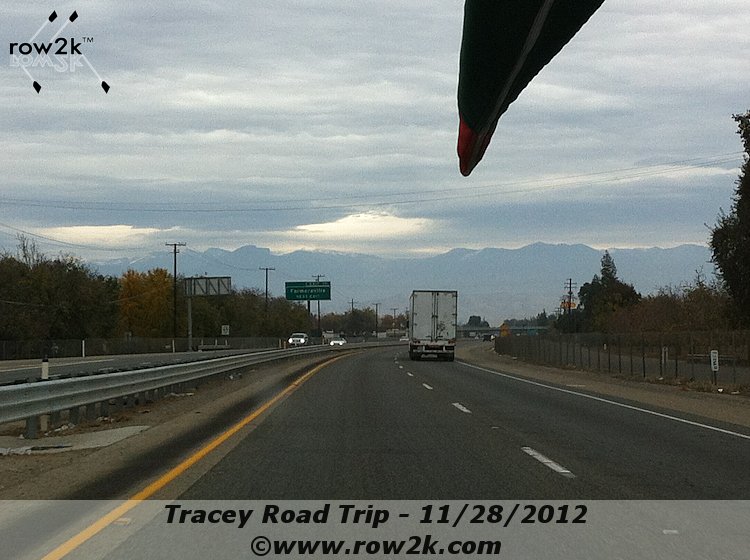 I spent the next few days in Oakland, resting, recuperating, doing laundry, and trying to figure out my next move. My stated goal of this trip was to go to Seattle, a place I’ve always wanted to visit. I have lots of rowing friends there, and I wanted to see one of the great cities – and rowing cities – in the country. Moreover, I had received a generous offer to stay with Rich Montgomery in Corvallis, Oregon. I had raced against Rich back when he was one of the fastest lightweights in the country in the early 2000s and it would have been a great honor to stay with him. Plus, just from our Facebook acquaintance, I could tell that he was a great guy, living a nice life with his young family. I even contacted Tiff Wood and was hoping to have coffee or something with him (he also lives in Corvallis). He told me I could join his erg workout group, but I didn’t have the heart to say that the erg and I don’t get along very well. Still, it would have been awesome meeting yet another legend in our sport.

The forecast not only called for rain, but a complete deluge, along with heavy winds. And then another one. And another. I realized what I already knew before the trip – that I was rolling the dice by trying to go to Seattle and Vancouver in late November/early December. So after going back and forth in my mind over a few days in Oakland, I decided to play it safe – for the sake of my boat, as well as my general well being (what good is all that scenery if you can’t actually see it?) – and head back down to sunny Southern California. It dawned on me: “I have a car. I’m on a road trip. I can go wherever I want!” It was a cool feeling.

The massive storm was coming fast, so I needed to hightail it out of Oakland in a hurry. I thought perhaps I could see another part of the state, so I made a fateful decision to drive down through The Valley. Good Lord, what a decision that was. And since I wanted to try and find a lake in Sequoia National Park, east of Visalia, I drove down Highway 99. Do not ever, ever drive down route 99 if you can possibly help it. If the Pacific Coast Highway is one of the most beautiful roads in the world, Route 99 in the Valley is one of the least pleasant. In fact, I can’t even refer to it anymore. From now on, it will be known to me as The Road That Shall Not Be Named.

California’s great central San Joaquin Valley feeds most of the country and a good part of the world, but getting that to happen is a massive undertaking, and if you drive this highway, you will spend it bumping along, on a rough road, with about ten million trucks. The air stinks, there’s no scenery, and you can’t drive very fast. It was a pretty miserable experience, from a road trip standpoint, and I was terrified for the sake of my boat.

I got to Visalia – a small city with some of the nicest people in the world – on the night of Tuesday, November 27, pulled into Starbucks around 5 PM, and pricelined a nice Marriott room for $50. The next morning, after a leisurely sleep, I decided to rough it and try rowing at a lake where No Man Hath Ever Single Sculled Before. I found such a place on the map, called Lake Kaweah, located in the foothills of Sequoia National Park. I figured I’d have a nice row and then check out the awesome Sequoias. But it was not to be, as I was outrunning another major storm yet again. I ended up having a tough go of it, rowing on a lake surrounded by rocks and desolate scenery. It was like rowing on the moon.

However, I met a couple of local cowboys, who were there fishing, and they pretty much made my day and redeemed what was otherwise a harrowing experience. Steve, a former horse breeder, and Jeff, a former rodeo star, had grown up in this area and marveled at my boat and what I was about to try to do. Steve agreed to take pictures of me – although, when I gave him my iPhone, it was set on video, so I only have some garbled videos and no actual pictures.

Both guys seemed happy to give up their fishing for a little while to watch me launch, and it was a lot of fun getting to know them, as they were two of the nicest guys you could ever come across (both were born and raised in the area). They analyzed my Van Dusen single scull as though it were a spaceship from Mars. I was able to beach launch, though those nasty burrs were everywhere, but as I started out, the clouds got darker and the wind kicked up. Undaunted, and now stubborn to have a row, I rowed around to what I hoped was the lee side of the lake, trying to avoid the wind and waves – a rather futile endeavor.

I made it about half way around and looked behind me to see massive dark clouds moving in quickly. I saw my tiny car way on the other side of the lake. I upped the rating and pressure and got back as fast as I could, barely getting the boat on top and stuff inside before driving out in a downpour. Oh well, I thought, I at least got the row in. And it was well worth it to meet Steve and Jeff, the cowboy fishermen.

Despite having had my most unnerving row of the trip – I was really worried about crashing my boat up on the rocks in the gusty winds – I was a blessed man yet again. I had kept in touch with Linnet Conley and Gayle Jennings, who treated me to brunch on my first morning in Newport, and, when I said I was returning, Gayle generously offered to put me up in her home, where she has a guest room with its own private bath. I was amazed at my good fortune. Moreover, I learned that the Long Beach Christmas Regatta would be held on Sunday, December 2, and that I might be able to get an entry.

I got in touch with Xeno, who put me in touch with Hope Wilkinson, the organizer (turns out Hope is a friend of Riverside’s own Kevin McDonnell, my former coach and good friend). She said to show up on Saturday afternoon at 5 PM for late registration and, if there was a spot open, I could race. Sweet!!! I figured that racing in this famous and fun race would be a nice way to end my Epic Journey and would make up for my disappointment at not making it back to Seattle. Plus, I got to go back to the place with The Most Perfect Weather On Earth – Newport Beach, California.