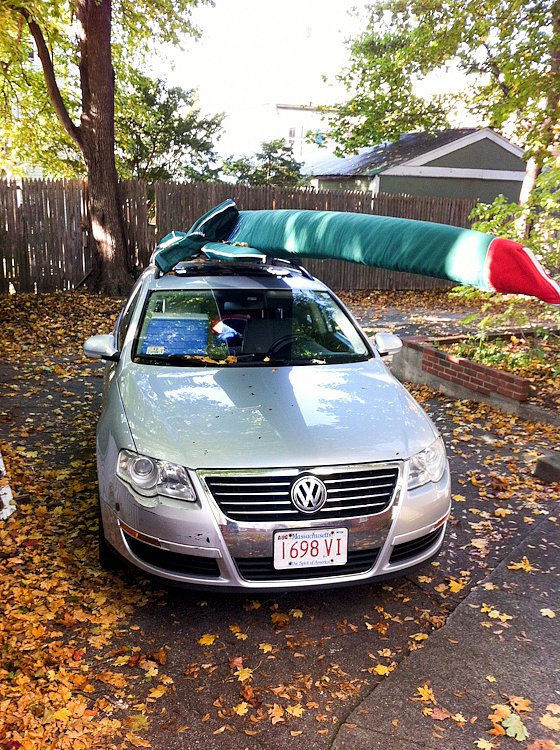 The ride
I'm sitting here on the Thursday after the Head of the Charles, looking at the sunset as I sit on the porch of my comfortable Cambridge condo. My car is sitting next to me, literally – I can drive it all the way into the back yard, which is covered in a lovely shade of cement. I have been working on my car for the past few days, transforming the back of the 2007 VW Passat Wagon into a sleepable cabin. With 4 inches of foam rubber (a giant piece, 2 inches wide, folded in half) that I pulled out of a dumpster at least 3 years ago – it was just put in there, honest, and had no scum on it! – providing a base, then wrapped in a twin mattress pad and covered with a fleece blanket, the bed was nearly perfect, except that my skinny 6-1” body couldn't quite stretch out out completely. So I engineered a platform that would perfectly fit and allow me to elongate in the back of this not-made-for-camping German car.

And yet I still had cold feet. Big time. I had envisioned this for years, maybe a decade or longer. Put a boat on top of my car and drive. Just go. One way ticket, baby. Stop at as many off-the-beaten-track (oh hell, even places on the beaten track), tell them I'm a roaming, road-tripping rower, and ask if it would be okay if I shoved off of their docks. (And even more fun, row in places not necessarily made for rowing, but looking picture-perfect). And of course, allow that I'm a writer and am documenting the entire experience for other eyes to read – hopefully with interest. Seems to me that fellow rowers would be pretty hospitable about such an adventure, especially since I'd ask nothing of them except for their dock space to launch and land and, if they were so inclined, perhaps a shower. Maybe even bring my guitar so I can find some funky blues joints in which I could play a few tunes with the locals. This dream took me South. I've never been south of the Mason-Dixon line for any length of time, and even then, only to some cool Civil War battlefields (Antietam, Fredericksburg, Harper's Ferry and Chancellorsville). Never really hung out there, and certainly never went to the Deep South. How cool would it be to do that while on a Mission To Row? To me, very cool.

But wait – as I conjured this vision, my reality was that I was a mid-life corporate hack, who had a family, kids, dog, suburban house – all that crap. I had bills to pay and responsibilities to keep. No way it could ever happen.

Never say never. It's interesting that both my car and the MacBook Pro on which I type are both vintage 2007. Because that was the Year That Changed My Life. Everything turned upside down. Without going into the whole sob story of it all, during a 13-month period ending just before Christmas 2007, I lost my brother to sudden death (aortic aneurism) – he was 53, I was 47 – then, 10 months later, my father to a 20-year battle with emphysema (WW II vet, smoked 2 packs of Kents a day for 40 years), and then, 3 months later, my marriage of 15 years. I fled the house, as the pain of the impending divorce was too much to bear, and I settled into a South End (Boston) bed & breakfast, where, thank God, my cousin was staying while she commuted from Dobbs Ferry, New York, 3 days a week to her job as head of the Boston Ballet School.

So from a few days before Christmas 2007 until now, I have led a different life than the comfortable suburban life I had lived in the leafy town of Concord, Massachusetts. Yes, of course, I struggled emotionally, as I made my way through the grisly battle that we Americans call divorce (hey, it only took 3 ½ years to settle the financial stuff!) and eventually came to terms with it all. In the meantime, I made serious enemies, and, happy to say, re-made friends with my ex-wife. I grew closer to my two children than I ever thought possible. After a few months at the B&B, I moved to an apartment near Harvard Square, then, after lots of court appearances and anguish, used my real estate settlement to buy a condo not too far from the beloved location of the apartment.

Just as I was moving in, I lost my job to a classic case of Typical Corporate BS. The new Head of Marketing at the investment firm where I worked, having overspent big-time on his advertising budget and wanting his own people, threw out the entire editorial staff and hired his own people. The newbies just happened to be a lot younger, less experienced, and, presumably, a lot less expensive. But hey, I have no grudges (seriously!). I was ready. The previous four years of personal turmoil were accompanied by equally insane corporate turmoil. A new CEO and two new Chief Marketing Officers (first one didn't work out so well), with each one reshuffling the deck. Never knew what was coming down the pike. And yet, I would have stayed there if things hadn't run their course. So when they offered me a year – yes, an entire 12-month period – of severance pay in late October 2011, I didn't have to think about it for more than a few seconds. Okay maybe a split-second. I was 51 and had been working all my life without more than the usual 2-3 weeks of vacation, which I never took all in one pop.

This past year has been one of job searching, soul searching, MAJOR laziness, rowing, and a lot of time spent in coffee shops. I have no regrets whatsoever. Except that the dream of doing the Epic Rowing Road Trip was never fulfilled. Last spring would have been great, but I was still in my neurotic “must find a job!” mindset. Time passed quickly, and before I knew it, it was summer and I was over my head in Summer Plans. Going to the Cape, Fourth of July, etc. After wrestling with a stubborn right-elbow tendonitis injury that had plagued me since the winter months, I finally said, “Screw it,” and began serious training (well, what I call serious) for the Worcester-hosted Masters Nationals in early August. This training began the second week of July. I figured the Great Masters Regatta would be just the thing to get my training engine started for the only race I care about – hell, the only race most people I know care about – which is that little thing in October called the Head of the Charles. I knew that my severance would run out at the end of October, and I went through several weeks of “What in God's name am I doing with my life…am I going to do with my life?” that was a lot more intense than at any time since I got laid off.

But then the idea of the Road Trip re-emerged, and I began talking about it with a few trusted friends and thinking about it more seriously. After the Charles, I'd have some time, if I hadn't yet gotten a job. It would be even cooler if I could write about it for row2k, the web site that everyone so admires. So a few days before the Charles, I emailed Ed Hewitt, and he emailed back, saying, “Great idea!! I did that in the early 1990s! Fantastic!!” I couldn't have been more pleased, but then the reality of it began to smack me upside the head. Still, I persevered, and finally, in a moment of clarity, started making some moves. I entered the Head of the Schuykill, and decided that this would be the jumping off point for the still-theoretical trip. By booking that race and hotel room in Philly, I was now committed – to something. During the past few days, I made some more tentative moves – doing the above-mentioned car-camping tasks.

This morning I awoke, still with cold feet. But all that changed when Ed gave me a call and said that yes, row2k would sponsor me. We spent an enthusiastic hour talking about how cool it would be. He regaled me with his epic stories of his epic trip, and we discussed my tentative agenda, which was surprisingly similar to his: Drive south, through the mid-Atlantic states, through Georgia and possibly reaching Florida (I'd love to see the course at Sarasota), then west along Highway 10, through the Deep Southern states of Alabama, Mississippi, and Louisiana, then west through Texas, stopping to say Hi to friends all along the way, and ending in Southern California. I've always wanted to go to LA, and I've always wanted to drive up the coast of California. What better way than with my Van Dusen on top of my car? Stop in the Bay Area to hang with friends and family, then on up the coast to the final and ultimate destination: Seattle, one of the Other Great Rowing Cities. I suspect it will be late November when and if I reach Seattle, but I am determined to get there via this proposed route.

I hope you join me along the way. I promise pictures, prose and adventure. Life is short, and there's no time like the present. As Robert Plant famously sang, Now's the time, the time is now. I gotta ramble on. And one more thing – Life is GOOD. Live the dream.