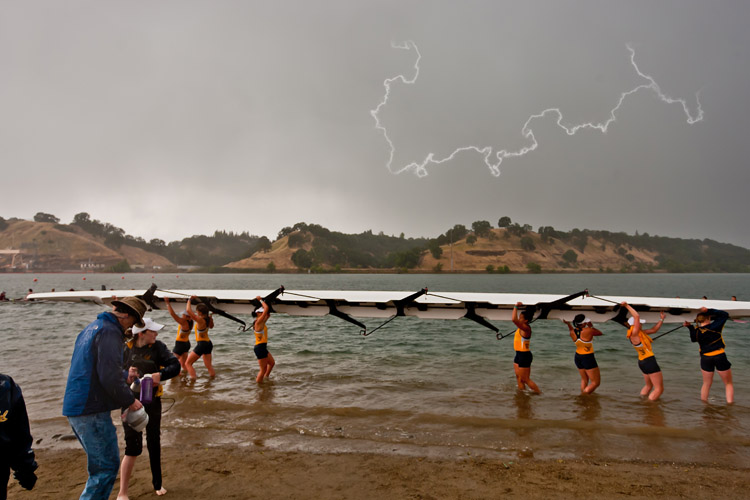 The trees filtered in a pleasant morning light, and I groggily walked down to the boathouse. As per the daily morning routine, everyone was to scull. I was in Craftsbury Common, Vermont, waking up to the fifth of six days at a rowing camp. I fetched my oars, and carried my boat down to the dock. It was a sleek red racing shell, and this would be only my second time piloting the thing. Beforehand, I had to work my way through several shells built for less experienced people. Still, the coaches had seen that I was a good sculler, and so moved me up a boat the previous afternoon. Like any other day, I launched from the near dock in a flotilla of other single-person sculls trying to make their way around the lake.

About halfway down the lake, I noticed a very peculiar trend. Some of the other boats were already heading back, not even fifteen minutes into the practice. While I thought this weird, I made no note of it, assuming they had completed a lap far faster than I and were simply going back around for one more. I calmly made my way to the end, taking measured strokes and working on my technique. I reached the furthermost point, and everything was serene.

And then, over the placid waters of the lake loomed darkness. Grey clouds enveloped the sky, and the wind picked up ever so slightly. I looked around, and saw that no other boats were near me. The breeze became greater still, and for the first time, a twinge of doubt crossed my mind. Behind me came a mechanical gurgling, and a motorboat stopped beside me. The coach on board was wrinkled with worry, and shouted to me. “GO BACK! THIS IS A THUNDERSTORM!” he boomed. I came to my senses with a jolt, and swiveled my scull to face the opposite end of the lake. Two miles of open water lay mockingly before me, and I began rowing.

My boat sped up quickly, but needed more thrust. I hung on the oars, trying to stifle the panic seeping into me. Faster and faster, I surged along the cove, putting as much distance into each stroke as was humanly possible. Before I knew it, my frequency spiked, and rapidity was no longer an issue. The grey canvas above me flushed even darker. The first specks of rain flew into the lake. My heart was racing—either I paddled ferociously, or I would get struck by lightning. The worst place to be in a lightning storm is in the middle of a lake, a voice in back of my head kept whispering, and that’s where you are right now. I began to get tired, but the voice in my head was coxing me forward, telling me to go FASTER, DAMMIT! GET THE **** OUT OF HERE! SPEED UP! The oars struck water again, and again, sending me backwards with a monotonous combination of shoving and pulling.

Push, send, push send, PUSH, SEND. I was breathing hard, my heart heaving in a pattern of syncopated chaos almost on par with the rhythm of the boat. The scull sped across the lake, but my eyes were on the clouds. Without warning, the skies opened. A torrent of rain poured down, soaking me to the bone. The wind was now a merciless gale, shifting directions and pushing me back, back into the wild, uncontrollable maelstrom erupting on Lake Hosmer. My terrified mind could barely keep up with my crazily rushed body. I tried to focus but thought ten things at once. That insidious little voice of reason echoing through my brain reached me once more. What about how tired you are? What about the blisters you’re getting from sprinting so hard? What about slowing down? SCREW THAT! The other part of my brain angrily retorted. I bolted towards the shore.

In my peripheral vision, I noticed a flare of light, a white crack splitting the sky and raging down into the ground. The lightning had commenced. Less than five seconds later came a rumbling crash of thunder, God’s whip relentlessly scourging the atmosphere. The rain slammed into the lake in an unremitting shower, covering me, almost ridiculing the hat on my head for being so useless in the conditions at hand. I looked behind with an increasingly frequent tendency, but knew it was useless. JUST STOP AND ROW, I told myself, YOU KNOW WHAT’S BEHIND YOU! CONCENTRATE! My energy was leaving. I was getting fatigued, and I could feel it through my bones. Yet I was close, and I knew I couldn’t give up. I stopped the boat to take a ten-second rest, but a crack of thunder jogged me into action once more. Live or die, said the voice, your move.

I glanced around and saw the dock in sight. The coach from the launch was standing there, his limbs akimbo in an urgent signal to attention. I grew closer, and he screamed against the wind, “GO IN BOW FIRST! COME ON! THERE’S NO TIME!” The rain was pelting, the lightning was rapid, the thunder was loud and the air was practically a hurricane. I docked. A staff member came to my aid immediately, and I drew in my oars with the manic urgency of a psychopath. I ran and got my shoes. The counselors brought up the boat. My oars were stored, and I ran pell-mell to the dining hall, never once breaking stride. As I walked onto the deck, completely drenched, breathing so heavily I thought I might pass out, I realized I had survived. I sat down for breakfast and watched the storm ravage itself on the outside. You did it, the voice cooed, there’s your Head of the Hosmer. In ten minutes, I had traveled two miles.

I write this from the comfort of my lodge room, in dry clothing, waiting for the next row. Never have I been in such outrageous circumstances during a thunderstorm, and I can only hope I never will be again. However, rowing through that storm taught me several valuable things. The first is that even when exhausted, humans have more energy and durability than ever they realize. Second, that self-confidence is sometimes the greatest key to success. Third, and perhaps most important of all: that my boat and I, just like lightning, can get from place to place in a flash.