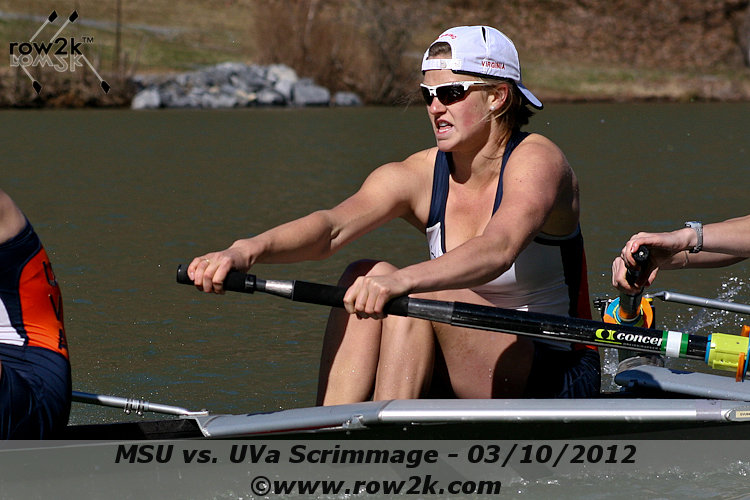 This week's row2k Interview checks in with Virginia senior Martie Kuzzy: she has won gold at Junior Worlds, raced at U23s, and helped put the Hoos over the top at the NCAAs. She's come a long way from Nordic skiing--the sport that took her brother to the Olympics--and tells row2k that rowing and family have taught her how success is sweeter when shared.

row2k - How did you get your start in rowing and why did you decide to row for Virginia?
Martie Kuzzy - I began rowing with the Minneapolis Rowing Club the summer before my sophomore year of high school. I used it as cross-training for Nordic skiing and running. After a successful season, and a lot of fun with the club, I was hooked!

As for Virginia, I had never heard of it until my first summer on the Junior National Team. A few of the girls at camp were headed there in the fall. I decided to take a last minute official visit during the fall signing week of my senior year and immediately fell in love. Everything about Virginia seemed perfect: the weather, architecture, southern hospitality, plus their rowing program wasn’t too shabby, either. Once I had visited Virginia, the decision was easy. The night I got home, I signed the papers and I haven’t regretted that decision since.

row2k - You've been on past Junior and U23 National Teams, what did you learn from those experiences that have made you the rower you are today?
Martie Kuzzy - The experience that shaped me the most was my first summer on the Junior National Team. Going into camp, I did not have much rowing experience besides a few summer seasons and a qualifying 2k. It was a bit of a shock when the aches, pains, and blisters began. It was a long seven weeks leading up to Junior Worlds in Beijing, and much of that time was laced with doubt and wondering if I even liked this whole rowing thing.

The whole experience taught me to be mentally tough. Since that summer, I find myself making comparisons and thinking, “well if I could handle that, then I can definitely do this.” It gave me a lot more confidence in my ability as an athlete and helped me realize that rowing can really take you places if you work at it. And sometimes if you stick with something, you may just turn out to win a World Championship.

row2k - You've had success at multiple levels of the sport, winning a Junior World Championship and NCAA Championship. What has been your most vivid memory to date and why?
Martie Kuzzy - My favorite moment to date was rowing into the beach after our NCAA team title. It was really surreal having crossed the line and immediately knowing we had finally done it, but it didn’t really hit until we rowed into an extremely enthusiastic crowd of teammates, coaches and family. It really put things into perspective. Just knowing how much the win meant to [UVA coaches] Kevin [Sauer], Steve [Pritzker], and all our staff who put in endless hours and years to achieve a championship title, is truly incredible. You work so hard to achieve something so personal, but in the end, it’s only worth it if you have people to share it with.

row2k - Your brother was a 2010 Olympic cross country skier, how competitive were you two growing up?
Martie Kuzzy - My brother, Garrott, has been my personal hero ever since I can remember. Considering he’s eight years older AND a boy, there was never much competition, except if you count card games or cribbage--which luckily seems to stand in my favor.

Growing up, things were more competitive for my older sister, Laura, and me--who are only two years apart. However, the three of us create an awesome network for each other. We have different strengths and are really supportive in our own ways. At any given time, I feel I can have a mentor, confidant, or motivator. Ultimately, my parents have been really supportive in all of our endeavors and that has helped the three of us stick together.

So, when it comes to being competitive in sports, I’m pretty sure I can still take my bro in running, but when it comes to pretty much anything else, unfortunately I’m going to have to let him take the W.

row2k - What are your strengths as both a student and an athlete?
Martie Kuzzy - I view attitude as my strength. Even though we dedicate what seems our entire lives to competing and studying, it’s only fun and hopefully successful if you stay positive while you’re doing it. Chances are you’re going to be doing the work either way, so why not make the most of it and at least (at times…pretend to) have fun? It really can make the toughest of workouts just a little more manageable.

row2k - What do you like most about the sport of rowing?
Martie Kuzzy - The people. Rowing is an incredible sport truly independent of all others. The camaraderie and teamwork, combined with an individual effort, creates something that is much greater than the sum of the parts. People in the rowing community are such a hard-working, passionate, and fun group—at the end of the day, that’s what I love most about the sport of rowing.

row2k - What are you studying at Virginia and do you have any plans yet for after graduation?
Martie Kuzzy - I’m graduating from UVA in May. At this point, my efforts have been focused on finishing out a strong final season with my team. Afterwards, I would still love to stay involved with rowing, either as an athlete or coach, but I don’t have any specific plans yet. Ideally, I’d find something where I can share my knowledge and inspire the next generation of champions.