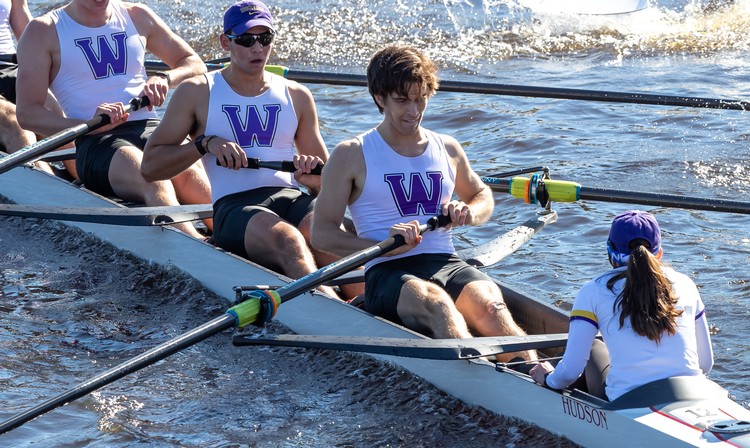 Steering the Charles in 2021

Next up In The Driver's Seat-row2k's column that sits down with the folks in our sport who keep the shells straight and add that extra something to the teamwork of a crew-is coxswain Piper Higgins.

Piper, a senior and Team Captain at Williams, is in her 10th year of coxing and currently "drives" the #1 ranked Varsity 8 in DIII Men's Rowing. She's coxed at Groton School, Cambridge Boat Club, and CRI, racing at both Royal and Canadian Henleys, Club Nationals, and NEIRAs before college, and this year she plans to steer Williams at the IRA Regatta's first-ever Division III National Championship race.

Let's take a ride with Piper, In The Driver's Seat:

row2k - What are the three most important things to being a successful coxswain?
Piper Higgins - My first rowing coach at Groton School, Charlie Hamlin, once put to me in writing: "There are three criteria for being an accomplished coxswain: athleticism, leadership, and coxing skills." 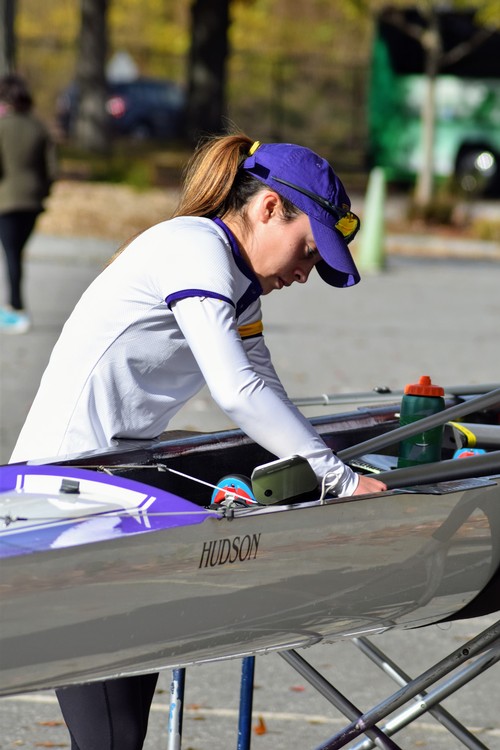 Athleticism is important for a variety of reasons, but primarily in that it allows you to empathize with your crew. I was a game sport athlete for most of my life, so I always try to find ways to get my heart rate up with the crew in the off-season, whether that's in running, core, or an occasional erg. By the time I'm in the lanes for a race, my crew trusts that I know what they're going through and that my athletic instincts are good.

Leadership is loving the sport and bringing the best out of your teammates. This looks different for different people. For me, it means making meaningful relationships with my teammates and coaches, giving credit where credit is due, and keeping a competitive spirit. There is definitely a limit to how competitive you want to be on the day-to-day, but channeling it to make every practice feel as important as it is will always serve a team well.

Coxing skills are the basics: steering, docking, running drills, and executing a race plan. I learned most of these by simply spending as much time in a boat as possible, coxing in summer programs and racing all the time. I spent a lot of my first years not speaking very much and just focusing on steering. Getting through bridges smoothly and docking well went a long way for me as a young coxswain.

row2k - What is your favorite drill to run with your crews? Any tips on how to do the drill well, for maximum effectiveness?
Piper Higgins - My best advice for running drills effectively is to know which aspects of the rowing stroke the drills are working. This was a revelation I didn't have until college, but it's important to know, for example, what exactly the half-slide pause is used for while you're calling it. Then, you can tailor what you're saying for the drill. Something else I try to do is stay quiet when the coach is talking. As few voices speaking at once as possible helps the rowers focus on what they are doing. I think coxswains get offended sometimes at the notion of "saying less." But it's practical, and shows your confidence, if nothing else.

My favorite drill is the "legs progression" (top quarter drive, legs-only, legs-body, full strokes), since it focuses on getting maximum length and connection from the catch. Winning crews know how to get the most out of each stroke, and this drill highlights that.

row2k - What's some of the best coaching advice you've received about your coxing?
Piper Higgins - Andy Anderson, who coached me during my last two years at Groton School, told me before I tried out for a summer team: "Just make friends with the crew. The rest will fall into place." I think this goes along with the idea of empathy. At the end of the day, you trust your friends and want to race well for them. 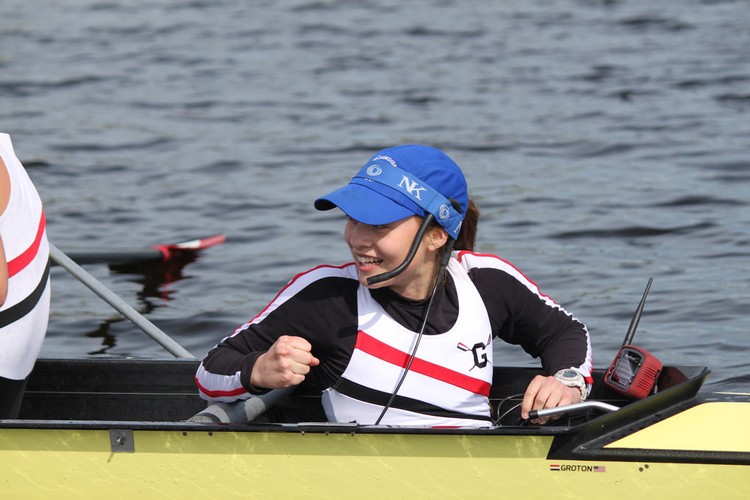 In her Groton days (photo courtesy of P. Higgins)

row2k - What is a mid-race call or move that you've made that you'll remember for the rest of your life? What did it involve and how did you call it?
Piper Higgins -A few years ago, I was racing in the Williams 2V at the New England Rowing Championships and we were going stroke for stroke with Wesleyan in the heats. We'd lost to them previously and had planned to make a big statement at the thousand-meter mark as a sort of revenge. Surprisingly, after the middle move we were still dead even, and I remember looking at my stroke seat and saying, "Even with Wes. Williams rhythm in two." We walked away and ended up winning by open water. It was special to have walked through them without some outrageous or aggressive call for power, realizing that simply trusting our rhythm was enough.

Racing the heats at New Englands in 2019

row2k - Can you tell us anything about how you learned how to make motivating calls?
Piper Higgins -The old adage, "information is motivation," is, I think, everything in coxing. Sometimes, I listen to game sport announcers and feel inspired even when all they're doing is verbalizing what's happening in the game. If the crew is rowing a fast split, the split is motivation. The margin is motivation. The distance remaining is motivation.

That being said, sometimes I like to make a call in the race that's in the form of a question. Recently in the Williams 1V, we were down on MIT by half a length, and I said, "Alright boys. Are you ready to walk?" which was a fun alternative to "Let's walk." We ended up coming back to near even and crossed the line 0.6 seconds behind them (needless to say, we are eager to line up next to them again).

row2k - Worst race/practice you've ever had?
Piper Higgins - I think it's common for coxswains to internalize losses, whether in practices or races. I can't name a specific race, but I remember in high school having a difficult time moving on from losses, wishing I had called the sprint earlier, relaxed my tone-just done something different. This is partially the curse of racing sports, that you pay for your mistakes and that the margins don't lie.

row2k - Best race/practice you've ever had?
Piper Higgins - I've been lucky to have been a part of a lot of great races, but I think my best race was the Grand Final at Canadian Henley with CRI in the U19 Men's 8+. This was 2016, and most of us were about to start our senior year of high school. 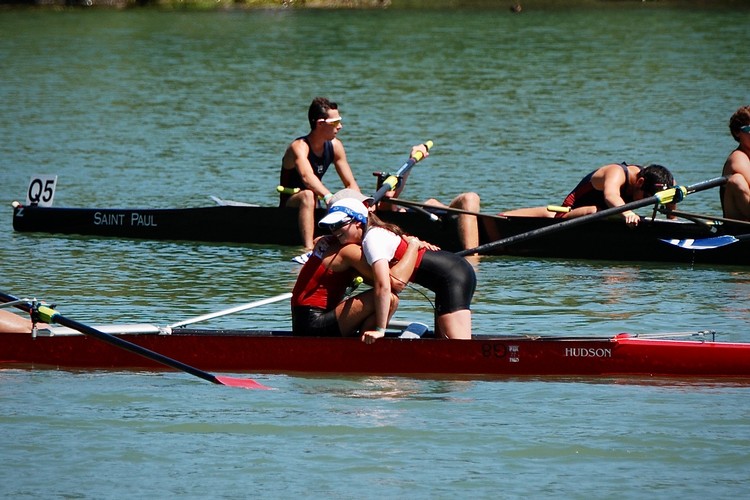 I remember that the evening before, our coach, Will Congram, had brought us to a peach orchard and we'd all hung out, picked peaches, and then gone to Lake Ontario to just wade in and relax. Will was already on to the mindfulness thing. The next day, we were sitting on the starting line laughing and joking with each other. We were in an awful-looking rig, buckets all over the place. We ended up winning gold, and I think everyone in that crew went on to row in college. I'll always remember that team, and how we struck the perfect balance between not taking ourselves too seriously and simultaneously approaching races with extreme focus. That's something we do well at Williams, too, and I think is a characteristic of teams at their best. 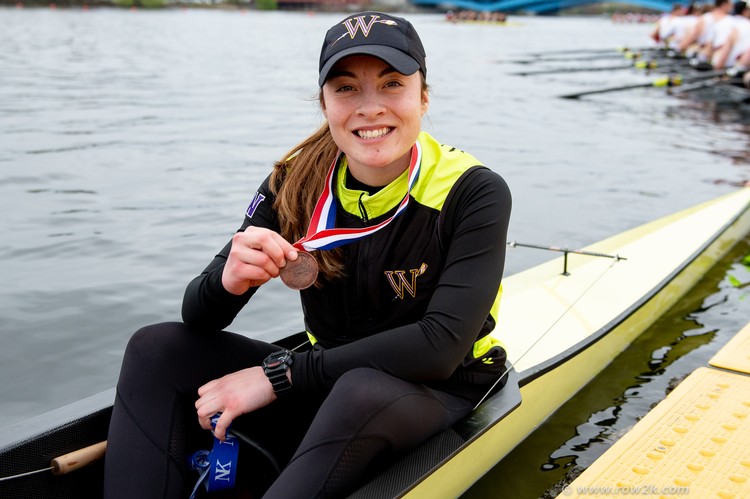 On the medals dock with the Williams 2V in 2019

In the Driver's Seat, with Danielle Swan