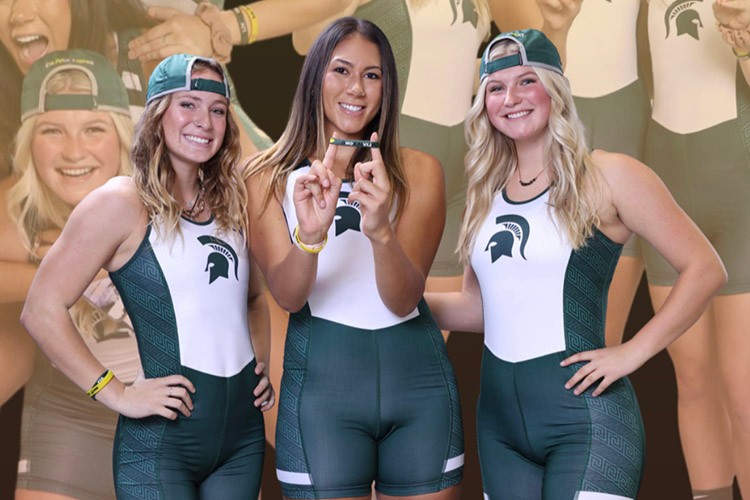 This week's row2k Interview is with Michigan State juniors Erica McIntee and Emily Petrosky. McIntee and Petrosky organized a fundraising campaign to honor teammate Olivia Long following her passing prior to the start of fall training.

row2k - Can you talk about Olivia as both a friend and teammate?

Erica McIntee - Olivia as a friend was someone you were always comfortable to talk to. I think that was because she was someone you could trust, and she had this warm and open personality. Something I really loved is how she would gather different girls on the team for us all to hang out outside of practice. I know she definitely helped me in branching out to get closer to some girls on the team.

As a teammate Olivia was someone who worked hard. She led by example and definitely showed me that if you put in the work, what you want out of it, will come.

Emily Petrosky - Olivia was the type of teammate that everyone strives to be. She remembered everything that you talked about and made you feel so welcomed. She was a quiet leader and led by example. She always worked her hardest and she would expect it out of you as well.

As a friend, she was more like a sister. She could always tell when something was wrong and would make sure you were okay, or she could tell when you had something exciting you wanted to talk about, and she would let you tell her everything. Like I stated before, she remembered everything, and it always made you feel special because she would remember even the smallest details. She was always smiling and when she laughed, it lit the whole room up.

row2k - You organized a boat fundraising initiative in her honor, how did that come about?

Emily Petrosky - The morning after Olivia passed, I was on a walk with some of my friends and we had said how cool it would be to name a boat in her honor. After the walk I couldn't stop thinking about the idea and knew that I wanted to make sure that it happened so that we could honor her in a way that would live on throughout MSU Rowing. I talked it over with my parents and they thought it was a great idea. Erica and I met with Coach Kim and told her the idea and she got us in touch with Jack Caporuscio at CrowdPower and we were given the information to start the fundraising page. We decided that we were going to purchase an Empacher because its yellow, and yellow was Olivia's favorite color.

Erica McIntee - When all of us in her class came together, we wanted to do things to honor her within rowing and outside of rowing as well. The idea of getting a racing shell came about. We also have made bracelets and hats that all of us teammates wear with the words “Liv On” which happen to be in her name oLIVia LONg.

row2k - How did the fundraising campaign go?

Emily Petrosky - The fundraising campaign went better than we could have ever expected. We had an amazing donor match $30,000 of the $60,000 we were trying to raise. That helped our fundraising so much and we are so thankful for that donation. Once the fundraiser went live, Erica and I were checking the website about every 10 minutes. It was so exciting to see the first $500 and then $1000 and then soon enough we were at $5000. It was unreal to see how many people wanted to help with this project. We had some larger donations, but every penny that people gave helped us reach our goal. When we began planning the fundraiser, we were expecting to have two donation periods to be able to reach the $60,000, but in just 8 days we were able to reach our goal.

Erica McIntee - When working with the person who helped us put the fundraiser up, they had said not to expect to get all $60,000 for the boat. We had thought it would take more than one go around of fundraising. We were able to spread the word around through word of mouth and social media to reach our goal. We are so appreciative to everyone who helped us reach our goal, no matter how much was donated, everyone made an impact. We could not be happier to have a boat to always honor Olivia, whether practicing or racing!

row2k - Are there any other ways your team is helping keep Olivia’s legacy alive?

Erica McIntee - We put on some other fundraising such as a 4 on 4 volleyball tournament; Liv had played volleyball in high school before coming to row at MSU. We also had sold some of the bracelets we made to the community and all of the money is going to a scholarship in Liv’s name. As mentioned earlier, we have hats that have the Liv On slogan on the back that we wear on the water so we see her name while rowing. And lastly, we are making sure to continuously celebrate her, for example we have already been planning some way to honor her on her birthday in late March.

Emily Petrosky - After Olivia passed our volunteer coach reached out to me about the Spartan Pride Alliance club that Olivia was very passionate about starting. I had been involved in the planning as an ally as well, but I knew that this was something that we need to make sure happened because Olivia was so eager to get it going. Our Volunteer Coach Maddie Shellgren did a lot of the heavy lifting and we were able to get the club started.

row2k - How has the fall/winter gone so far and what are your goals for the spring for yourself and the team?

Emily Petrosky - It was a big adjustment in the fall not having Olivia's smiling face and contagious laugh at practice early in the morning, but we found ways to feel her at practice. Everyone had their good days and bad days, but our coaching staff was amazing through this whole situation and were very understanding about anything we needed. As the weeks went on, we got into a normal schedule, and it started feeling more normal again. Our team did well in the scrimmages we competed in, and I feel that everyone began fighting a little bit harder and pushing just a little bit more. I am so excited to see how this spring goes because everyone is working and giving it their all during practices.

I am currently recovering from an injury, and with the help of our athletic training staff and coaches, the transition back has been smooth. A goal I have is to get healthy and to race in a Big10 Boat. Another goal I have for myself is believing that I can pull the splits I am working towards for the full workout. My body is capable, however sometimes my mind wanders and doesn't think I am able to, which I need to combat and believe in myself.

Erica McIntee - With the loss of Olivia happening just before the start of our first practices of fall, it put the start of practice on hold. All of our coaches showed support and found ways to help us during this very hard time and gave us all some time to just take life day by day. So, after about a week we began our fall training and I honestly think it brought our team closer together. Those who didn’t know Olivia (the freshmen, for example) showed us so much support.

During the fall/ winter seasons we have been really working on consistency and being able to either hold our splits throughout our pieces or even negative split. Now that we are only on the ergs, our big goal is to be rowing in time with one another. This way when we get back on the water, we are able to go into it being connected on our stroke.

Each week we also have a trait as a team to strive for. We came up with attributes we would find in the ‘Ultimate Rower’. So, for 16 weeks (for the 16 weeks until B1G Championships) we have a new word at the start of each week that we are trying to possess to help us become more like what we think describes the ‘Ultimate Rower’. So far we had words such as ‘mental toughness’ and ‘relentless.’ Then we announce who we think best emulated the trait on the team.

My goal for myself is to be able to keep pushing through mental barriers. It can be easy during hard pieces to let my mind wander and not stay focused on pushing myself through the piece each piece. I want to be able to focus on tackling one stroke at a time and keeping a positive mindset, along with being supportive of my teammates. You are in a boat with 7 other rowers so you’re not just rowing for yourself, we are rowing for one another and always remembering to row for Liv.