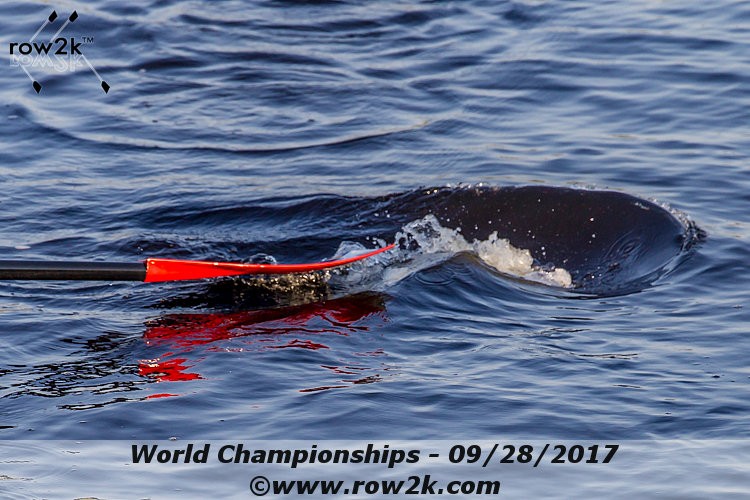 Christian Lindig from Chesterton RC in Cambridge, UK asks: "You have looked at blade work profiles and I notice that they show in general a slight dipping of the hand before the catch. This is generally considered an impediment for a fast catch, but there is also some speculation why we see blade paths that keep the blades so close to the water such that squaring requires dipping the hand: air flow between the feathered blade and the water adds stability. So low blades are not a sign of laziness but taking advantage of this effect. If this is true, I would expect that the "hand dipping" before the catch is more pronounced in small boats (1x, 2x, 2-) than in bigger boats. Bigger boats are more stable and would have less reason to rely on this and maybe pick a different trade-off. Do you see any evidence for this in your data, or is dipping the hands universal across all boat classes?"

To verify Christian's hypothesis, the BioRow database was analysed (n>37k). Fig.1 shows a typical profile of the blade centre movement during the stroke cycle built on the average data points: 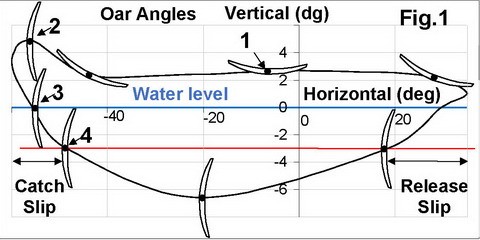 During the middle of the recovery (Fig.1,1), the average vertical oar angle was found to be about 2.5deg (Fig.2), which corresponds to 8-10cm above water level. At low rates, this was very similar at all boat types, but at high rates, the blade height became different: in 2x and 4x, it increases up to 3.5deg; in 1x, it increases less - to 3.0deg. In 4- and 8+, it remains nearly at the same level, and in 2-, decreases slightly down to 2.0deg. This means that at high rates, in small boats (1x and 2-), the blade moves slightly lower during the recovery than in big boats (by 0.5deg, or about 2cm, or 20%), which may confirm the first part of Christian's hypothesis.

Before the catch, the blade usually rises above the water to make space for squaring (Fig.1,2). This is because the half-width of the blade corresponds to 3deg vertical angle, so the common blade height during recovery about 2.5deg is not enough to square the blade. At low rates, the maximal "skying" angle (Fig.3,a) is slightly higher in sculling (about 5deg) than in rowing (4deg). At high rates, it increases by about 1deg: up to 6deg in sculling and up to 5deg in rowing. 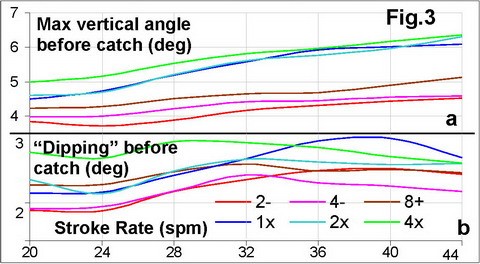 The amount of "dipping" of the handle before the catch compared to the middle of recovery (Fig.3,b) looks quite chaotic in various boat types: at low rates is was the highest in 4x, at high rates - in 1x. Bearing in mind that the difference between boats was 0.5-0.7 deg, but variation was much higher (SD=1.25deg), we can conclude that than the vertical oar angle increases by 2-3deg before catch (3-5cm), but no statistical difference between boats in "dipping" the handle was found, which disproves the second part of Christian's hypothesis.

What about the assumption that dipping the hands is "generally considered an impediment for a fast catch"? This is partly true: significant correlation (r=0.46) was found only between amount of the "dipping" and blade "slip" to 0deg (point 3 on Fig.1, where the blade centre crosses the water level). However, correlation with slip at -3deg (where the blade is fully covered, point 4) was lower (r=0.23) and statistically insignificant. Also, dipping the hands does not affect force application: its correlation with the catch force gradient was statistically insignificant and even slightly negative (r=-0.12, more "dipping" - quicker force increase).

The last fact emphasises a weak correlation between the blade slip after the catch and force gradient during the blade entry (r=0.05). This means some rowers put the blade into the water quickly, but hesitate to pull , while others may keep the blade shallow, but accelerate it fast, so the force grows quickly even with half the blade covered. Of course, the latter provides lower blade efficiency, because the blade "slips" and moves the water more than the rower-boat system. However, the former could be even worse, because burying the blade early without its aft-wards acceleration creates a backsplash and braking force at the entry, which decreases the velocity of the system. Ideal technique would be the combination of both points: firstly, a rapid blade acceleration (Catch Factor), then a quick blade entry into the water.