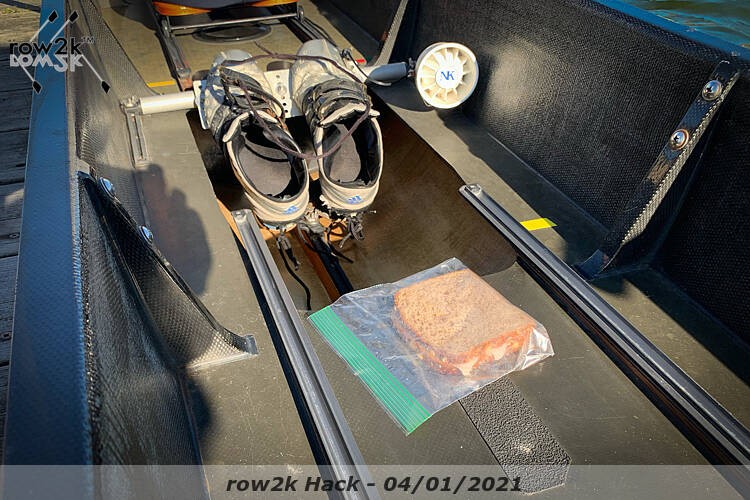 Seat racing may have been invented by the Sphinx of the Charles himself, but it was perfected on less rarified water than the Charles with the invention of the ultimate seat-racing hack: the Ham Sandwich of Truth.

Naturally, any kind of sandwich will do but we have it on good authority that ham, with a bit of mayo and lettuce, was what was in the coaches toolbox on that fateful and inventive day.

The principle of this hack is as easy as the how-to: instead of comparing a rower who is killing the boat speed to another rower, simply remove him or her from the equation—and the crew—altogether to demonstrate just how little they are actually contributing and replace them with, you guessed it, your lunch.

Brutal? Sure, but this is boat racing not little league, folks!

It is a simple 6 step process:

Step 3: take out the rower doing the slowing, and his/her oar

Step 4: also remove seat to avoid having it rattle around (and potentially damaging sandwich)

Step 6: re-run piece (in same direction, or not, it really doesn’t matter: it’s a sandwich!)

Note, unless you have multiple launches following the practice, this process will result in some very awkward moments in your launch as the athlete sits next to you and watches himself or herself get beaten by a stack of cold cuts and condiments—not to mention that there is also an oar in the launch now, which is problematic in direct proportion to the small-ness of the launch and the number of people in it.

We feel it is important to share here that this hack can be far more than a one-off act of coaching desperation. Indeed, for the full and most complete scientific data set, protocol would dictate running the seat race with the sandwich in each seat—placing it at each station in turn, thereby requiring 5 pieces in total when using fours, and 9 for an eight. When seeking this full data set by running a complete “sandwich matrix,” coaches should be aware that the boat may be difficult to steer when the sandwich is in the bow seat, but this should not impact the data since it is rare that the bowman is actually doing nearly as much as he thinks he is.

Interestingly, placing the sandwich at stroke, particularly in an eight, has very little impact on data variability, likely because the athlete in the seven seat is typically stoking the boat the whole time anyway. This is known as Seven Seat Stroke Syndrome and is most common in starboard stroked boats that attempt to put a port rower in an odd numbered seat.

True Sandwich Seat Race masters, however, eschew the “Sandwich Matrix” approach, employing the sandwich a single time with uncanny accuracy, employing absolute certainty that the target rower is, in fact, a complete anchor in the boat. But be warned, newbie Hackers: choosing the wrong athlete “to sandwich” will result in a crew that has fewer rowers and will, not surprisingly, actually go way slower. This has been found to call into question the genius—if not the sanity—of the coach.

On a final note, Sandwich Seat Race masters surveyed for this groundbreaking article were equally split on whether the sandwich could be eaten afterwards. Whether it was wrapped, either in foil or plastic, did not seem to matter, but there was a definite affinity for sandwiches used in freshwater seat racing vice those used on salty or brackish water—unless it was a ham or turkey sandwich, in which case the brining seemed to tip the scales towards more edible.

Now, if you have lunch meat tricks that you’ve managed to pull off, please share your tips--and hacks--in the comments below.