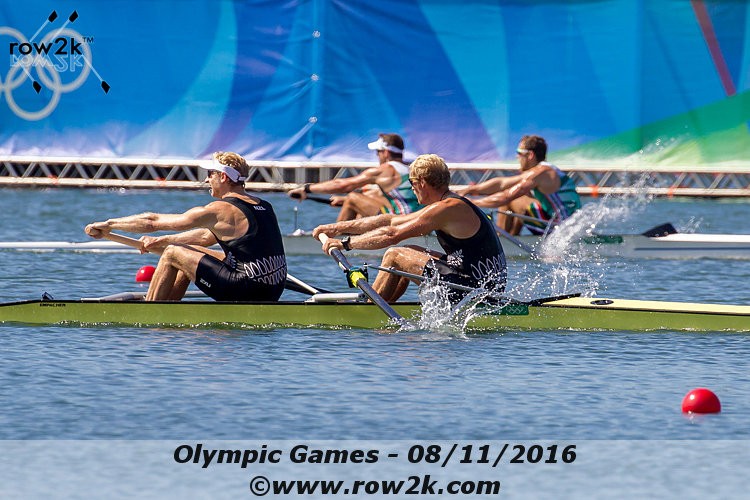 Kiwi pair of Hamish Bond and Eric Murray approach the

Historically, the rowing style had no strict scientific definition, which evolution could be found in the comprehensive book by Peter Mallory (1). Various features of rowing technique were used to describe the style:

A popular classification of rowing styles was introduced by Peter Klavora in 1977 (2), who defined three rowing styles: 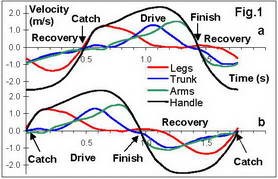 In this definition, timing of body segments was appended by another factor: emphasis (or relative length) of legs or trunk during the drive, so we used a quadrant method to classify those styles: the timing factor was represented as X axis, and emphasis - as Y axis (Fig.1). Klavora's styles fit three quarters of the quadrant, but the bottom-left corner was empty. This style has consequent timing and emphasis on the legs drive was used by successful Soviet scullers in 1950-70 (multiple Olympic champions Ivanov and Tyukalov), so we called it "Soviet" style.

With modern technology, the movements of the seat and trunk could be measured with transducers (Fig.2), so it became possible to quantify rowing style and introduce exact targets for the most efficient one. If we plot the segments velocities relative oar angle, the curves would look like mirror images, where the drive sequence (positive part values on top) is reversed relative to recovery (negative values at the bottom). Fig.3 shows charts of two rowers with sequential (A) and simultaneous (B) rowing styles. 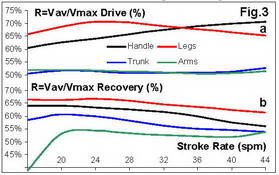 The rower A prepares his trunk earlier during recovery and approaches the catch with legs only. He has fast legs drive after the catch and increase trunk velocity in the second quarter of the drive. The rower B prepares trunk slowly on recovery and continues tilting the body until the last moment before the catch, then he "opens the body" early during the drive and spreads its movement across the drive.

It was found that all three body segments contribute nearly equally to the stroke length, about one third each: legs 33%, trunk 31% and arms 36%. However, the most of legs and trunk movements occur during the first two thirds of the drive, when forces are high, but arms work mainly at the finish, at low forces. Therefore, the average shares of total power production were higher for legs (43%) and trunk (33%), but lower for arms (24%).

How these measurements are related to coaching? What is the optimal rowing style in terms of contribution of body segments? Using video footage of 25 World best rowers in small boats, we have analysed the trunk angles relative to the vertical axis at the catch a1 and finish a2 (Fig.4). 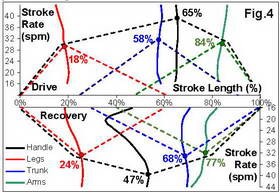 It was found that the average trunk angle at the catch a1 was 22.5o and a2 at finish was 25o, so the total angular displacement of the trunk was on average 47.5o. Assuming length of the trunk from hips to shoulders about 0.6m, it gives us 0.50m linear displacement at the top of the trunk, which corresponds to about one third of the average stroke length 1.52m measured with telemetry, so a good agreement of two methods was found.

Longer amplitude of the trunk movement allows better utilisation of gluts and hamstrings - the two biggest and strongest muscle groups, which helps to increase power production. However, it creates significant movement of the heavy trunk mass, increases inertial losses and vertical oscillations of the boat, so and drag resistance. Therefore, the trunk amplitude must be optimal. The average numbers of the World best rowers (±25o from the vertical) could be a good guidance.

What is the optimal sequence of body segments: sequential, or simultaneous?

An early opening the trunk after catch has a number of negative effects:

1. An attempt to extend the knees and hips at the same time may lead to a situation where the quads and hamstrings would work against each other, which creates energy losses and decreased efficiency. The reason is the following: both front and back thigh muscles are biarticular and connected across two joints: hip and knee (Fig.5). Parts of the quadriceps, Sartorius 1 and Rectus femoris 2 connect the shins and the pelvis at the front. In the hamstrings, the long head of the Biceps femoris 3 and Semi-tendinosus 4 connect the shins and pelvis at the back.

2. Activation of the glutes and hamstring muscles at sharp knee angles (less than 90o) generates a torque Th around the hips (Fig.6,a), which pushes knees down and folds them. This makes knee extension less effective and pushes the stretcher and stern down, which is not good for a smooth boat run. The combination of this effect with the point 1 above, gives really hard job for quads muscles, so they get burned very quickly.

To define the best position for opening the trunk, in 2008, I introduced a concept of the "transition point", which is a rower's position at 90o knee angle with the handle location approximately on top of the stretcher (Fig.6,b). Before the transition point, opening the trunk folds the knee, but after it, the knee down force Fk is directed below the shins and creates a positive torque Fk, which helps to extend the knee (Fig.6,c), so the quads and hamstring muscles work in a good and productive collaboration on knee extension. Quads could be even relaxed after the transition point to allow the bigger and more powerful hamstring muscles to finalise the knee extension job.

This phenomenon was experimentally confirmed in the best rowers using EMG. Therefore, sequential coordination of legs and trunk is the most efficient technique. The "transition point" is the best position to start using the trunk.

Originally, curves of body segments velocities (like on Fig.3) were used for determination of rowing style, but its evaluation was quite subjective. To simplify it and give unambiguous targets, in 2015 I developed Rowing Style Factor (RSF), which represents the style in a single number. RSF was defined as the ratio of the seat travel to the handle travel during the first 20% of the drive length: from catch till the transition point. The optimal RSF value was defined at 90-95%, which means only 5-10% of the handle movement could be contributed by upper body, and the main part should be provided by legs. This could be classified as a sequential rowing style with a strong trunk, which holds the force and starts its movements gradually just before the transition point.

RSF values lower than 80% (red zone in feedback with BioRowTech system) means too early "opening" the trunk (simultaneous style), and/or "grabbing" arms/shoulders. Values higher than 100% (blue zone) mean legs are going off too fast ("bum shoving") and losing the power through a "weaker" back.

Our BioRowTech system (4) is quite a simple, but effective tool for rowing technique improvement for rowers at all levels. It allows to evaluate the rowing style really quickly and easily, and also gives a lot of detailed information for experts, who could record data, produce average patterns, compare various rowers and samples, and analyse fine details of rowing technique.