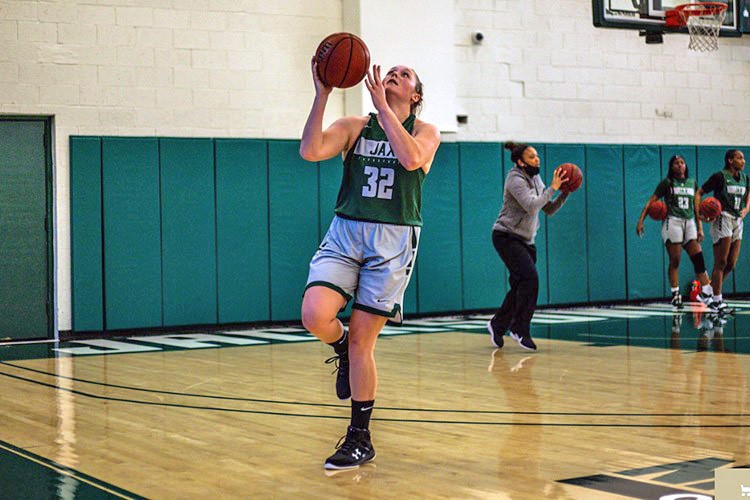 This week's row2k Interview is with Jacksonville senior Melanie Carter. We chat with Carter about suiting up for the JU basketball team this winter and more.

row2k - You started rowing as a novice at Jacksonville, what was your athletic background prior to enrolling and how did you end up there from Massachusetts?
Melanie Carter - I was a three-sport athlete in high school and I played field hockey, basketball, and softball. I was on the varsity basketball and softball teams all four years, and received the female athlete of the year my senior year. Over my high school career, I received over ten awards in for athletic ability, despite suffering an injury my sophomore year during a basketball game. I had torn my left ACL, Meniscus, and fractured the distal end of my femur. I had plans to go to college to play softball, but after another injury my senior year I decided against that. I really didn’t know where I wanted to go to college so, I decided to apply to schools who had waived the application fee and JU was one of them.

row2k - How did you find your way into the rowing program?
Melanie Carter - Before I moved in, I received a letter from the old assistant coach that talked about walking on the rowing team to become a D1 athlete. My parents saw it before I did and suggested I look into it, since I had been an athlete my entire life and was planning on not being a collegiate athlete. I toured the boathouse with my parents and was given a tour by one of the girls on the team, Jess Shipkowski. My parents thought it was awesome and an opportunity I couldn’t pass up, so I signed up to attend another meeting to learn more about the sport. From there on; I attended practices, made it through try-outs and got to go to Chattanooga to race at the Head of the Hooch.

row2k - You ended up on the JU basketball squad in December, how did that come about?
Melanie Carter - Basically, what happened was that the basketball team at JU had been plagued by injuries and only had 5-6 girls that were able to play. The athletic department asked coaches of the other female teams if there were any girls with a basketball history and any interest in playing. Word got around and I was definitely interested in playing basketball again. I hadn’t stopped playing and missed the sport, so I made the decision to do it. I met virtually with the basketball SWA, Lauren Cevis, and within 24 hours I was back in Jacksonville to play basketball. More info here.

row2k - What did you learn from that experience?
Melanie Carter - It was an amazing opportunity and a great experience, and I think it speaks to the type of students that attend JU. I wasn’t the only athlete to volunteer their winter break to come back to Jacksonville to play a sport none of us had played at the division I level before. I am so grateful for the experience and I am so happy to help out my fellow student athletes. Plus, the girls were awesome and super nice, which made it even more fun. 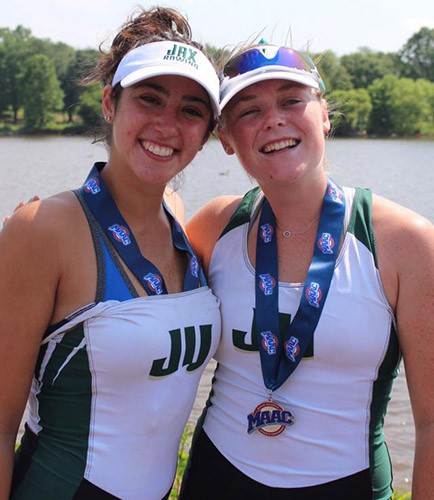 row2k - How well did you and your team cope with all the unexpected COVID-19 issues in the spring and fall?
Melanie Carter - Receiving word that our season was cancelled last spring was heartbreaking. We had just gotten off the bus from traveling for our training camp and were told that the MAAC conference championship was canceled. It hurt even more since that was supposed to be our redemption year after losing to our rival Marist in 2019. There were a lot of tears, but we made the most of the last days together before everyone moved off campus and back home. One of my favorite all time memories was doing our last 2k of 2020. We only had four seniors, so Coach lane let them draft eights lineups. I was in Madi Boyer’s eight and we ended up winning. It reminded me of why I love rowing.

This fall, practices looked extremely different but we still managed to have fun. For the most part the team remained safe from the virus until the end of the semester. As one of the largest teams on campus, I think that we handled the pandemic extremely well.

row2k - What do you like most about the sport of rowing?
Melanie Carter - One of my favorite parts of rowing has to be racing. The reason I love racing is the feeling of in the boat when everyone is in sync and working together; the sound of the oar locks clicking in unison and walking through other boats. Another thing I love is showing up to practices when we have partner works outs. I love supporting my teammates to push themselves beyond their limits and making them better than before. I think that you learn so much about yourself and how strong you are. It’s something that I hadn’t felt playing in any other sport.

What are you studying at Jacksonville and do you have any plans for after graduation?
Melanie Carter - I am studying Marine Science with an emphasis in Oceanography. My plans for the future are moving back home and finding a job before applying for graduate school.