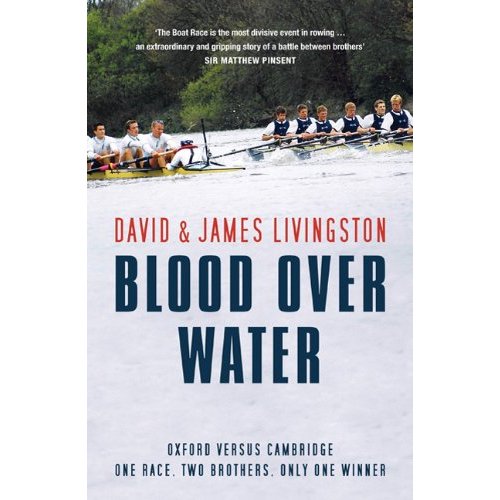 There are brothers in arms, and then there are brothers that will do (almost) anything to beat each other. David & James Livingston's book "Blood over Water" (Bloomsbury; $16.50, Amazon) tells a gripping story about the latter. This nonfiction book, which details the year leading up to the 2003 Oxford-Cambridge race, gives us the Livingston brothers, elder James at Cambridge and younger David, at Oxford, who both end up in their university's respective "Blue Boat," or top crew, to face each other in what, in this telling, is an epic contest, in an event already unique in our sport.

The Oxford-Cambridge Boat Race is a true institution, both in the sport of rowing and in GB life in general; it has been raced since 1829 (indeed, the coin used in the coin flip to choose lanes dates from that year, whew), and occasions rowing crowds of the magnitude that we typically only experience at the Head of the Charles here in the US, if then.

The book begins a year prior to the 2003 race, with the 2002 Boat Race; James, racing in the Cambridge Blue Boat, experiences a shattering defeat in the race when, far and away leading the race against Oxford, his German teammate Sebastian Meyer, who apparently misjudged his effort across the body of the 4-mile race, just about passes out in the last half mile. The finish line doesn't come soon enough for Cambridge, and Oxford's celebrated, underdog win cements James' decision to return for another crack at the event the following year.

David, by contrast, has a winning experience that same day, winning the reserves (i.e. JV) race as a member of Oxford's Isis crew. He's happy to be part of an Oxford sweep that day, but feels a pang for his brother in the losing Cambridge boat, foreshadowing what's to come.

The book is cleverly arranged into short sections, each narrated by one of the brothers, complete with a dateline and a location. In addition to making the narrative of "brother vs. brother" flesh, this device allows the reader a remarkably full picture of the events leading up to the 2003 Boat Race.

The narrative, and the book as a whole, is nearly perfectly balanced; as the year progresses, we learn about the brothers, their similarities and differences, their likes (and loves), and, in a treat for rowing aficionados, we get a very real sense of the amount of training, technical refinement, and differing approaches to preparation and racing taken by Sean Bowden and Robin Williams, the Oxford and Cambridge coaches.

Indeed, it's in the fully-fleshed out views of the respective Livingston's teammates, coaches and friends that the book truly shines. Perhaps appropriately for a book about a team sport, the Livingstons allow themselves to recede into the background as their teammates perform remarkable feats of oarsmanship and leadership, rare for autobiographical books. As readers, we see first-hand the conflict and tensions that invariably arise on teams, but we're also treated to the emails and letters that members of both teams send to each other, to keep each other focused, upbeat, and on the ball.

As an entertaining aside, the book doesn't skimp on good anecdotes either; the men (and women, in the persons of two coxswains) of the Oxford and Cambridge Boat Clubs have a good bit of fun to go along with their training, and if you've rowed in either the UK or the US in the last 10 or so years, you'll likely recognize some folks. The book is dishy, but in a good way.

Central to the story of course is the relationship of David and James to each other. (And as I read the book, I counted myself lucky that I had a sister that rowed, as opposed to a brother!) Through the year, as the brothers inch closer to earning a seat in each of their top boats (not a sure bet for either brother, which doesn't make the story less interesting by any stretch!), their filial bonds are strained. As the Boat Race draws ever closer, the brothers practically stop speaking to one another, but are in effect forced to as the GB press, who are over the Boat Race like ants at a picnic, seize on the storyline of the first pair of brothers to compete against each other in the Race in 100 years, and the Livingstons have to endure what feels like round after round of scrutiny from TV, radio and print media.

Of course, as college students, their lives are still entwined enough to where they HAVE to meet on occasion; well-told are the portions of the book where both David and James bring teammates home with them for events in London (where the Livingstons are from)… at the same time. The descriptions of hulking Oxford and Cambridge oarsmen trying hard to avoid each other in the Livingston's kitchen in Twickenham while preparing to race each other (and while the Livingston parents, even-keeled Dad and increasingly worried Mum look on) are extremely well told.

As David and James explain, in increasingly fraught terms, how they can place such a high value on success in a rowing race, a commitment that costs them social time with friends, the enmity of their long-suffering girlfriends, and their relationships with their sibling, we come to the core of the book, and the age-old question: what does it matter if you win (or lose) a rowing race? Not surprisingly, each brother has a slightly different view on this, but they each reach the same conclusion: it's worth it because of the effort all those involved have committed. Here's James' view:

"Why did it matter? Because we cared about it so much. Why did we care? Because of how much we put into it[…]. I couldn't choose not to care. If you stop caring where does it end? A smile becomes just teeth. Children? -- a biological inevitability. Love? -- a release of hormones in the brain. Death? -- the balancing of the equation."

I doubt this sentiment would truly surprise anyone who has tried to do a good job at rowing or anyone who has been on a rowing team that at any point banded together to try to achieve something extraordinary.

It also doesn't hurt that the 2003 Boat Race had a host of other compelling stories to go with it; a near-tragic training accident on the Thames just days before the race that cost Cambridge their bowman, Wayne Pommen, lost to a broken wrist; the polar opposite of the strokes, the towering German Tim Wooge in the Cambridge crew and wispy, near-lightweight Matt Smith of Oxford. (It is Wooge who has the single best line in the book; at the post-race banquet, he recognizes the members of the winning 1943 Cambridge crew in attendance; the crew was not able to race in London that year, "as it was under attack from my countrymen at the time. My apologies," says Wooge, to laughter.)

As you read the book, as the pressure on the Livingstons and their crews ratchets up, and you begin to see the true human cost of pursuing success in the boat race, it seems almost unfair that there should have to be a winner and a loser in the contest; nevertheless, there is, and while we won't spoil that part of the book here, I will say that the portions of the book describing the 2003 Boat Race (from inside both crews, which heightens the experience) are among the most engaging prose I have read on rowing.

The Livingston brothers tell a compelling tale; I confess that, prior to reading this book, I held a Yankee-centric, skeptical view of 'The Boat Race.' "Blood over Water" has changed that, and while I may not necessarily favor one university or crew over the other, I did come away from reading the book with a much deeper appreciation for not only the tradition and history of the event, but the level of passion it inspires in the oarsmen and women that participate in it; these crews are truly forged for battle at an incredibly high level, but they are mostly just college kids all the same, with the attendant questions, doubts and tribulations.

If you like a good rowing story extremely well told, "Blood over Water" will not disappoint. 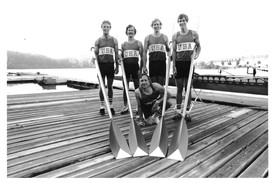 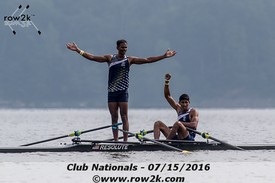 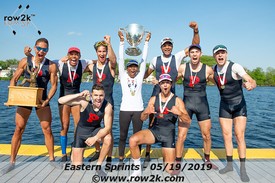 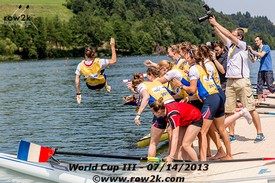 Stanford to Cut 11 Sports, including Men's Rowing, Women's Lightweight Rowing
Get our Newsletter!
Enter your email address to receive our updates!