row2k Features
row2k features > Coxing
Fixing the Set, One Detail at a Time
A non-holistic approach to set 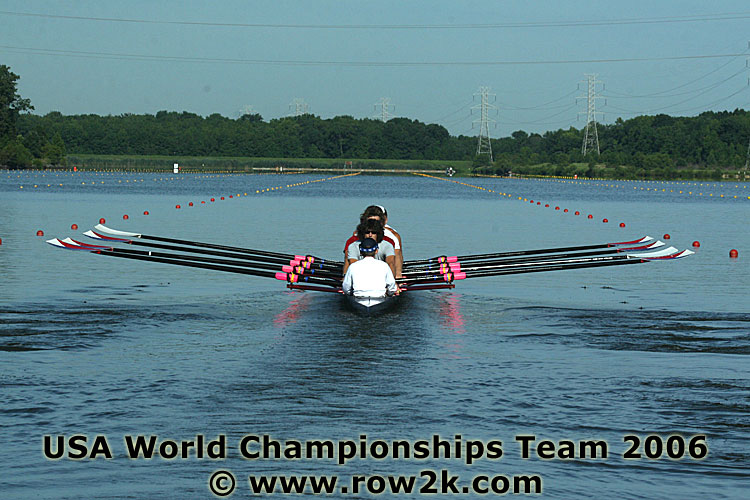 Fixing a boat's set can be fiendishly complicated. Setting a boat properly depends on so many things -- and so many things, in turn, depend on the boat being set. It may seem counterintuitive that one of the ways to solve something as broad and overarching is to go at it in small details.

"Uh-oh," I can hear readers saying, "don't tell us that Rob -- of all people -- has suddenly gone all deconstructionist on us." Not likely. Banks will be charging modest and reasonable fees long before that happens. However, because the elements of the set are so interrelated, isolating the pieces will give you a leg up diagnosing and solving it. (Between you and me, this only sounds like deconstructionism, and besides, I really only mention the word so that the search engines will pick up on it.)

Is the boat always down to the same side, or does it flop from port to starboard? Is it off every stroke, or perhaps once in every three? Or five? Or seven? Most important, at what parts of the stroke is it down? Stroke side or bow side? Is it down on the catch? At the release? If on the slide, is it at the beginning -- when the rowers first move their hands away -- or later, when the bodies extend? Does it begin as slight lean during the slide and then swoop down to one side at the catch?

Just asking these questions may lead you to an "eureka" moment. Lowering the stroke rating until you are able to isolate the stagger points will help the analysis. Set problems tend to become more pronounced at lower ratings, so you may be able to link it to causes. (This is one of the reasons coaches like doing low rating drills; they will be doing the same analysis from the launch.)

After you have isolated those points of the stroke when the dipping occurs, attempt to correlate it to the timing. Although a coxswain obviously can't see a lot of things that are going on in the engine room; there's a surprising amount you can discover by process of elimination. Try rotating through the sixes at low rating with the pair that is sitting out keeping only a light touch on their oar handles (i.e. not really setting the boat so that it is free to dip to one side). If the boat has set problems only when certain pairs are rowing, that may lead you to certain conclusions. The pair(s) sitting out when it happens are not the causes. (i.e. if the boat dips when bow pair is sitting out, when three and four are sitting out, and when seven and stroke are sitting out, but doesn't dip when five and six are sitting out, then you need to look closely at five and six.)

Are everyone's eyes in the boat? Are the heads level and the eyes up? Throughout the entire stroke? Are the knees going down together and the legs staying parallel? (This is one of the most likely "unseen causes.") Uneven knees or non-parallel legs can cause shifts and twists in the upper body, which can do all kinds of things to set and timing (as well as to power application). Is the power even on port and starboard? Are the sides even throughout the drive?

For the unseen causes, make some test calls and see whether they improve the set. Does calling, "Eyes to the stern, heads level" or, "Knees down together" help? Bear in mind that the solutions you find may still only be a partial solutions; there may be multiple causes. Beware of stopping after just one fix.

Are the arms coming away assertively and together so that they are straight and fully extended before the bodies move? (One way for the coxswain to check this, even without being able to see the hands, is to watch that the oar shafts stay parallel at every point in the recovery.) Reducing upper body motion during the slide is vital to the set, if the arms are still extending as the bodies start down the slide, it will make the shoulders unstable.

Factors affecting the set will be as varied as there are boats on the water. However, per Ockham's principle of looking for solutions in the most likely places, here are a few of the more usual combinations of symptoms and causes. It is by no means a comprehensive list.

Down at the catch -- often caused by: uneven catch timing, hands dropping at the catch. If the hands are dropping, it may be because the heads (eyes) and shoulders are dropping. Uneven pressure against the footstretchers can affect upper body position, which in turn can affect hand height. (How's that for a long string of causality?). As an example of another long causality chain, uneven tap-down amounts at the beginning of the recovery can lead to uneven hand heights at the catch.

Down at the release -- Release timing? Uneven depth of oar blades? Check to see if a blade is being "feathered out of the water" i.e beginning its feather while still partly under water. It will tend to throw a lot of white water around if it is, and come out of the water with a distinctive "whumpf."

Down (or just plain wobbly) during the recovery -- Are hands moving in an arc instead of level? (Check to see whether blades stay an even distance from the water.) May be caused by uneven tap-down distances. Try calling something like "level hands" or "straight out and back" or "on the tabletop." The tap down problem is best fixed from the launch.

No single one of the above causes is usually the answer; the answer will usually be a combination. (Which brings us neatly back to the holistic approach after all.) Set is incredibly complex, an integration of the whole, built on layers of details.