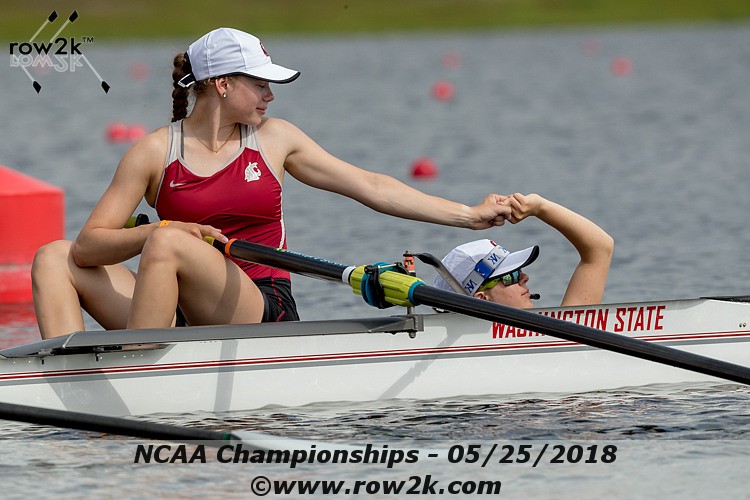 Coxing a bowloader is an exhilarating experience.

Despite the comment above, it is indeed possible for coxswains of bowloaders to be the same kind of diagnostic coxswains as when they can see their rowers and oars in a sternloader. Feel and hearing can be made to tell as much as sight. For most coxswains this develops pretty quickly, especially if you have had experience in sternloaders which you can then visualize once they stick you under the focsle. The hull of a crew shell resonates with many different sounds and vibrations. Lying as you are against the skin of hull, you can make it "talk to you" in audible and tactile subtleties often overlooked in sternloaders. The pitches of the seat wheels vary enough among your four rowers that you will soon be able to identify by sound which seat may be rolling early or late, and even -- with some practice -- whether the wheels are rolling clean in their tracks, or binding against the sides (this can tell you whether a rower is torquing too much into the rigger, and even whether keeping his/her knees parallel). Oarlock sounds offer a wealth of information; their vibration carries strongly through the gunwales (revealing such things as finish timing and feather rollup).

Coxing a bowloader is an exhilarating experience. If you get assigned to one, relish the opportunity. Not only are they faster and more stable, they feel faster. You are closer to the water, thus you really feel the surge when they pick up and go. Talk to as many bowloader coxswains as you can, and learn their tricks of the trade; there are many more of them than will fit in this column.

During practices, take the occasion to sit up and look sternwards briefly (you can do this without upsetting the boat if you are careful) to check that what you think you are hearing and feeling reconciles with what you see. Pay particular attention to what the coach is saying about rowers' technique, and link this with what you are feeling/hearing.

Steering a bowloader is different from steering a sternloader (particularly when your 3 seat -- I'm not mentioning names here; you know who you are -- mischievously takes his left foot out of the stretcher and clamps it against the steering cable). Although the coxswain enjoys an unobstructed view ahead, the visual cues of being able to align the whole boat with a point on the horizon are missing. This can lead to oversteering on the first few outings, particularly if there is any wind at all. It is helpful to pick a point even further ahead than you might otherwise do in a sternloader. Also, the tiller (because the cables run almost the length of the boat through multiple fairleads and cross over themselves) has a mushier "touch" and deprives you of the sensory feedback of the rudder connecting to the water. You can help yourself a little by checking constantly that the cables are tight (think guitar strings). Loose cables exacerbate the problem. (Remember that in a bowloader, your Stroke not only has an unobstructed view of your wake, but also can see every movement of the rudder capstan -- there's nowhere for a coxswain to hide.) You will get used to the steering idiosyncrasies pretty quickly, however.

Your oars are longer than you think they are. Coxswains in sternloaders have them in sight, permitting precise gauging of their proximity to buoys, other shells, and bridge abutments, thereby allowing scope for virtuoso displays of steering. This temptation can be fatal in a bowloader until you truly have the hang of it. (Ask any coxswain -- list available on request -- who has accidentally "brushed the wingtips" against the Anderson Bridge). By the same token, landing a bowloader is trickier than it first looks because there are fewer cues for gauging the boat's entire relation to the dock.

Lastly, some malevolent god of geometry has decreed that -- no matter where in a crewshell the coxswain sits -- there shall always be one oar perfectly situated to splash him or her. In sternloaders, the three (or seven) oar enjoys this retributive option. During one of my early forays into bowloaders (it happened to be a fairly choppy day), I mentioned that, at long last, I was immune from dousings -- vertent or inadvertent. Without commenting, my Stroke -- with the ease born of long practice -- squared his oar on the recovery and slapped a perfect curl of cold and salty backsplash arcing high over Two's rigger straight down the back of my neck. Point taken.