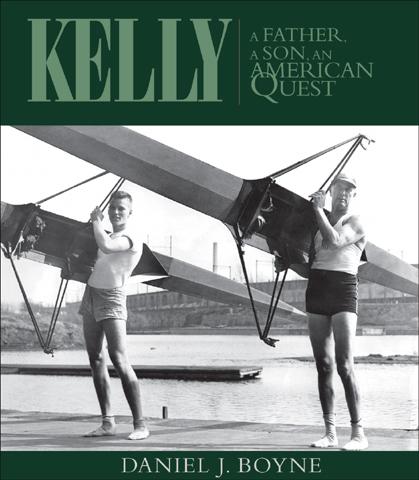 High above the banks of the Schuylkill River, a few miles upstream from the Philadelphia Museum of Art, rests the imposing figure of a giant green man, the bronze statue of an oarsman in a single scull. Captured in mid-action, holding onto his oars and gazing off toward the upstream reaches of the river, the waterborne Olympian looks as if he is trying to decide whether to take another stroke or let his boat finally come to rest. The stoic expression and chiseled physique suggest the appearance of a Greek hero, riding on the waves below him, or perhaps some sort of a sphinx - half boat, half man, a riddle waiting on his sealed lips.

At the base of the statue, there is a simple inscription that reads:

The story of Jack Kelly, Sr., and his long quest for international recognition in rowing is a colorful legend that has been passed along so many times in the sports world that it has become, like his statue, somewhat larger than life. Yet among the general public, the name Kelly registers very little, if anything, unless it is in reference to his famous daughter, the actress Grace Kelly. Most people are unaware of how this Philadelphia patriarch rose from working class Irish roots to become not only the most famous American oarsman of all time, but a millionaire businessman whose brick company was one of the largest on the Eastern seaboard. Most are unfamiliar with his noteworthy political career, which paved the way for the Democratic party in Philadelphia, or with his two brothers, George and Walter, who worked beside him in a local carpet mill as children and became famous as well-one as a Pulitzer Prize-winning playwright and the other as a popular vaudevillian. Many do not even realize that Kelly Drive, the long road that runs along the west bank of the Schuylkill River, was named after his equally lauded son, Jack Jr., or "Kell".

This is not a book about Grace Kelly, of which there have been many. But once, when the movie star-turned-princess was asked if she would ever like to write her autobiography, she replied, "No, but I would like to write one about my father, in which I am only a postscript." Although she may have eclipsed her father in international fame, this humble acknowledgement is a tribute to a figure that many of Grace's biographers have often dismissed as yet another difficult parent of a struggling star, a tyrant who had little regard for his talented middle daughter. Similarly, he has also been accused of using his son Kell as an "instrument of revenge" against the English aristocracy that forbid him from entering the prestigious Henley Royal Regatta. Some of this is myth, and some of it is truth. As I hope this book will illustrate, the negative characterizations are insufficient at best. First, they fail to take into account the significant cultural changes that took place between the two generations of Kellys, including two world wars and the Great Depression. Second, they fail to acknowledge how Kelly, Sr., laid the foundation for his children's success, literally brick by brick, despite any shortcomings he may have had as a father. Finally, they lack the perspective that, for better or worse, most successful oarsmen are single-minded by necessity, if not nature.

This last part of Jack Kelly's identity is perhaps the most important key to understanding the duality of his character, for rowing was the cornerstone of Kelly's life and the initial way that he developed the qualities of self-discipline and perseverance that lent him the ability to overcome many formidable obstacles in his adulthood. A gifted athlete who could have chosen any number of physical disciplines, Kelly settled on this ancient and rather odd sport where the athlete cannot see who or what lies ahead, and contact with an opponent is strictly forbidden. Under such restrictions, the oarsman's focus almost by necessity travels inward, requiring intense concentration and a certain moral resolve. This mental and physical training may have given Kelly the ability to succeed at a high level in various pursuits, although it may indeed have also left him blind, at times, to the impact of his success on those around him. Donning a green cap to proudly signify his Irish lineage, Kelly also chose a color that was appropriate in representing many other aspects of his character: his naivet?, in assuming that he could tackle any task put before him; his sense of competitive envy toward his rivals; a serenity that came from achieving financial well-being, and finally; a sense of renewal in witnessing the success of his four children-particularly his son, Jack Jr. Roughly stated, these four qualities represented the four seasons of Kelly's life.

More than a few of Jack Kelly's early biographers and sycophants have painted him as a Galahad who could do no wrong. This, too, does not do him full justice, or render him in the three dimensions that he deserves. Like the impressive statue that rests along the Schuylkill River, Kelly was indeed a giant, an almost mythical presence (in the early days of his athletic career, he was even referred to as "The Iron Man"). But he was also very human, made out of flesh and bone, emotional and vulnerable, and as prone to error as the rest of us. More importantly, for this story at least, it was how Jack Kelly dealt with his own shortcomings and the social bias against him that shaped his character. Only by turning these into sources of motivation that was he able to achieve his impressive feats in athletics, politics, and business.

Early on in the writing this book, I was handed a copy of Jack Kelly's memoir, describing what he thought were the important events in his life. The manuscript is by and large a sportsman's reflection, a tidy, 20-page narrative focusing on his rowing exploits. It also outlines the colorful Kelly family history that came before and after him. If a person's writing is any indication of their ego, Jack Kelly, Sr., was a fairly modest and even self-effacing man. He clearly wanted his accomplishments to be recorded, for he viewed much of his life as a romantic quest. This book tries to reflect that simple wish, without getting overly sentimental or critical of its subject. As anyone who has ever tried to row a single scull knows, the boat doesn't move forward too well if you can't keep it balanced. Nor does a book.

As an athlete and, in particular, an oarsman, Jack Kelly had few rivals, if any, who accomplished what he did. The one exception was his son, Kell. Jack Kelly, Jr., is more than just a footnote in this story, he is nearly the entire second act. To the extent that he succeeded in carrying out his father's mission for him, Kell might easily be viewed as heroic in his own right, and deserving of a full treatment of his own. For the sake of narrative closure, however, I have chosen to end this story at the completion of Jack Sr.'s boyhood dream, at the Henley Royal Regatta in 1947, and leave the remainder of the Kelly saga for another time, or perhaps another author more willing to take up the daunting task of examining the lives that Kelly Sr. left in his wake.