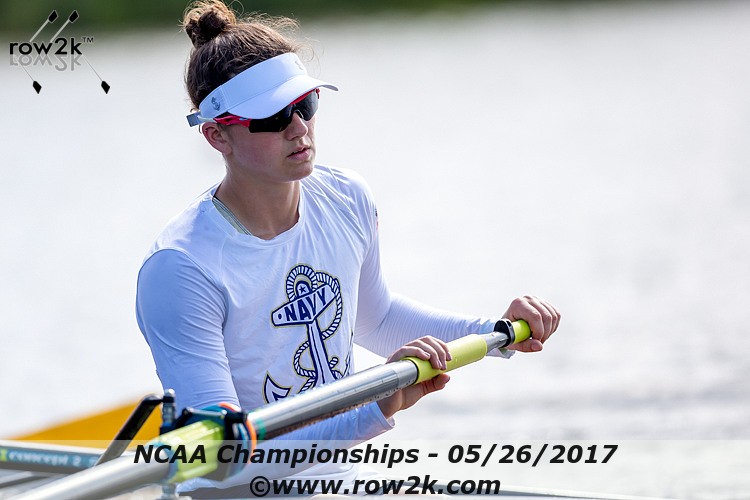 This week's row2k Interview is with Naval Academy senior Ashlyn Dawson. We chat with the Dawson on what it means to row for Navy and her experiences racing for, and winning the King's Cup last summer at the Henley Royal Regatta.

row2k - How did you get your start in rowing?
Ashlyn Dawson - Growing up, I primarily played soccer. I played competitively on my high school team as well as many travel teams. During a game in my freshman year of high school, I went in for a header and instead of hitting the ball on the front of my head, it hit the top of my head. I had obviously hit head balls before that, but that time I immediately felt something was wrong. I ended up with a pretty upsetting concussion, which took me out for a couple months. I was on track to recover in a timely matter. However, while sitting out in gym class, someone kicked a ball across the gym and hit me in the head again... It took me 9 months to fully recover from that concussion, so I decided it was best to put my cleats away and find a sport that wouldn't put my health at as much of a risk.

I started trying out a lot of different sports, volleyball, tennis, golf, but none of them really did it for me. My cousin rowed in high school and in college at Cornell, so he suggested I try it out. At the time I was living in Richmond, Virginia and rowing was an enjoyable thing for me to be involved in. However, it wasn’t until I moved to Annapolis, Maryland during my junior year of high school, that rowing became my main sport. 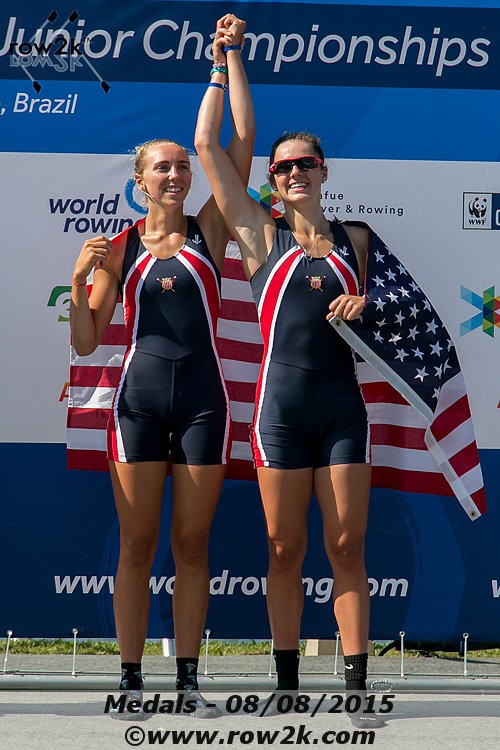 row2k - You raced at Junior Worlds in Brazil, what was that experience like?
Ashlyn Dawson - Wow, what an experience coming out of high school. At this point I had only been competitively rowing for approximately two years, so to have the opportunity to represent the United States on the Junior National Team was a huge shock and honor. I felt really out of my league going into the Junior National Team tryouts, so when I made the team and showed up in another country, surrounded by the best rowers in the world from my age group, it was a big reality check. To row at that level, surrounded by teammates who want to win a medal for their country, is really something special. Being 2015, the year before the 2016 Rio De Janeiro Olympics, rowing on the Olympic course every day was indescribable. My most memorable moment was sitting at the start line of finals, and looking up to my left to see the Christ the Redeemer statue in the background looking down on my pair partner and I.

row2k - How did you decide to attend the Naval Academy?
Ashlyn Dawson - The military has been a consistent part of my family history dating back to the Revolutionary War. This sense of service has had a large impact on my family. Currently, there are four Dawsons between West Point and the Naval Academy. My sister is a Plebe (freshman) at USNA and on the team with me, my two cousins are a Yuk (sophomore) and a Cow (Junior) at West Point, and I am a Firstie (senior) at USNA. I had two uncles and one cousin graduate from USNA. Many more uncles, aunts, and cousins have served our country in different services, so it was only natural to follow in their footsteps. It was not until my junior year of high school that I started to think about the Naval Academy as somewhere I wanted to go to school. I had just moved to Annapolis, and I started talking to my Uncle about his past career and my cousin's upcoming one. I saw the opportunities that joining the Navy presented, and the type of person the Naval Academy pushes you to become.

row2k - In your opinion, how does rowing at Navy differ from other universities?
Ashlyn Dawson - Just at the Boathouse, the history that has come before us is all over the walls. We have oars from Olympic boats and names on walls that are honored all over the country for heroic actions. It becomes something we are all so accustomed to. Rowing in boats that are named after heroes becomes real when alumni, whom the boats may be named after, or when other alumni come and tell us about their classmate who passed, visit and share their stories. Everyday at the end of practice, as we row back to the boathouse, we pass the Naval Academy Cemetery and Columbarium, where past teammates have been laid to rest. As we row by, we honor them by taking a “Five and Glide,” wherein we take 5 hard strokes and pause at the finish as we glide with our oars up, in a form of a salute to them. It may seem odd to the typical bystander, but something so simple means a lot to remembering those who have come before us and stands as a daily reminder as to why we are here. 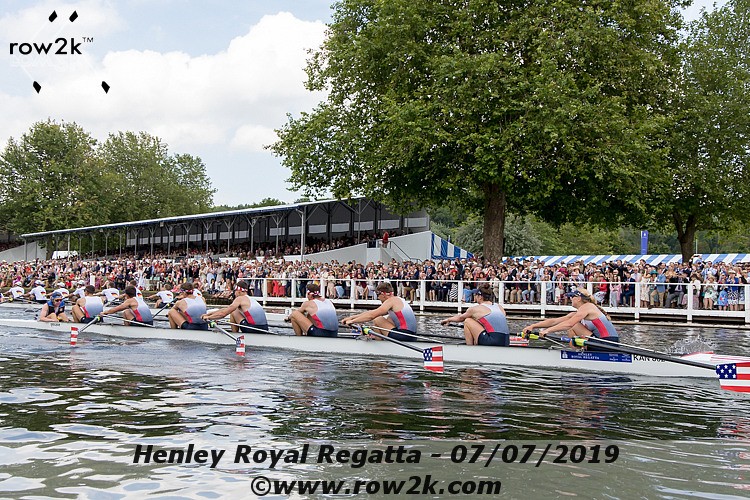 row2k - You raced in and won the King's Cup last summer at Henley, what was that experience like?
Ashlyn Dawson - It was unreal! Having rowed for the Junior National Team, I thought I had experienced a similar level of rowing, but I was far from right. Being at the Naval Academy, we already have a sense of service ingrained inside of us, but representing the United States Armed Forces was a different feeling. For the rowing community, The Royal Henley Regatta is already such a prestigious regatta to be a part of. Originally our team was just doing what we love to do, which is row, but as outsiders began approaching us and thanking us for what we do, a larger perspective was achieved. I think by the time we started racing the King's Cup Regatta, myself and the team started to really understand that we were really rowing for more than ourselves.

row2k - What are some of your most vivid memories from Henley?
Ashlyn Dawson - As we were sitting in the stands at the awards ceremony, my boat and I were sitting next to a couple people that seemed to be good friends talking amongst themselves. We were in our dress uniform for the ceremony, and the group of people next to us started asking us about what the different parts of our uniform meant. I later was scrolling through Instagram and found out I had been talking to Olympians like Emma Twigg and Hamish Bond. It is still crazy to me that I was able to be in the same stands as people that are so well known for their rowing accomplishments.

My most vivid memory comes from the final of the King's Cup. I have had the chance to go back and watch the video of the race a couple times, and each time I remember my thoughts at those moments. Coming off the line we were up and cruising through the barrier, but as we were moving along in the race Germany started overtaking us. I remember about halfway through the race thinking about how we had to go now to finish it off. The last 700 meters was when we started really coming back, and in that last 150m as we were coming through the Stewards Enclosure, the race was really a battle. I just kept thinking about how we needed to pull through to the finish. Finally, after the signal sounded we all realized we did it. I will never forget being in a boat and race like that. 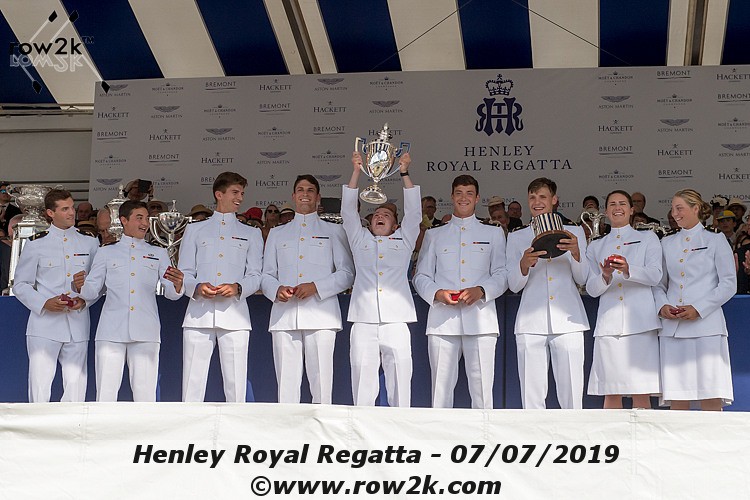 row2k - What are you studying at Navy and do you have any plans for after graduation?
Ashlyn Dawson - I am going to graduate majoring in General Science this May. Upon graduation, I will commission as a Surface Warfare Engineering Duty Officer option. In January, I selected the USS Kearsarge LHD 3 out of Norfolk, VA and will spend my first 30 months of a sea tour on that ship. As a Surface Warfare Officer, I will be leading a division of sailors to accomplish the mission of the Navy as we are at sea and on shore. After two sea tours, 30 and 18 months long, I will have the opportunity to take my Engineering Duty Officer (EDO) option to attend graduate school and then eventually become an EDO. An Engineering Duty Officer is responsible for the "design, acquisition, construction, repair, maintenance, conversion, overhaul and disposal of ships, submarines, aircraft carriers, and the systems installed aboard."

After graduation in May, I will attend BDOC, Basic Division Officer Course, where I will learn the basics of navigating a US Navy vessel. Because I am an Engineering Duty Officer (EDO) option, I had the opportunity of applying to attend Dive School. In October I will be attending Dive School in Panama City Beach, Florida and learn the skills necessary for underwater ship repair and maintenance.