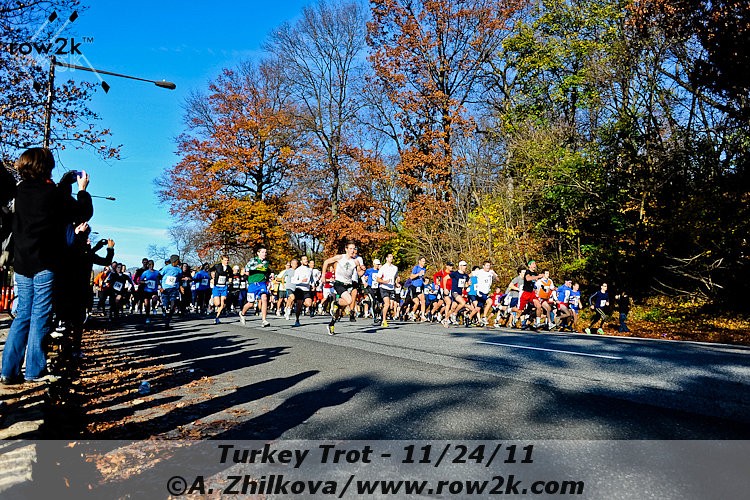 When it comes to keeping holiday traditions, the rowing community in Philadelphia holds its own. From the Fourth of July Independence Day Regatta, to the Boathouse lights that shine onto the Schuylkill River all year and become a must-see holiday light show, Philly rowers embrace celebration.

And Thanksgiving has a special place on that holiday calendar.

Every Thanksgiving morning from 1899 (except for two war year interruptions), no matter what the weather, somewhere between 200 and 250 rowers - and a few guests - line up in front of the Malta Boat Club on Kelly Drive and dash off on a cross country run just over five miles long (5 and 5/8 miles to be exact).

It's officially called the Schuylkill Navy Run, but it's better known as the Turkey Trot.

It's a cross country foot race of sorts, that, like many other things particular to the Philadelphia rowing community, has its own unique features, is highly competitive, book ended by a lot of fun, and has its own special set of awards, prizes that are all donated by the rowers.

"It's really special," said Cass Cunningham, who has won the women's masters division for the last seven years in a row. "First of all, everyone just randomly shows up. And every year, you have this really competitive group that says, oh, no, no, no, I'm just kind of going to go through it for fun," she said.

"And then the athletes that want to race it get going, and it all just kicks in."

For those not familiar with the run, there are a few quirks that need to be understood. One, it is really just for rowers - Philly rowers who are members of one of the boat clubs that make up the Schuylkill Navy. Guests are allowed to run, but that list is not very long.

Second, the course is pretty much a mystery. It's not marked, not really supervised, and there are more than a few people who have gotten lost one time or another. In other words, the Philadelphia rowing community wants to keep the race to themselves. 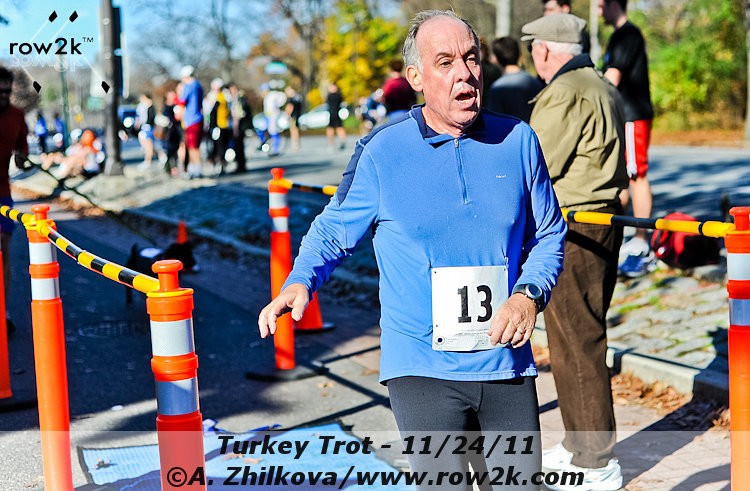 Clete Graham has been race director for the last 20 years. He will run for the 30th time this year.

"I would not dispute either of those things," said Clete Graham, who has been the official race director for the last 20 years, and is running for the 30th consecutive year Thursday.

"Strictly, by the rules, it's only open to members of Schuylkill Navy clubs. But we do allow guests to run," he said.

However, when pressed on the subject of keeping the race to the Philly rowing community, Graham said he once dissuaded a writer from doing a story. "I got a call from Runner's World Magazine about ten years ago. They wanted to do a story on it," Graham said. "I told him I really don't want a story on it. We like to keep it under the radar. It's for rowers only."

Runner's World did do a story in 2011, but it centered on Malta's Fred Duling participating in the run for the 52nd consecutive time, less than a year after suffering a fall and becoming paralyzed. (He will be on the line for the 60th year Thursday.)

As far as marking the course, that's really a matter of logistics, Graham said. "We don’t have enough people to go out the night before, or the morning of, to mark the course. The guys up front know the course. You just follow them. Then if you want, you can break away in the last mile."

And so it goes every year, and will again Thursday morning.

To be fair, the course is really not a secret. There is a map available on the website, and if a newcomer really wanted to know how to run it, they would find help. That does not mean it is easy to follow, or to run.

The route begins on Boathouse Row, goes along Kelly Drive to Brewery Hill, up and over the Girard Avenue Bridge, turns onto Lansdowne Avenue, and at the Sweetbriar Cutoff, the course becomes more or less a cross country run. From here it is best to turn to the official Schuylkill Navy description of the course.

"Runners go to Meade Monument, then follow the cyclone fence to the Pagoda entrance gate, cross thru the service entrance to Belmont Plateau, up the hill to Belmont Mansion, and return by way of Brewery Hill, down Kelly Drive to Malta." 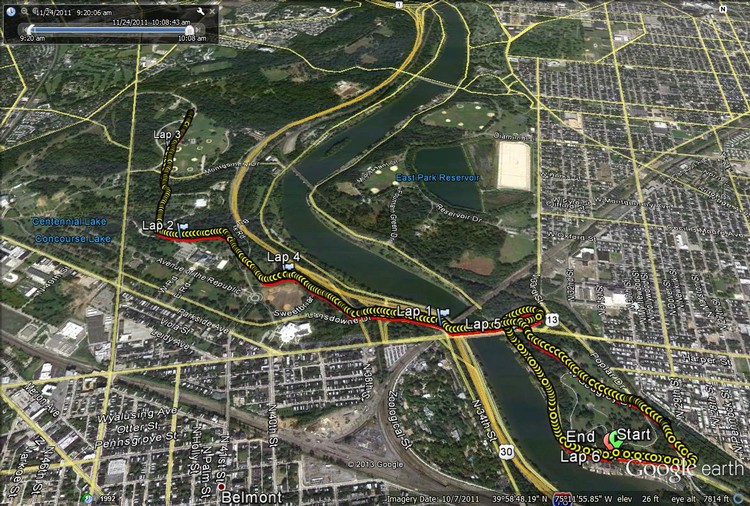 With that said, it is worth noting that not everything will be easy to figure out, even with posted directions. US men's national team head coach Mike Teti won the men's open division nine times, including a stretch of consecutive wins from 1984 to 1987.

So, Teti qualifies as one of "the guys up front" that know the course. But during one of those races, he got to the cyclone fence and followed it to the Pagoda gate, only to find it locked.

"It is pretty much the same course every year, but when you go up Belmont Hill, you would go around the Mansion, and go behind Memorial Hall where there was this fence. I remember one year I was running, and I was sort of way out in the lead, and the fence gate was locked," he said.

"So, I went around. And as I am going around, when I'm halfway around, I see them open the gate and everyone else goes through it. Basically, I went from first to midway through the field at that point. By the time I came down the hill, I got back in the lead. But when I got to the fence I had a panic attack. I got there and the gate wasn't open. So, that was fun.

"Really though, it's awesome and it's fun," Teti said. "I enjoyed running in it. Every year you get there early and warm up, and you see everybody. It was super fun. I miss it actually."

While it has been a few years since Teti moved to the west coast and has been in Philly to run the race, not much has changed. It is still a big deal, and for the most part, the same people do run it.

Just check out the past winners list and look at the names, many of whom are recorded multiple times. The current record holder for both total wins and consecutive wins belongs to Shane Madden, who has 13 total victories, 11 that he strung together between 2002 and 2012.

Women began entering the run in 1971, and the holder of the most wins in the women's open division, belongs to Ann Tierney, who has won eight times. Tierney's daughter Elaine notched her name on the winner's list for the first-time last year.

Cunningham, who holds the record for consecutive wins in the women's masters division, said her streak will end this year, because she will be out of town visiting family in Michigan. But, she fully intends on running it again, even if it isn’t easy.

"It's hard," she said. "It is literately uphill all the way out to the turnaround, and then it's downhill on the way back, with maybe just a little bit of incline.

"I had my trail shoes last year, and I was happy about that because there was a little bit of a slush. You just don't know what you are going to get on race day."

One of the most unique aspects of the race that anyone who has participated will point to, are the rower donated prizes, many of which are handmade. "I look around my kitchen, and I have seven years of some pretty cool things, like drinking glasses, and cutting boards that remind me of the race," Cunningham said.

"You're running not just to get some kind of medal, you're running because you get to pick a really cool prize. And then drink beer at 10 o'clock in the morning. It's special." 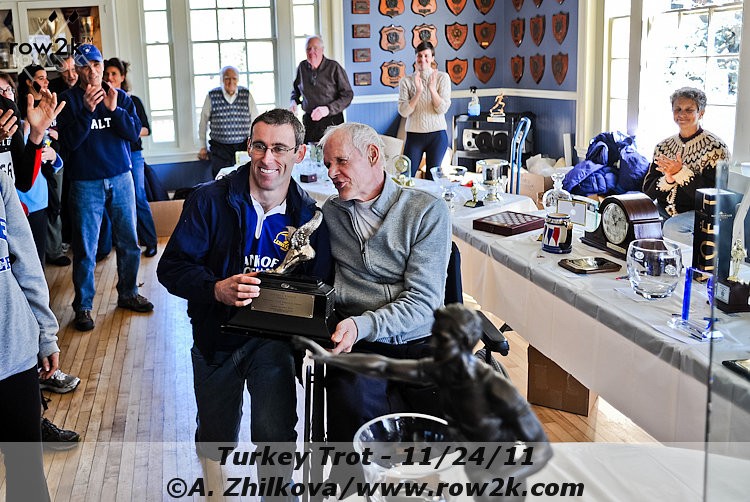