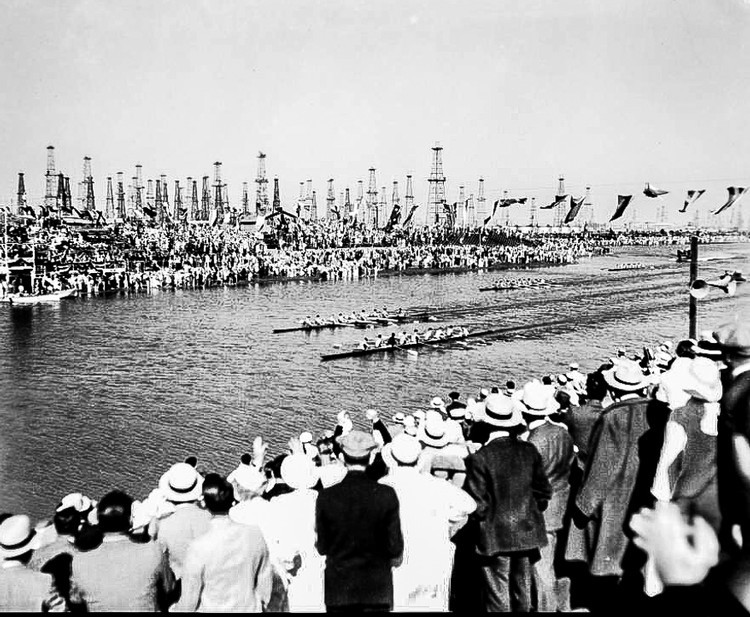 The walls inside the Peter Archer Rowing Center are covered with photographs, plaques, and event posters that trace Long Beach Rowing Association's long and distinguished place in the history of US Olympic rowing.

Most of the oldest photos are black and white, and show a 2000-meter racecourse originally dredged out of the tideland mud of Alamitos Bay by a group of local businessmen called the Channel Club. According to the history of the rowing association, the purpose of the dredging was the creation of a recreational boating lagoon.

While it might have been dug with recreational boating in mind, the location was discovered by the organizers of the 1932 Olympics, determined to be the ideal location for the rowing events of the Xth Olympic Games, and was developed and named Marine Stadium.

The backdrop to the photographs is of crews racing in front a grandstand reported to have held 120,000 fans packed into stands built in front of a massive field of oil rigs and power lines. 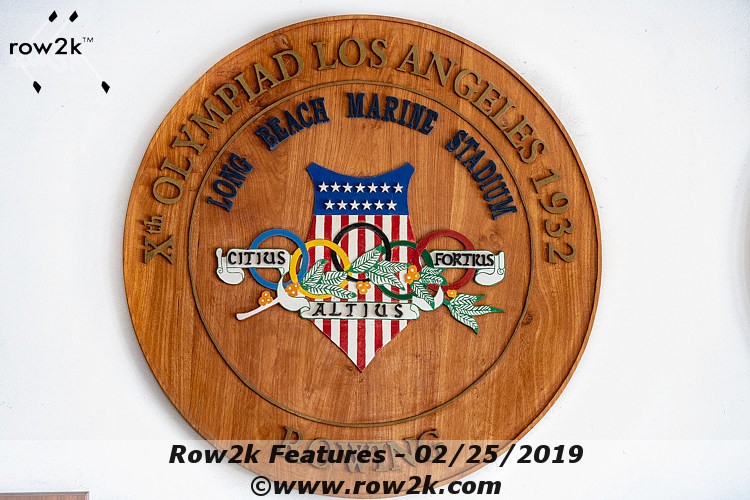 Today, the venue is unrecognizable from the scenes of the 1932 Olympic event. The oil rigs are gone, replaced over time by single-family homes and a neighborhood that butts up against the road leading to the Long Beach boathouse.

The rowing channel remains the exclusive practice venue for the shells that launch from the rowing center - but only between 5 and 8 AM. After that, speed boats pulling water skiers have complete control.

There is still a race course in Marine Stadium, and the venue is an official California Historic Landmark, but a bridge now spans the waterway on what was in 1932 part of the first 500-meteres of the 2000 meter course. Boat piers jut out into the waterway above the bridge, and the length of the race course has been shortened by development to 1500 meters.

The loss of the full 2000-meter course to marina development and construction of the bridge may never have been questioned again - except for a decision by FISA made during their February meetings to study using Marine Stadium again as the rowing venue for the 2028 Olympics.

According to a release from World Rowing detailing multiple decisions made during the February FISA Council Meeting, FISA was asked by LA2028 to consider an alternative proposal to its original intended venue development on Lake Perris, a reservoir 80-miles east of Los Angeles.

The FISA report notes that the original LA bid proposal for Lake Perris would require a satellite Olympic Village because of its distance from the main athlete housing in Los Angeles, and to avoid those costs, and host the rowing events closer to the center of the Games, LA2028 proposed that the existing Marine Stadium venue be considered as an alternative.

The proposal puts FISA in the position of having to decide to row a shorter course in exchange for a less expensive alternative in a location in the heart of the Olympic action around Los Angeles.

Long Beach is already planning to host several Olympic venues and to develop facilities for handball, water polo, and BMX. In addition, marathon swimming, triathlon events, and sailing will take place along the Long Beach waterfront and Belmont Pier.

FISA president Jean-Christophe Rolland was in Long Beach for the recent World Rowing Indoor Championships, and talked to row2k about the news that FISA was considering the LA2028 Long Beach venue proposal. Rolland said that FISA was concerned about making a change in distance, but said it might be necessary, and that it must be at least considered as a matter of cost, location, and fan exposure. 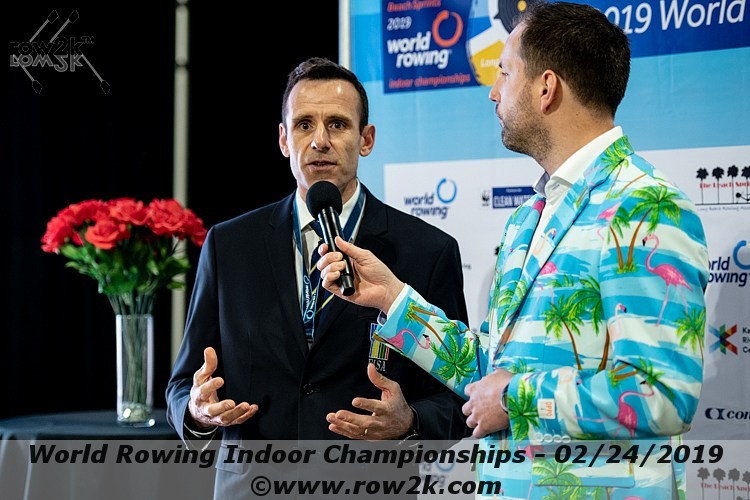 "Of course we are concerned, because in rowing one of the fundamentals of our sport is that the effort should be at least a minimum of five to six minutes," he said. "So obviously, we don't like to shorten the distance; it's a different type of effort.

"We will not need a sub-village for the athletes, the athletes will be able to stay at the Olympic Village," Rolland said. "So we have to consider all these aspects, but obviously the sport's elements are critical and we will be very, very careful to look at it at this point."

Rolland also said that any fear that by making the change for 2028 would leave FISA open to more permanent changes in distant or format is unfounded.

"We're not making any steps (to future distance changes)," he said. "To be honest, we know the fundamentals of our sport and we know the specificity of the effort has to be a minimum of five minutes.

"But we also have to consider this very specific element and proposal from LA28," he said. "It doesn't mean we will change our rules, but for this specific Olympic regatta, we might have to make this bit of change."

When FISA released the details of the decisions made during its February meeting, the reaction from the rowing community on social media was immediate.

Postings on a Facebook thread ranged from cries that it will unduly change the sport, concerns that the venue cannot be made fair because of tidal influences, and comments that changes within the sport are necessary to make rowing more popular for mainstream Olympic fans and television audiences.

But most hard-core rowing fans don't want to see the distance changed. Rowing has been part of the Olympics since the beginning of the modern Olympic history.

Even Long Beach Rowing Association president Rob Glidden, someone who would personally like to see the Olympic venue back in Marine Stadium just four years shy of the 100th anniversary of the '32 Games, does not like the idea of shortening the official 2k distance.

"I don't have any involvement in this, but for my own sake, I would lament the loss of the two-kilometer course, it's so traditional," he said. "I think going to a shorter course puts it in the way our junior's races, which is 1500 meters." 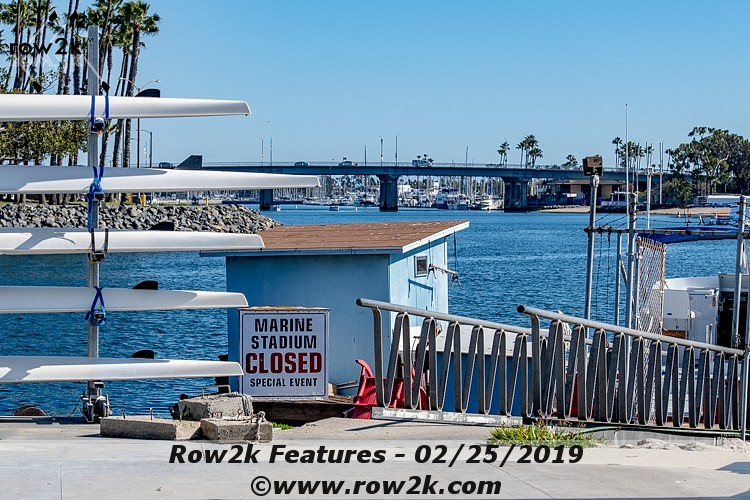 As it currently exists, 1500-meters is about the length of the full course. The bridge that was built on E 2nd Street to connect South Long Beach to Naples Island was constructed across the 500-meters of the original course. Marina and pier development above the bridge also juts in places onto the original course, and construction of the base of the bridge narrowed the width of the 2k, 1932 course.

Two-thousand meter races are still held on the course, Glidden said, but they are limited to two or three lane races only. In addition to the inlet's use as a recreational marina, the rowing on the course is limited. Between 5 and 8 AM, the waterway is exclusively used for rowing. Between 8 and 5 PM, the course is used by water skiers and power boats.

As the area was developed, Long Beach rowers were forced to accept that the waterway needs to be shared between multiple users.

"When the Marina was rebuilt, there was a massive encroachment on the waterway which we, with other users, took issue with because it was denying public access for some for the convenience of others. It wasn't as balanced a use as what we ultimately ended up with," Glidden.

"So, you have many competing interests for water as a recreational resource and we have to share with everybody else. So it's not about what suits the rowing community, especially if it's for an elite Olympic event that's rather rare." 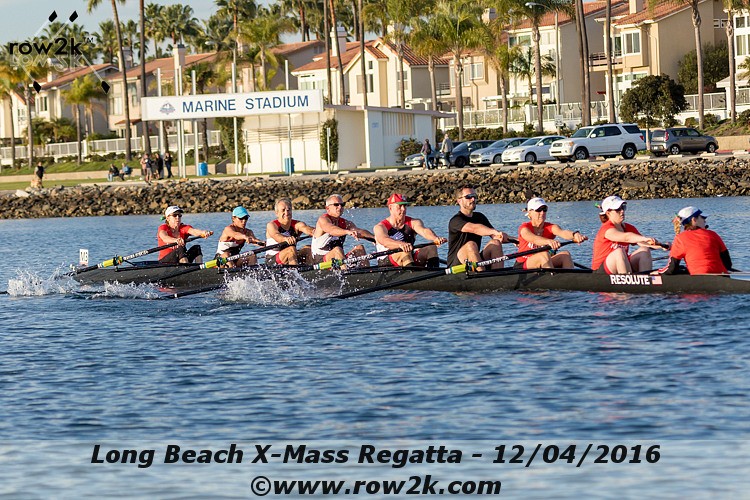 Among the details that FISA would have to consider in addition to a shorter distance would be running races on a course that is on a tidal waterway. Glidden said it should not pose a problem if the events are run when the tide was between cycles (slack tide) for neutral current racing. He also added that in terms or fairness, every crew in any specific race would experience the same tidal impact.

He said Long Beach hosts regattas on the waterway every rowing season without issue.

But one specific tidal influence that would have to be planned for would be water entering the course from the ocean through the inlet just below the bridge. That water flow creates a cross current that would impact all racing lanes at about the 1500 point.

Glidden agreed that it would not be inconceivable to build a tidal barrier on the portion of the course, and that the bridge could be removed for the Games and the pinch point created by its construction made wider.

Resistance to proposals for new construction on the course could most likely be expected by the other users of the waterway, but also from the neighborhood that lines the course, particularly on the boathouse side.

Many of the homes developed there currently have a water view, and it is not uncommon for a trailer loaded with boats left parked on the street near the boathouse to draw complaints. Although, Glidden said, the association gets along well in the neighborhood most the time.

At the moment, FISA's consideration of the LA2028 proposal to use the Long Beach Marine Stadium venue are only at the stage where studies about affordability, fairness and the impact - or benefits - to the sport are just beginning to be looked at.

No decisions are close to being made, but the idea that the community could add rowing to the list of proposed venues was received favorably by Long Beach Mayor Robert Garcia, who was quoted in the Long Beach Post saying Long Beach welcomes the idea.

“We've been very open since day one that we welcome as many events in Long Beach as possible,” Garcia told the Post. “We obviously are really pleased with our partnership and with our current events that we have. We would love to have rowing in the city. Its part of our history, it's part of Long Beach.

“But we know at the end of the day that's a decision that will be made by the rowing federation and the Olympics. We'll support any decision they make and it's important to us to get the community involved. We know it would be a very exciting event.”

As for Glidden, and the Long Beach Rowing Association, adding another Olympic legacy to Marine Stadium would be welcome, especially if the traditional length of two-thousand meters racing is preserved.

"We would love to host the Olympics here," Glidden said. "Nothing would make us happier to see it used again. And it would be almost the 100th anniversary of it. It would be 96 years since it was previously used for an Olympic event. That would be very thrilling for everyone down here." 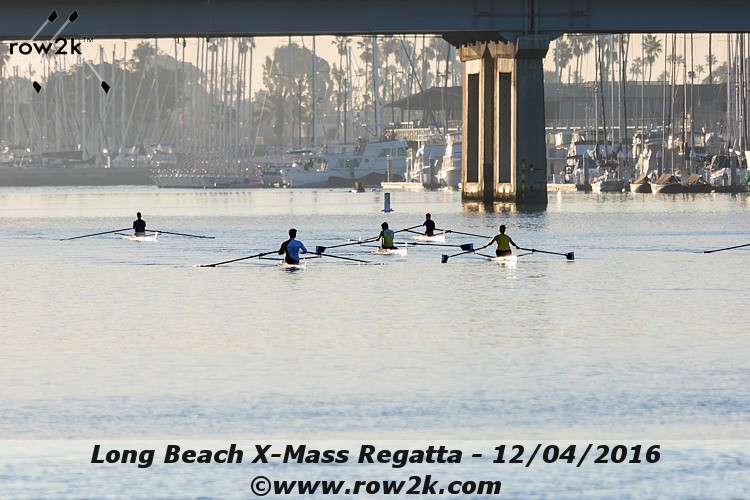 Singles lining up for racing below the bridge 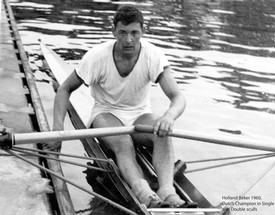 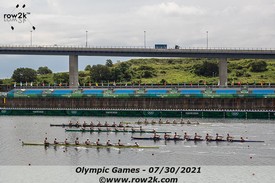 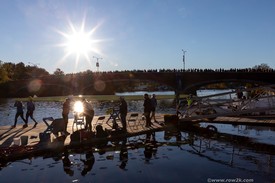