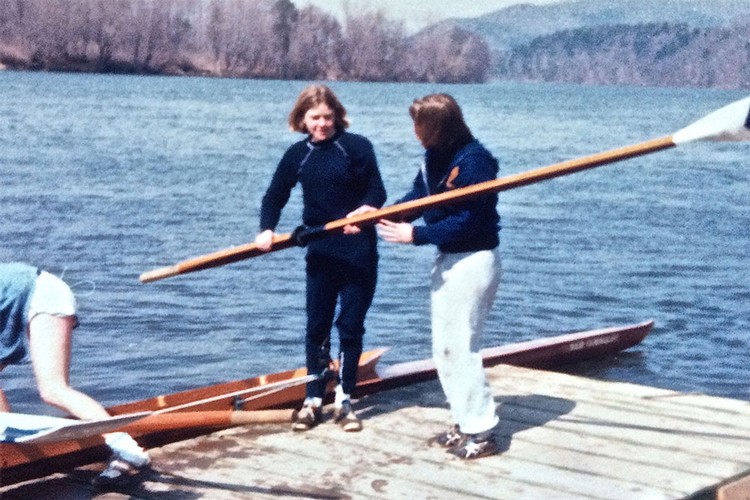 AS I'VE ALREADY MENTIONED, I had a sister named Shawn who was also rowing on the Connecticut River, some fifty miles upstream of Hartford, at Mount Holyoke College in South Hadley, MA. The same body of water and the same sport connected us, and it was because of her that I had first picked up an oar and gravitated toward rowing. Of course, it wasn't the only time my older sibling had dragged me into an activity that I never would have otherwise encountered on my own.

When we were younger, I was more inclined to lie about listening to Beatles songs and learning to play them on my guitar; Shawn was always in motion. A consummate tomboy, she could not stomach my artistic bent, which generally led me into more solitary pursuits - most of which did not involve her. Athletes, of course, require playmates. And having witnessed my early demise at the hands of various bullies in our neighborhood, she took it upon herself to toughen me up by engaging me in all manner of athletic endeavors, designed to cultivate my manliness and, of course, to keep her company.

This plan not only meant pick-up games of football, baseball, and basketball, but also spontaneous and less structured methods of combat. Often, while I was innocently reading a superhero comic book, she would pounce on me like a crazed psychopath come to life from the pages of my favorite reading material, delivering a volley of punches and karate chops. If these weren't sufficient to rouse me from my indolence, she would then execute some sort of elaborate wrestling move that she'd witnessed on TV.

So in a weird sort of way, I wasn't too taken aback by my recent arm-wrestling loss to the "Persian Princess," as Kooshe had become known, because I'd grown up being constantly challenged by Shawn to just these sorts of tests. I'd learned to become more circumspect about what women could or couldn't do, the upshot being that I didn't really respect any girl who wasn't sporty to some degree. Still, it didn't mean that I wasn't disappointed by Kooshe's rejection of me in favor of the rowing team.

I tried to put the entire arm-wrestling episode behind me, but the next day at dinner the embarrassing tale was volleyed about from table to table like a piece of rotten fruit. Eventually it landed back in my lap, where I had to sit and listen to my own teammates discuss my defeat with great relish, eventually launching into various theories about the unpredictable nature of the opposite sex. Naturally, most of the guys did not yet have girlfriends, so these discussions took a largely speculative turn in lieu of actual field experience.

While most of them concluded that I had failed miserably on all fronts, our newly elected captain, Richard Malabre (alias "Dak"), had a different take.

"Women make you docile," he said, in a deep, matter-of-fact voice.

This sober judgment silenced all conversation at our table, as if it struck a chord deep within our young male psyches.

But only for a nanosecond.

I remained largely silent throughout these deliberations, and fortunately the conversation began to shift away from me and into more productive fields of gossip.

"Did anyone get the skinny on Cynda Davis?" Wean asked.

I shook my head, as did everyone else.

Rumors had been circulating about a one-night tryst between Davis and an unnamed varsity male oarsman. No details had emerged, but I'd witnessed how Mongo had suspiciously fled from the frat party upon her arrival. Then again, another varsity oarsman named Edward Noman had recently confessed to blacking out in a drunken stupor and then waking up beside one of the varsity woman on a sofa at A.D. Totally embarrassed, he had quickly grabbed his clothes and skulked away. As freshmen, we were only privy to bits and pieces of tawdry gossip like this, since most of the varsity oarsmen didn't want to reveal anything too incriminating - material that might come back to haunt them at "skit night," held during the upcoming spring break in March.

Now that we were off the water, in fact, I'd begun to discover that there was quite a bit of intersquad dating among oarsmen (and women), some of which worked out well and some not. Our own coach, Charlie Poole, had ended up marrying his former coxswain, a not uncommon occurrence in the crew world. For whatever reason, though, I had no interest in this sort of thing, which seemed too close to home. Perhaps, too, it explained why I had reacted with reservations when Kooshe revealed her desire to join the team - not because of any moral high ground, but because I suspected that things could get messy.

What I didn't realize about the women's team, however, was that this year was to be something of a landmark in their short history.

Only a few years prior, the inaugural Trinity women's crews had been regarded as a potential distraction for the men's team. As such, they were required to practice only in the early morning and only during the fall season. By the time I arrived, however, things had changed. Head coach Norm Graf had realized their true potential as dedicated athletes who might make a significant contribution to the team. The squads were now intermingled, and this year's group would be the first to row through the spring and compete at the National Championships in Philadelphia. If the men and the women both did well, Trinity would have a shot at the combined points trophy awarded to the college with the most top finishers.

That night, I decided to go run stairs in order to clear my head. Stair climbing is a desolate endeavor, but I'd discovered that the simple act of counting steps, flights, and the number of ascents could provide an immediate sense of accomplishment. At Trinity, we had access to the eight-story concrete fire exit steps at the High Rise dorm, which lacked the benefits of clean, fresh air. The dryness quickly made your lungs and legs burn, and then there was the practical problem of having no place to spit, which meant that many of us let loose wherever it was convenient, much to the dismay of the building residents.

While I was running up and down, lost in thought, I suddenly heard the bottom door slam, and then the unmistakable sound of another athlete beginning to ascend the stairs behind me. I immediately picked up my pace and braced myself for battle. Mike Bradshaw often trained at the same time as me and there was no way I was going to let him pass. But as I descended, I came face to face with a young woman I hadn't noticed before. She had a vaguely familiar, Scandinavian look and an unusually composed demeanor considering the activity we were engaged in. As we passed one another she said "hi," in a deep, resonant voice that reminded me of an actress or a jazz singer from the 1950s.

We continued up and down the flights, crossing paths midway several more times, smiling and encouraging each other. As it turned out, she lived in the same dorm as me, so after we finished we walked back to the quad together in the dark and chatted about the challenge of freshman crew. Like me, she was relatively new to the sport and wasn't sure how she would do because she wasn't that big.

She had an easy way about her that was not typical of Trinity, or of New England in general, and I was not surprised to learn she was from Wisconsin. As we parted ways it finally struck me why she seemed so familiar: With her short brown hair and winsome smile, she reminded me of my sister.

Her name was Heidi Wittwer, and she was to play a role on our freshman lightweight team that no one could have predicted. 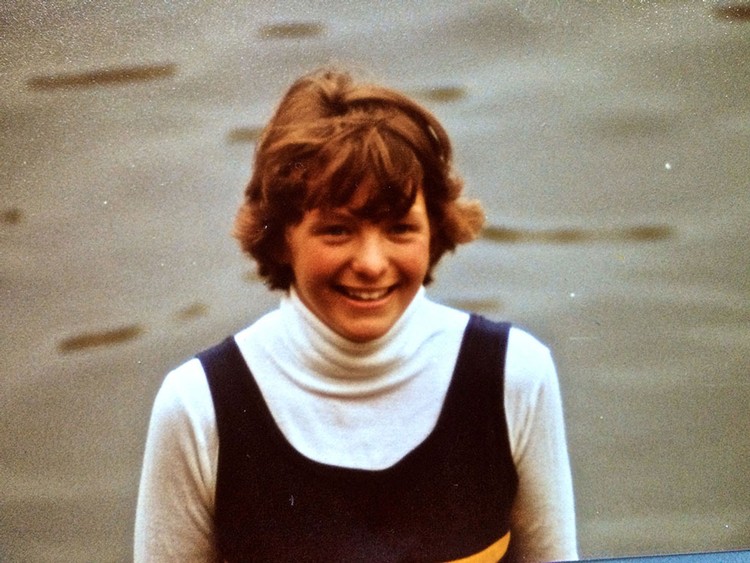