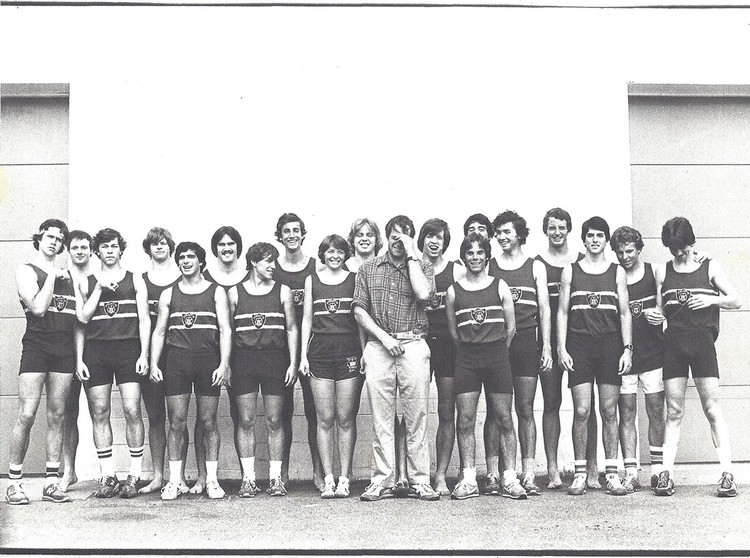 Ah, fall rowing and the innocent joys of novice crew - the long, technical rows in pairs, fours, and sixes; the leisurely pace that allows you to learn and refine your strokes; the ample downtime to glance about at the changing foliage and appreciate the unique and timeless wonder of being out on a river, far away from the cares of the world and the trivialities of campus life.

Nowadays, much of this innocence has been lost, as the majority of U.S. collegiate oarsmen and women are recruited and then quickly mainstreamed into varsity boats. But in the 1970's, even at big institutions like Harvard and Yale, crew was primarily something that you learned during your freshman year. Sequestered among a like-minded group of first-year classmates, you were shielded from the grim rigors that lay ahead. This permitted you to enjoy the slower, simple process of learning the sport without the urgency of producing an erg score.

To me, there was something about being out on the water that always seemed to put things in proper perspective.

Aside from a few guys who had been fortunate enough to row in prep school, the rest of us showed up at the Bliss Boathouse in a state of curious bewilderment, taking in the details of our new surroundings with hopeful, observant eyes.

Most of us were dressed in baggy sweatpants and t-shirts, having not yet earned the right to wear a Trinity crew jacket. Standing off to the side, we respectfully watched the upperclassmen lift, shoulder, and launch their boats and listened carefully to Coach Poole's instructions to avoid messing up when it was our turn.

I was anxious, of course, but among this new group of novices, my slate was clean and I had the chance to remake myself. Much to my surprise, no one had a superior attitude around the boathouse, due mainly to Norm Graf, the head coach and patriarch of Trinity Crew, who had instituted rules of protocol that inculcated respect and camaraderie among all of the programs, women and men alike. Rumor had it that he came from a military background, and he did not tolerate disrespect.

As freshmen, we didn't have much exposure to Graf at first, but we felt his presence nonetheless - the hawk-like stare that quickly took in the swirl of activity around him; the raspy, bellowing voice that echoed out on the river and within the boathouse bays. Back then, even at age 52, Coach Graf was like some sort of mythical icon, and someone you learned to revere and fear in equal measure.

The Bliss Boathouse was a simple concrete brick structure set in the outback of East Hartford, far enough away that most people drove their own cars to get there. A few brave souls ran to practice, but the route was riddled with bad roads and sketchy neighborhoods.

Below the boathouse, down a steep paved grade, lay the ancient, ever-moving waters of the Connecticut River, the longest waterway in New England.

"I wonder what that's supposed to mean," said a guy standing next to me. He pointed to a small, official-looking sign perched in one of the boathouse windows:

Coach Graf, who had created the sign to ward off local vandals, apparently had a sly sense of humor. Seeing us looking at the sign, he suddenly veered toward us.

"What are you freshmen looking at?" he barked, with a twinkle in his eye and a barely concealed grin. "Get busy and take down your oars!"

Charlie Poole laughed and ushered us into the bays. He knew all about Graf's sense of humor. But as he looked over the roster and briefly did a role call, a puzzled look came over Poole's face. For it turned out on that first day that there were 19 of us but only 18 seats.

"Hmmm. Dan, why don't you take the single?" he suggested.

Shit, I thought. I'd been dreading this moment.

All eyes fell upon me as I carefully lifted the wooden shell off the rack and strode down the aluminum dock with it balanced on my shoulder. Not many people on the team knew how to scull, and they were impressed that I could even carry the boat.

Fortunately, after I shoved off from the dock, a strong current quickly pulled me downstream and well out of sight. I took a few cursory strokes to avoid hitting the shore, then started off with some drills to see how the boat would respond.

As I slowly lengthened out to full reach, part of me began to fear that I'd catch a crab and get pitched into the swift waters of the Connecticut. That would quickly end my rowing career at Trinity, and it would be dangerous, too. This wasn't Roger's Lake.

I simply couldn't let that happen, so in lieu of a coach, I started swearing at myself. I must have looked like a raving lunatic, but my sculling quickly became smoother and smoother as I drove my rowing demons away with every cursed stroke I took.

The boat itself was sinless, and for that I was grateful. I'd always been denied the beautiful wooden shells at Blood Street, which were reserved for the more experienced scullers. The crappy old fiberglass trainers, ill-rigged and uncared for, had done my nascent sculling no favors. However, this boat was set up perfectly, and it responded dutifully even under my tentative hands.

Soon I was zipping along, making decent speed. I went by one of the varsity eights, which had briefly "wayed enough" for a rest.

"Hey, who's that kid rowing the single?" I heard one of them say.

"Some frosh," another responded, disinterested.

"Not bad," came another.

"WELL, YOU KNOW WHAT I THINK ABOUT SCULLING?" said Mongo, the giant upperclassman who I'd met at the recruiting table.

He promptly issued a giant fart, which reverberated loudly in the open fiberglass hull of the boat.

Everyone laughed, including me, and I nearly lost my balance for a moment. Undaunted, I made it back to the dock, dry and happy, and safely put the single back into its berth without a scratch.

"Nice job out there," Coach Poole said. "Even the varsity heavyweights were impressed."

"You mean Jeff Jowurski?" he laughed. "Oh don't worry, you'll get used to him."

Yet Mongo had definitely made a point, albeit in his own crude way. While sculling could be cool in a balletic sort of way, sweep rowing was definitely more badass.

A sweep oar alone was a massive implement, and it made you feel macho just carrying one around. Lacrosse players be damned; their sticks were like flyswatters in comparison. And in the right hands, an eight-oared shell, nearly 60 feet in length, was like a water-born juggernaut, harkening back to the days of the Greek triremes.

At least, these were the musings of my first friend on the Trinity team, a nerdy upperclassman named William Woodridge. He explained all of this to me (and much more) at dinner that evening:

"Even Archimedes, the designer of one of the largest of those ancient vessels, would have been proud of the modern rowing shell and the huge levers used to propel it. And let's not forget Teddy Roosevelt, whose 5th cousin Franklin rowed at Harvard. He clearly must have been thinking of the sport when he appropriated the African expression: Speak softly, carry a big stick, and you will go far."

Woodridge was an odd fellow, erudite to a fault. He had a habit of blinking constantly, which lent him the unfortunate aspect of a mole that had recently surfaced from underground. Every time he blinked it seemed another thought occurred to him that he simply had to share.

On the topic of sculling versus sweeps, he had this to say: "Sculling can be taken for leisure or sport, but rowing in eights is a serious business. And that business is to win races."

Still, despite all of his historical hoopla, I found the transition to sweeps challenging.

First off, the asymmetry and contortionism of the sweeping motion felt inherently wrong, after having started with two oars in my hands. And then, despite the promise of rowing on a team, coach Poole quickly divided us into opposite camps—ports and starboards. How could that create anything but dissension? After all, each pair of oarsman turned away from each other at the beginning of each stroke, yet were expected to follow each other. It reminded me of a sack race, where each pair had to put an opposite leg into a burlap bag and learn to run together.

It is difficult to remember the first strokes one takes with any sort of clarity. They are like the first clumsy steps of a toddler, forgotten in the effort to merely stay upright. Because of my size, I was placed in the two seat, where balance and visual focus were a constant battle. I found it no simple task to look at one guy's back for swing timing, and another guy's oar for a proper catch.

You get the picture. A novice crew is not a pretty sight, so let's not dwell on it. None of us did; we were all simply having fun messing about in boats and enjoying the novelty of it all. In those days, freshman fall crew was not a particularly serious endeavor, but merely a testing ground to see who could tolerate the odd challenges of the sport.

Even so, after a few practices, we began to hear whispers that some of us would be chosen to row in a prestigious three-mile race in Boston coming up in mid-October. And as William Woodridge had implied, it was the incentive of being chosen for one of these competitive eights that kept us going as the days grew shorter the temperature dropped, and the less hardy souls were left behind.

The name of the race, Woodridge informed me, was the Head Of The Charles Regatta.