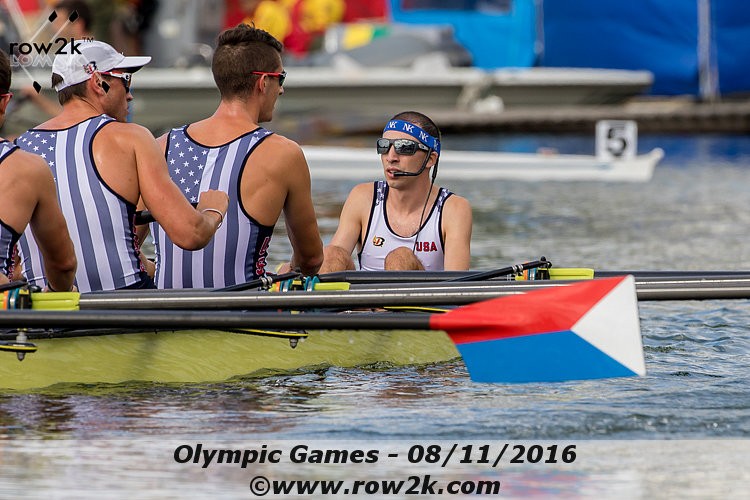 But coach, there are eight of them, and they're all bigger 'n me.
Every season, in boathouses around the world, a similar scene repeats itself. Coxswains, especially beginning coxswains, are told some variation of, "Steer straight, and be sure to establish your authority."

But coach, there are eight of them, and they're all bigger 'n me.

Fortunately, the task is not as daunting as it seems, and requires no acts of despotism on the coxswain's part. Authority comes from knowledge and commitment to the crew, and knowledge comes from practice. Respect breeds respect, and coxswains who respect their rowers get respected in turn.

What if I'm just starting out and haven't got any knowledge yet?

Even if you are brand new to the sport and are coming with a blank slate, what rowers and coaches respect is how fast a coxswain learns and how serious he or she is about getting better. If you are new, don't pretend to know things you don't (rowers in the engine room inhabit the hard edge of reality and will see right through that.) However, if they see you learning and committed, getting better with every practice, they will want you aboard, even if you make mistakes in the beginning (as long as you don't make bridge pizza out of your bowman). The key is not to make the same mistake twice, and to learn from the ones you do make.

Ask lots of questions. Some coxswains are reluctant to do this lest they call attention to what they don't know. (Fortunately, the reluctance seems to be gradually easing.) It's a sign of alertness and interest that you're asking. Much better to ask, than to keep silent and make a mistake.

There are benefits to both. In a novice boat, you're all at the same level and learning together from the ground up. As the coach instructs the rowers, you have a chance to learn the fundamentals of rowing. On the other hand, learning from experienced rowers what they want in a coxswain accelerates your learning curve. While they might be less patient with your mistakes, they will shape you. If you work with them, you will get better very fast.

The process works in reverse too. An experienced coxswain taking out a novice boat from time to time is an excellent way to sharpen your coxing skills. It forces you to rethink things, and become a more 'conscious' coxswain. I highly recommend coxswains doing this occasionally -- it allows them to share their skills with novice boats in the program, as well as to sharpen their own.

I seem to be repeating myself and my calls lack variety.

They will, at first. As you learn more about the changes your rowers make in response to the coach's instructions, you will gain a feel for what to say to produce certain results. The more tuned in to your boat you are, the more variation and subtleties you will pick up. You will absorb the terms more quickly if you spend time talking with your rowers. Make sure your calls have meaning, and don't say something just because you heard another coxswain say it (don't be afraid to ask a coach or coxswain on shore, "What did you mean by that?")

Keeping a coxswain journal is a good way to measure progress and accelerate your learning curve.

Want an easy way to fill up your callbook fast? Listen to the things rowers shout to encourage each other. (Plagiarism is encouraged here.) The best calls come directly from the engine room. During an erg test or bench pulls, when that ring of rowers forms to cheer their teammates on to insane heights, you'll hear what moves them from their own mouths. They'll write your script for you, if you let them.

Over the years, many rowers have commented that -- among the things they value most -- is having a coxswain who cares. Even rowers who don't like being coxed on the erg (and many don't) really appreciate having their coxswain there, noticing the splits, aware of the effort, and appreciative of PRs. A quiet word on the dock to tell a rower you noticed their improvement in practice, or the puddle they pulled, makes a huge difference. To a rower stepping out of a boat with burning muscles after a hard practice, the knowledge that someone noticed, somebody cared, can make it all worthwhile.

Remember, they want to work hard; they want the boat to work. If you want it right alongside them, they'll feel your on the same page.

You want your rowers to feel ten feet tall when they row for you. There are coxswains who have that knack for saying even the smallest thing, and you can practically see their rowers grow a foot taller on the spot. This is not about softsoaping them (they can spot that too), but about genuine respect and connection with them. If you genuinely respect them, they will respond to you on those occasions when you have to bear down on them too.

Rowers want a coxswain whom they think makes them fast. If you are constantly looking for opportunities to do that, there will come a moment when they see you on the dock and think to themselves, "that's the real deal."

Coxing a crewshell -- while it may seem autocratic when viewed from outside -- is actually a surprisingly democratic exercise, with the best decisions coming from shared input throughout the crew. Ultimately, a coxswain's authority comes from the rowers. Everyone on the boat has the same goal -- getting fast and winning races. 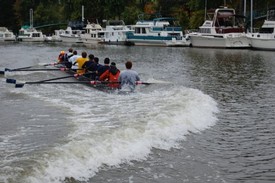 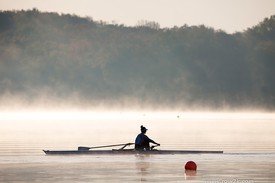 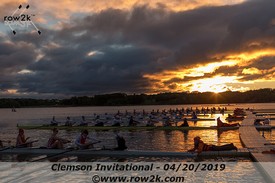 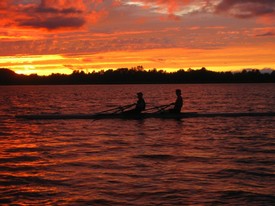