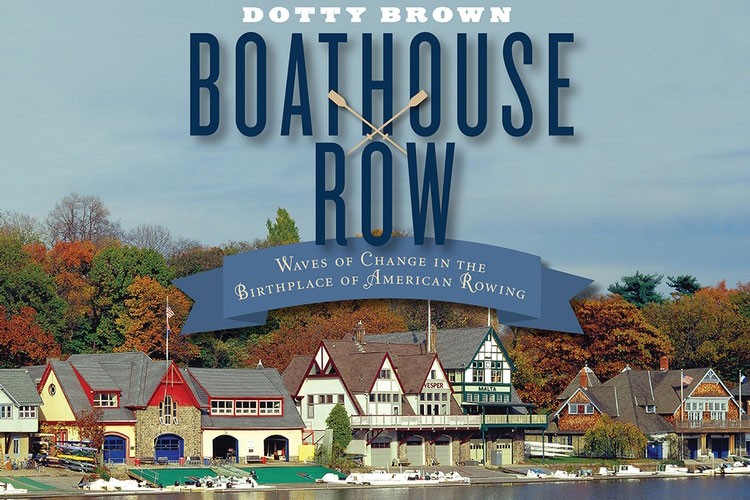 Dotty Brown didn't start rowing because she wanted to compete. She kept seeing her neighbor coming home from morning rows on the Schuylkill River in Philadelphia and was jealous of the look of satisfaction she had when she got out of her car.

"I would look out the window at eight in the morning and I would see her all glowing and sweating and I was jealous," Brown said After finally asking where the glow was coming from, Brown was introduced to rowing, took some lessons and joined the Vesper Boat Club.

She loved being on the river, "watching the ducks and egrets and turtles and being in a space in the middle of Philadelphia that sometimes felt like Vermont."

A career, award-winning journalist working at the Philadelphia Inquirer, Brown enjoyed her time on the river and out of the busy newsroom and learning about the lore of the river and the Boathouses. And when she left newspaper work, she was approached by Temple University Press about writing a book about Boathouse Row.

She wasn't interested. Brown loved the river and belonging to Vesper, but she wanted to pursue a book on what people did after retiring. She has a blog - UnRetiring - where she tells the stories of people leaving careers and finding the "next great thing. That's the book I was going to write."

But Brown didn't want to just turn down a publisher because "it's rare a publisher comes to you to write a book." So, she did some research, got into the archives and "I started making discoveries." What she was finding was that the history of Boathouse Row was more than a story of rowing champions and races.

That was certainly a big part of the fabric of history that is the Philadelphia rowing community. But the story behind them, their lives, the historical development and culture of the city had deep ties to Boathouse Row.

And that became the book she wrote.

Published in November, "Boathouse Row: Waves of Change in the Birthplace of American Rowing," is the product of Brown's love of the Schuylkill River and the history of Philadelphia and of telling stories.

It's a book that brings readers past the doors of the boathouses and the legends of rowers and coaches and delves deeply into the culture and development behind the iconic scene of the lighted structures that line the banks of the Schuylkill River and welcome travelers who visit the city by car and train and attract tourists by the thousands every year.

"I wasn't interested in doing a book about the many, many champions who passed through Boathouse Row, or the houses. I'm a story teller. I didn't know how I could make it interesting, but once I got into the archives I started making discoveries."

One of the first that grabbed her attention was a constitutional bylaw of Bachelors Barge Club dating back to 1853 mandating that members had to be bachelors to join and lost club voting rights if they got married.

"Once I started finding those kinds of stories, I kind of got sucked into it," Brown said.

Now available for purchase, the book's 245 pages and 160 photographs trace the origins of boat racing on the Schuylkill from when the river was dammed and made rowable, through the period when rowing was the most popular professional sport in the country - raced first by hardscrabble, blue collar oarsmen to the athletes who became famous Olympians, like John B. Kelly Sr. and his son John B. Kelly Jr.

"Jack," and "Kell" were more than just athletes and rowers, they were American history makers, bricklayers, and politicians alike. Brown's book weaves the story of the people together with the history of Boathouses, the famous architects that designed and built them, the artists that painted the pictures of the oarsmen and the overflowing crowds that came to watch them race.

She traces the stages of rowing's growth in Philadelphia and the drive by pioneering women to be included and accepted into the sport. The stories include painter Thomas Eakins, architect Frank Furness and Ernestine Bayer, who led the fight for inclusion for women.

"The trick of the project was to find a vehicle for telling the history in a way that would be interesting," Brown said. "I had to put a lot on the chopping block floor and I wanted a book that was not a book necessarily for rowers, but a book for anyone that was interested in Boathouse Row, of the City of Philadelphia or the changing demographics of the Row. That's why it ended up being called Waves of Change.

"I was very interested in pursuing the question of who are really the people of Boathouse Row? Who were they? Who are they today, and do they match the stereotypes that people have of Boathouse Row, which is that it is more elitist than it really is."

"Boathouse Row: Waves of Change in the Birthplace of American Rowing," is available in bookstores and online. For purchase information and events about the book and Brown go to http://boathouserowthebook.com/.