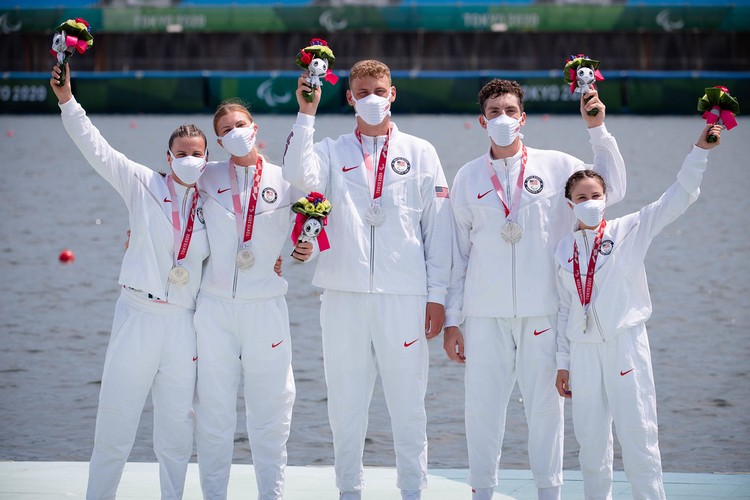 The GB para mixed four notched its 11th straight gold medal in the event going back to 2010, while the US posted its seventh consecutive silver medal in the event as 202One Paralympic came to a close on Sunday morning in Tokyo. The racing concluded two years of waiting, worrying, and obstinate training for international rowers worldwide as the '2020' rowing season finally came to a close.

Due to a rising cross headwind, the lanes were swapped before the A finals to put the heat-winning crews on the far side of the course, with GB in lane one and the US in lane two. The US four gave it a go off the line, leading the field for a time, with the US and GB followed closely by France. The British crew took the lead at around 500 gone and dug in from there, pushing out to an 11-second lead on the field. France held on solidly to third to take the bronze.

"It feels good," two-time Paralympic silver medalist Dani Hansen said. "It's an accomplishment to bring back a medal for the U.S. We're really pumped, we put a lot into this. The one thing you can do when you come here, despite the past, is put everything you can on the water and if you're capable of doing that you feel proud of yourself. I think all of us did that today and I'm really proud of us as a team. I think we did really well."

James Fox of the GB crew, the only member to have been in the gold medal crew in Rio five years ago, nodded to the history of the event for the GB.

"I'm just so happy to be part of this," he said. "We've got a rolling momentum now with the Paralympic four. This goes out to all our ancestors, the guys that have won since Karapiro in 2010, at London then Rio with my crew-mates there. Now we're carrying it on and hopefully long may it last."

The rivalry between the GB and US crews is bound to continue as well, no question. 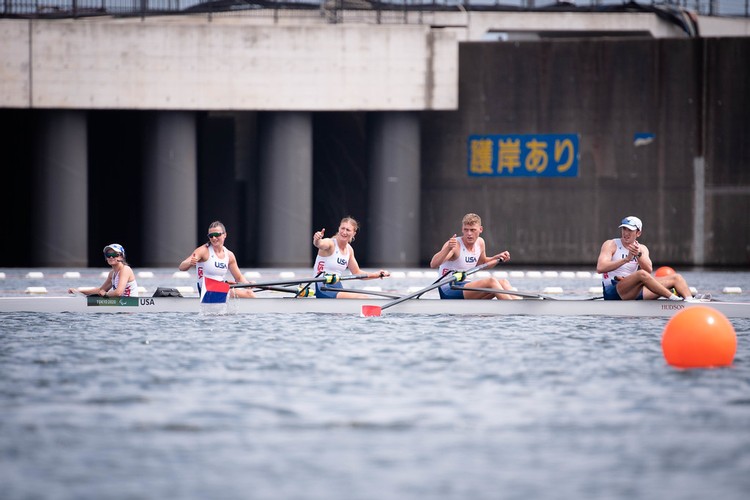 GB also defended their Rio title in the mixed double, rowing down a front-running Chinese crew with 500 to go.

"We knew that everyone was going to throw everything at the start," said Lauren Rowles, a double Paralympic champion at the age of 23. "As our coach said to us, it's not about who leads the first 1500m it was about who came through first. We just kept building in pace. To the 500, people were probably getting a bit nervous at home. Sorry! But we knew as we built through we were going to get stronger and stronger."

Her partner Lauren Whiteley added "We had absolute confidence and a lot of trust that it would come back to us down the track. It was a case of let them go. That can be a very difficult thing to do so big props to Lauren for just keeping the rhythm, keeping the boat where it needed to be."

The US crew of Laura Goodkind and Russell Gernaat fought in third position in the B final for a long time, ultimately placing fourth for 10th overall.

"We wanted to get a good start and unfortunately we didn't," Gernaat said. "Then we were like, alright, catch up mode. Then it became let's just stick with the pack and see if we can put something together at the end of the race. We would've liked to have done a move more in the middle of the course, but it was a great race. It was a lot of fun.

"It's a packed field, a lot of competition. Brazil and Australia beat us by 20 seconds [at the 2019 world championships], but not today, not yesterday. We've really closed that gap. So I feel good about our racing overall; we've come a long way and still looking for more improvement. I definitely want to go to France and see if we can put a bid in for a medal.

In the singles, both US scullers Blake Haxton and Hallie Smith placed fourth in the B final for 10th overall.

Like Gernaat above, many athletes are already looking toward the Paris 2024 Paralympics, which begin three years from yesterday, on August 28 2024.

"I'm bitterly disappointed really," admitted Pritchard, 29. "Hats off to everyone that medalled. The Spanish guy that came through me today, I put 15 seconds into him yesterday and today he just had another gear that I didn't have. With my disability I struggle to get lever in headwind. I had to trust that my way of rowing long and loose was going to pay off. I think I was gaining on them and just ran out of track. It's something for me to work on. We've got three years to Paris now and hopefully I'll be here again in my second Paralympic Games with this experience behind me and we'll see where we go."

Note that Blake Haxton's Paralympics continue next week in the canoe sprint events; Haxton is the only rower competing in multiple sports at this Paralympics.