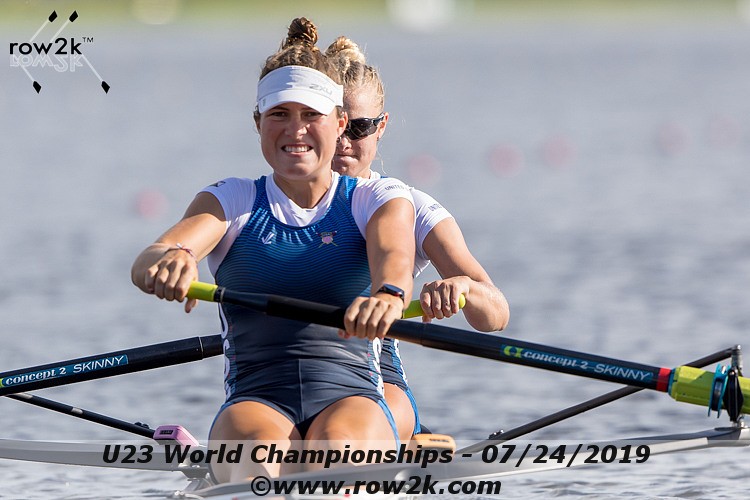 The World Rowing Under 23 Championships got underway today in Florida this morning to kick off the World Championships summer series for 2019; here are some links to what happened on the day:

row2k's Notes From the Course

USRowing Press Release
Team USA had five crews directly advance to their respective quarterfinals and semifinals, avoiding repechages, on the first day of racing at the 2019 World Rowing Under 23 Championships.

The women's pair of Hadley Irwin (Washington, D.C.) and Sarah Johanek (Cleveland, Ohio) was the first of the five crews to advance, qualifying for the semifinal round.

"I think we definitely got the job done, we came out to lay down a fast and solid first race, and I think that we did what we needed to do," said Irwin. "There's definitely a lot of tough competition out there but we're looking forward to continuing to race and getting faster every day."

The two are making their second national team appearances after competing at the championships in 2018, but that does not mean the experience is not as special as their first national team exposure.

The women's pair isn't the only crew that advanced. The women's four also won their heat and qualified directly for the A final this weekend. The crew of Teal Cohen (Dallas, Texas), Meredith (Hunter) Koenigsfeld (Cedar Rapids, Iowa), Kaitlyn Kynast (Ridgefield, Conn.), and Chase Shepley (Crystal Lake, Ill.) finished in a time of 6:32.15, just ahead of second place Great Britain, which finished in 6:32.96. 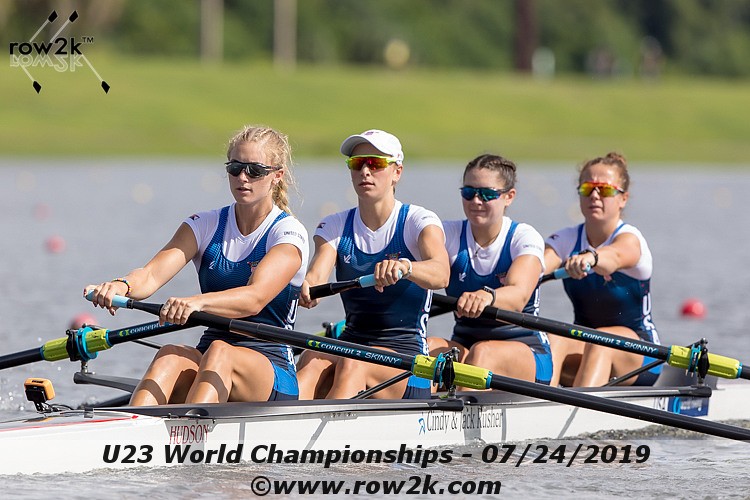 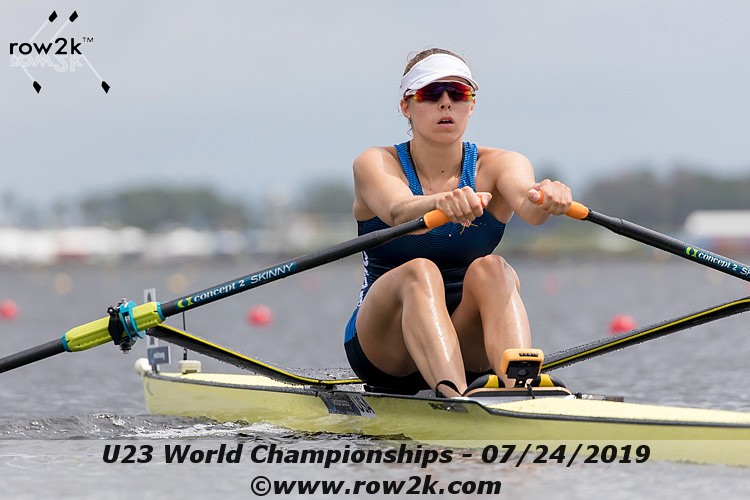 U.S. men's single sculler James Wright (Philadelphia, Pa.) finished third in his heat in 7:13.820, qualifying for the quarterfinals. Greece and Russia came in first and second in the heat with times of 6:59.51 and 7:04.78, respectively. 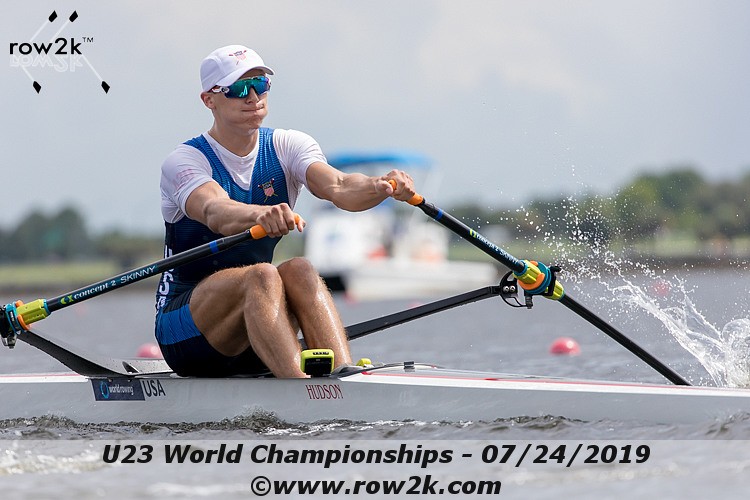 Seven U.S. crews have second chances to advance and will race in tomorrow's repechages.

The lightweight men's single, rowed by Sam Melvin (Costa Mesa, Calif.), finished in second place in 7:07.77. Melvin was beat out by Austria, which finished in 6:59.45, taking the only spot to directly advance.

The men's quadruple sculls of Thomas Johnson (Centreville, Va.), Samuel Gatsos (New York, N.Y.), Jack Reid(Deerfield, N.H.), and Nathan Phelps (Ridgefield, Conn.) will also be racing in the repechages after a fourth place finish today. They finished in 6:08.94, just missing out on the third qualifying position. Moldova won the heat in 5:56.75.

Also finishing fourth in their respective heat was the lightweight men's pair of Collin Hay (Shrewsbury, Mass.) and Matthew Marchiony (Weston, Mass.). The two clocked a 6:55.08 behind first-place Hungary's 6:36.65.

Mark Levinson (San Francisco, Calif.) and Daniel Perez (Fort Lauderdale, Fla.) finished in fifth place in the men's pair finished, crossing the line in 6:51.93. Winning that heat and advancing to the A final was Lithuania, which finished in 6:33.32.

Cole Dorsey (Rowayton, Conn.) and Mark Couwenhoven (Parkton, Md.) are both making their first international appearances. They attend George Washington University and the University of Maryland, Baltimore County, respectively. Last year in this event, Greece came in first place, followed by The Netherlands and Poland. The United States finished in 17th place. This year, there are 14 entries in the event.

Luke Smith (Tampa, Fla.) and Alexandar Damjanovic (Alexandria, Va.) return to the U23 National Team, this time in the lightweight men's double sculls. Last year, they raced together in the lightweight men's pair. Last year in this event, Spain came in first place, followed by Italy and Germany. The United States finished in 19th place. This year, there are 14 entries in the event.

The Iowa natives and Stanford University duo of Emily Delleman (Davenport, Iowa) and Elizabeth Sharis(Bettendorf, Iowa) look to keep their chemistry in tact as they return to the international stage. Delleman will see international action for the first time since 2017, as a member of the U23 team. She also was on the Junior National Team from 2014-2016. Sharis also last experienced international competition in 2017, finishing fourth in the double sculls with current senior team athlete Cicely Madden. Sharis was a member of the junior team from 2012-2015. Last year in this event, Great Britain finished first, followed by Germany and Italy. The United States finished in 18th place. This year, there are 11 entries in the event.

Elizabeth Ray (Miami, Fla.) of Columbia University returns to the U23 National Team for the second straight year alongside Grace Joyce (Northfield, Ill.) from the University of Wisconsin. Last year in this event, Italy came in first place, followed by Germany and Great Britain. The United States finished in 13th place. This year, there are 10 entries in the event.

Michael Wilson (Braintree, Mass.), Kieran Edwards (Arcata, Calif.) and Jarrett Heflin (Wayzata, Minn.) will represent the United States for the first time as members of the U23 National Team. Edward "Cooper" Tuckerman (Bozeman, Mont.) represented the U.S. last year as part of the Junior National Team, where he rowed in the double sculls. Last year in this event, Italy came in first place, followed by Ireland and the United States. This year, there are six entries in the event.

The lightweight women's quadruple sculls has three national team veterans and one newcomer. Sarah McErlean(Vevey, Switzerland) rowed in the double sculls at the 2018 World Rowing Junior Championships, while Caroline O'Brien (Darien, Conn.) is making her second Under 23 National Team appearance. Olivia Farrar (Pittsford, N.Y.) is making her fourth consecutive U23 National Team appearance. Emma Starr (Walnut Creek, Calif.) is making her national team debut. Last year in this event, Italy came in first place, followed by The Netherlands and France. The United States finished sixth. This year, there are five entries in the event.

Emily Molins (Wilmette, Ill.) is making her first national team appearance and Sarah Maietta (Wayland, Mass.) is returning to the Under 23 National Team for the second consecutive year. Maietta won gold in the event last year. Last year in this event, the United States won gold, followed by Germany and Italy. This year, there are five entries in the event.

Coxswain Woods Connell (Bethesda, Md.) makes his return to the Under 23 National Team after coxing in the 2018 World Rowing Under 23 Championships. This Washington-heavy boat includes four Huskies. Andrew Gaard(Madison, Wis.) Sam Halbert (Redmond, Wash.), Chris Carlson (Bedford, N.H.), and Madison Molitor (Moses Lake, Wash.) all represent the purple and gold during the academic season. Gaard has appeared on two previous national teams, the Junior National Team in 2015, where he won a silver medal, and the Under 23 squad in 2018, where he won gold. Halbert and Molitor's only other national team experience came as part of the gold-medal winning eight at the 2018 World Rowing Under 23 Championships. Carlson has been a part of the last two Under 23 National Teams, both in the eight. Andrew Knoll (Greenback, Tenn.), from the United States Naval Academy, joins the eight after being on the 2018 Under 23 Team. Alex Miklasevich (Pittsburgh, Pa.) has been a member of three national teams. He appeared on the Junior National Team in 2013 and 2014, before racing on the Under 23 squad in 2018. William Creedon (Denver, Colo.) is racing on his second national team after rowing for the Under 23 Team in 2018. Justin Best (Kennett Square Pa.) was part of the eight that won gold in the 2018 World Rowing Under 23 Championships. He also appeared on the 2015 Junior National Team. Last year in this event, the United States won gold, followed by Great Britain and Romania. This year, there are nine entries in the event.

Isabel Weiss (Chicago, Ill.) is on her second national team after coxing in the 2018 World Rowing Under 23 Championships. Larkspur Skov (Steamboat Springs, Colo.), Mary (Daisy) Mazzio-Manson (Wellesley, Mass.), Kinsey McNamara (Chelmsford, Mass.) and Sophia Kershner (Palmyra, Va.) will make their first international appearances. Kendall Fearnley (Huntington Beach, Calif.) is one of the few rowers in the boat with international racing experience, as she was a member of the 2016 Junior National Team. Another athlete with international experience is Jeri Rhodes (St. Louis, Mo.), who hails from the University of Michigan. She was an alternate on the 2018 Junior National Team. Teammates at Ohio State, Sierra Tiede (Missoula, Mont.) and Madeline Perrett(Ann Arbor, Mich.), round out the eight. Both Buckeyes are racing on their first national team. Last year in this event, Canada came in first place, followed by the Netherlands and the United States. This year, there are five entries in the event.

Racing is scheduled kick off tomorrow with heats at 8:00 a.m. and repechages at 9:05 a.m. Friday's racing includes the remaining repechages, quarterfinals and the first of the semifinals. Saturday's racing is highlighted by the remaining semifinals and races for medals in 10 boat categories. Finals in the other 12 events will take place on Sunday.

Ruby Willis and Grace Holland placed second in their women's pair heat and move to the A/B semi-final.

Ben Taylor, Sam Jones, Thomas Mackintosh and Thomas Russel placed first in their men's four heat and move to the A Final. 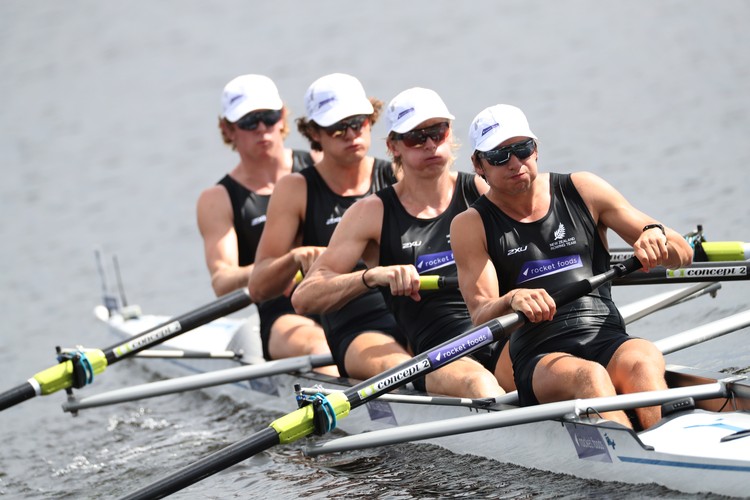