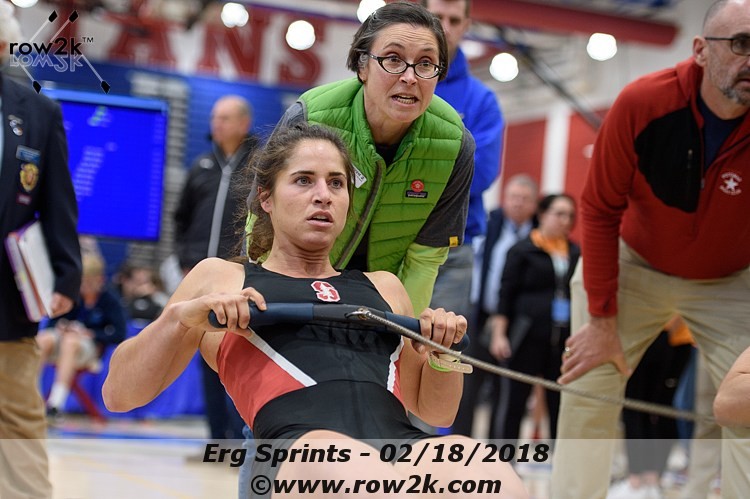 Christine Cavallo on the way to a World Indoor Record

Whenever Christine Cavallo needs some extra motivation, or a reminder that she can achieve the goals she sets for herself in rowing, she watches the video of a 2013 erg race she pulled when she was a junior at the C.R.A.S.H.-B Sprints in Boston.

It's the video of Cavallo setting the junior women's lightweight world record, the race where Concept2's British division spokesperson Alex Dunne stood behind her while calling the race over the public-address system. The one where Dunne predicted Cavallo was about to unleash an even faster sprint.

"Toward the end of the race, the announcer was behind me and he was saying 'Christine Cavallo is going for it. She's at 145 now and that puts her on pace for a 7:04 split, but I think she’s got a big finish in her, I think she can do it.' Word for word that's what he said," Cavallo recalled Saturday.

Cavallo never forgot that day. Not because she was upset at the record, she was proud of the piece and used it for motivation, after all, she set the world record, breaking the one she had set just two weeks before that. She finished in 7:05.7, besting the 7:06.3 she pulled at the Florida Erg Sprints.

"This is super embarrassing," Cavallo said. "But whenever I would get down on myself in college and training, I would like to go back and look at what I did before, every now and then I would go back and watch that video, because it showed me how hard I worked to put that together, and to not lose faith in what I was doing.

"After watching it, I’d stand a bit taller. I’d go back to it to remind myself of what I accomplished before I got to get to that place. It's embarrassing, but it helped me to stay proud of how much work I put in."

Still, every time she watched it, she remembered Dunne's call and watching the splits creep up.

She said she didn't do another 2K until her senior year at Stanford University. "In high school, my race plan was so on the fringe that I would pass out for about a half hour after every race - just like, done. "I didn’t do a 2K at all in college until my senior year.

"And then I basically held a 145 and then sprinted and, I got a 6:55. I sprinted down to the end of the piece, and then got up and went to my teammates, and started coaching them instantly. I could finish that race and talk to the people next to me. I was in a different place."

This winter, Cavallo set a goal to qualify for the first World Rowing Indoor Championships in Alexandria, Virginia and marked the date on her calendar. But the race was just a part of her training and not her goal for the coming season.

When she entered the race, she didn't even list her name until she qualified last week at an event in California, and was rewarded with funded travel to T.C. Williams High School and another chance at a defining moment on the erg Sunday.

When her time to race in the open women's lightweight event arrived, Cavallo had that last erg competition in her mind, and that call. But she didn't know that Dunne was going to be in Alexandria, or that he would be calling the race. She said she flew in for the race on Saturday, but stayed away from the venue to avoid distractions.

And Sunday, while she was pulling the race of her life, and holding down the kind of splits that would see her set a new world record, she was feeling strong and had no doubt she would have the kind of sprint that evaded her in 2013. And then she spotted Dunne walking towards her with a microphone and to begin calling the race again.

"I'm pretty sure I was still in the piece when I saw him and thought, that's him. Same guy." Cavallo didn’t need to any more motivation, but, she said, "I never forgot that. And I was thinking redemption, I was thinking redemption the whole year. It was just helpful that he was one that got to call it, that put the cherry on top, it felt full circle." Cavallo finished in 6:54.1, shaving .06 off the previous record of 6:54.7 set in 2010 by Ursula Grobler.

Saturday, when she finished the piece, Cavallo was all smiles and ready for Dunne. He leaned in with his microphone and asked her something that was hard to hear over the noise of the rest of the field still pulling, but it sounded like a question about where she found the motivation to sprint like. And Cavallo reminded him of that day back in 2013.

Watch the 2013 race video here with Dunne calling the race behind her.