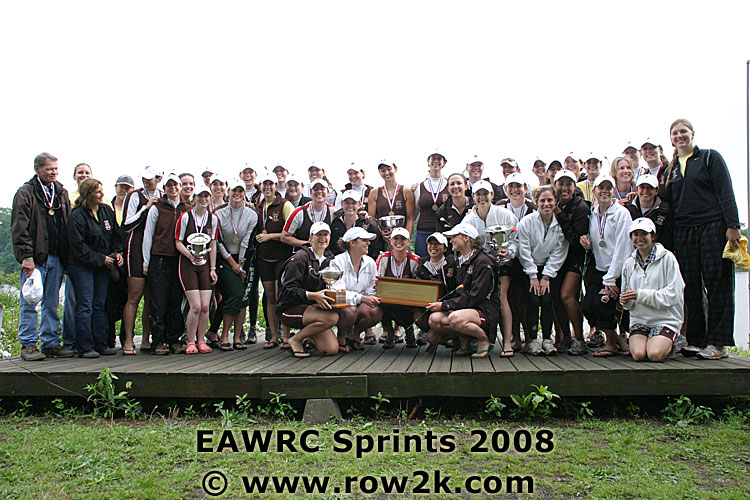 The Brown women are known for stunning year-end makeovers that can take them from the middle of the pack to way out in front, but most previous exertions of this proclivity came in the final two weeks of the season in the run-up to the NCAA Championship. This year, however, an unusually slow start for the Bears may have forced the hand of the coaching team of John and Phoebe Murphy and their Bear clan to work the same magic in April that they usually save for late May.

It certainly seemed the case on Sunday, when Brown won the Varsity eight in a bruising race that saw three different leaders in the first 1000 meters, and a blitz to the wire by Brown and Yale that left the crews in a heap beyond the line, and Brown with a 1/3 length victory to take the Sprints crown.

After opening the season with a nine second loss to Princeton, by the time the end of the regular season arrived two weeks ago, Brown had been able to find the speed to best the then-undefeated Yale women's crew in their annual dual ? but a dual meet win on home waters is not the proof of the pudding that yesterday's sweep of the three big eights events (Varsity, Second Varsity, and Novice Eight) and a second place in the Varsity Four at the Eastern Sprints proved to be.

In the Varsity eight, Brown rowed near the front of the pack with Yale and Princeton for the first half of the race before pushing their bow ahead shortly after the 1000 meter mark. Yale was the only crew that could really go with them, and pursued Brown all the way down the course as the two crews extended away from the field, but simply could not break down Brown's defenses as the Brown crew tenaciously rowed higher and higher all the way through the final 700 meters of the course to win by a little bit over a second. A length or so back, Radcliffe was able to stage a late charge to nip Princeton by six tenths of a second for the bronze.

After the racing, Brown coach John Murphy hovered near the edges of his team's celebration during boatloading, talking with parents and thinking back on the season. "I would say it was a gradual improvement," Murphy said of the turnaround over the past several weeks. "There was nothing really special that we did, and there wasn't necessarily any big breakthrough; they just got a little better day by day."

Part of the process included bringing up two oarswomen from the freshman squad, and moving other folks around. "We have generally resisted doing that (bringing up freshmen), and I know some of the other squads here have resisted this as well. But after our race down in Princeton, we knew we had to do something."

At Yale, Murphy was "I wouldn't say I was shocked, but I definitely would say I was pleasantly surprised." But I also knew it was going to be hard times when Yale went back to Derby, so I expected them to be very good here, and knew that both Princeton and Radcliffe would be very good as well. So going into the final, I didn't really know what to expect, but I thought they could do it, and had as good a shot as anybody to win the race."

Going into Nationals, does Brown have any more changes in store? "Well you know, anything we see, we will do, but we don't usually have any plans to make really big changes," he said. As for the field that will likely be racing at NCAA's, Murphy hasn't really looked ahead yet. "It's hard to figure out exactly how fast the whole field will be, but I think it is a very deep group, and the racing will be very good," he said. "I am concerned when I hear about triple-digit temperatures in Sacramento, but hopefully the NCAA people will race as early as possible to get the cooler temperatures in the morning."

The Wisco women had a similar day on the Cooper River, winning all three lightweight events, including the Varsity 8 in dramatic fashion, rowing from fourth place in the middle of the race through the field, and only edging into the lead in the final strokes of the race, followed by Princeton and Georgetown for the medal positions.

Wisco also overcame a slow start to the season, caused in part by an exceptionally long winter in the northern Midwest; the crew did not get on the water until well into April, and came into Sprints seeded fourth. Wisco was also forced to make big lineup changes of a different nature late this past week when their Varsity 8 stroke Margot Schoellkopf was hit by a car while riding her bicycle on Thursday. According to coach Erik Miller, she is doing better, and was released from the hospital on Sunday; he hopes to have her back in the boats for the IRA Regatta in June.

Miller rerigged for a port stroke, and Kristin Hedstrom, who had stroked the crew earlier in the season, went back into the stroke seat for the final-only championship. A member of the 2V moved up into the 1V, a V4 member into the 2V, and a another oarswomen went into the four, as all three varsity boats rowed in new lineups for the first time on the weekend. The group went on to win all three events, and were even joined by the Novice Eight to collect gold medals.

"The team did a great job of supporting each other and taking care of each other," Miller said. Of the turnaround in fortunes on the racecourse, Miller said that the crew was finally coming together after the late and slow start earlier this season. "If you had asked me back in the middle of winter whether I thought we could win the race, I would have said I was fairly confident we could do it. But a few weeks ago, it definitely was not a given. The whole team really came together here, and I couldn't be more proud of them."

Despite getting nipped in the V8, Yale had a good day overall as well, medaling in all three NCAA events, gold in the V4 among them. Additional medalists in the top events include:
2v8:
Brown
Dartmouth
Yale

row2k's EAWRC Sprints coverage is brought to you in part by: