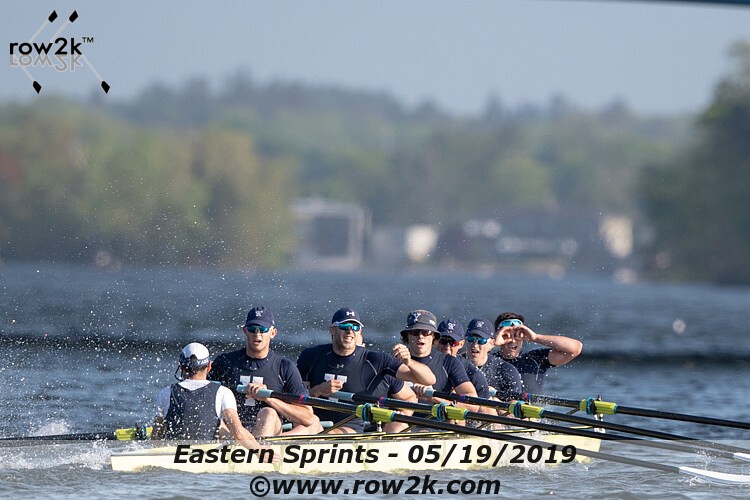 The Yale Heavyweights rolled into Worcester and over the field at the Men's Sprints this Sunday, winning the 1V, 3V, 4V, 5V and 6V heavy eights events. Yale also claimed the Rowe Cup for Heavyweight points for the third successive year, but not nearly as dominant as you might expect -- Harvard actually tied Yale in the Rowe Cup standings on the strength of a win in the 2V, and a bronze in the 3V, but Yale claimed the overall win based on the tiebreaker in the Varsity Eight.

On the Lightweight side, the Penn Varsity rowed a long-standing monkey off their back with their first win at Sprints since 1976; the Yale lightweights claimed the Jope Cup on the strength of silver medal finishes in the 1V, 2V and 3V events.

Today's win is Yale's 5th straight in the Varsity, but it may have been their most dominant one of the current streak, as the Bulldogs cannoned out of the start and went on to win against a deep field by almost six seconds.

"This year has just been so much fun being amongst the guys," said Yale six-seat Charlie Elwes after the race. "We had no hiccups, no upsets along the way, no injury, no illness. Last year, I was out for nine weeks for rib injury. This year training all the way through with the guys, going through the dual season, it's just unreal."

As was the case with all of the Yale heavies row2k spoke with, Elwes was quick to credit the group dynamic and the coaching with Yale's success.

"These accomplishments get better and better every year," said Elwes. "In my freshmen year, the Varsity was the only eight to win. Throughout my four years, we just felt all the love, and it's just been getting better and better. We've got a process, we trust it, we trust Steve immensely, and it works." 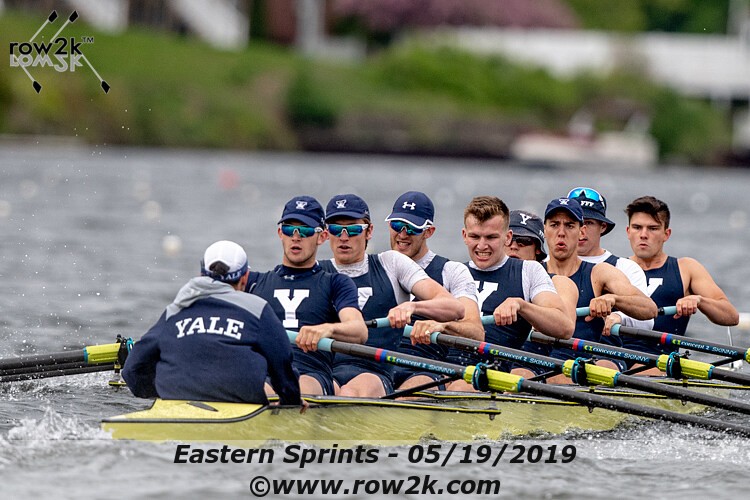 The Harvard 1V, who had been pegged by many to give Yale their stiffest challenge on the day, looked visibly gutted to have been as badly beaten, but according to Harvard coach Charlie Butt, it was a natural reaction in a fierce rivalry.

"Oh absolutely. That's what you would expect. They're a strong team, and you got to face up to it and get on with it and race them," said Butt. "We were just out there to have a good run. If we're fast enough, we're fast enough, if not... that's just the way you have to approach things. It's got to be about giving a terrific effort from the guys, so they can take satisfaction."

"That's a significant win, but we have respect for people we race," said Yale coach Steve Gladstone. "It's never automatic. That performance is very satisfying, and what's equally satisfying is the squad and all of the components. "

Gladstone pointed out that Elwes, along with '18 Yale graduates Sholto Carnegie and Paul Jacquot, are the only rowers in the history of Men's Sprints to win the Varsity Eight four times (freshmen were barred by league rules from competing in Varsity boats at Sprints until about five years ago). 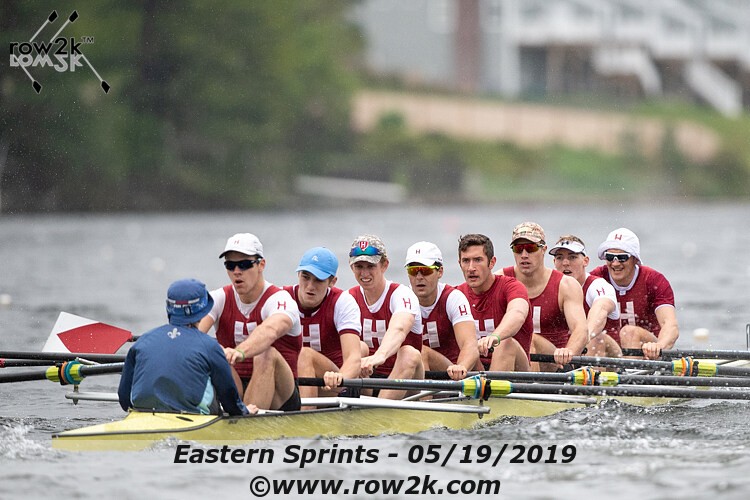 The Harvard 2V broke up the Yale sweep

Harvard broke up the Yale sweep with a win in the 2V, beating Brown and Princeton to the line in the final.

"We certainly went in hoping to achieve that," said Harvard stroke David Fleming. "We went in with a decent amount of confidence with that, because we found some good speed in practice and we had some good executions in the race environment."

Despite their dominance, Fleming wasn't willing to focus exclusively on Yale. "It's always interesting heading into sprints, the dual season is a different beast. They've certainly established themselves as the team to beat. In our race they fell back a little bit, but we handled it well and I think we did a really good job at just focusing about our own boat. Anything can happen at Sprints. Regarding Yale, we've got a regatta with them a little later in the year. " 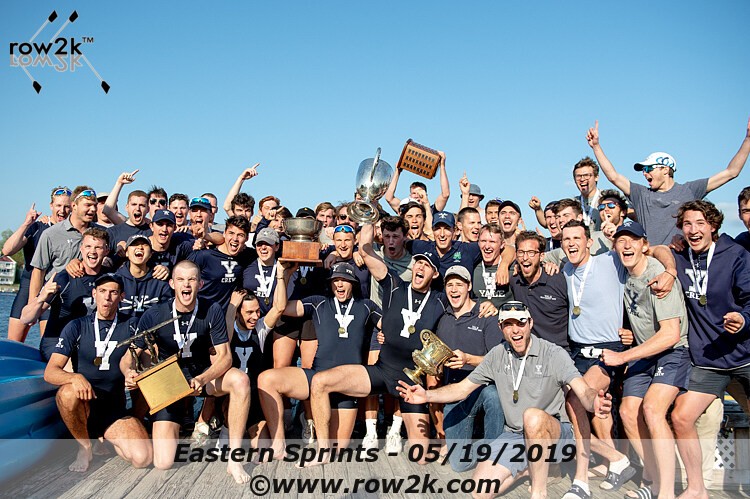 'Squad is everything,' Yale heavies celebrate the team title

Yale won the 3V through the 6V heavy eights, and across the board, Yale athletes touched on the importance of the squad dynamic in getting to this point.

"I think it's natural for anyone to want to be in a better boat, and that's what makes it really competitive," said Tommy Fant, coxswain of the Yale 3V. "I'd say, a couple weeks out from sprints people need to be okay with where they're at, and foster that competitiveness in a different outlet. A few people are never satisfied, but that's a great thing," he said.

"Yes, it is great to win the major event, no doubt about it, but team culture always needs to be nurtured, and the squad is everything," added Gladstone.

"The basic message that's delivered is that every person who comes down on a daily basis, and endeavors to bring full measure, has full respect. So, whether you're in the 1V, 4V, if you're bringing it both mentally and all levels, then respect is there. I use the word endeavor, because none of us are going to hit 100%. If you would endeavor every day to get a little faster, a little fitter, and more technically proficient, then you're worthy of respect, period. "

Yale's commitment to team depth has had positive ripple effects around the league, as Navy assistant coach John Flynn pointed out. "With Yale fielding six boats, our guys get to race at Sprints," Flynn said. "We run seven or eight eights deep, and it makes a huge difference to our guys during the year knowing that they will have an opponent here. I think it's great."

The heavyweight 6V was a two-boat race, with Yale taking the win over Navy.

Rowing as if they were made for this, the Penn Varsity Lightweights went hell-for-leather off the start into the strong headwind, built a huge lead, and then held on to claim their first win in the Varsity Eight since Gerald Ford was president. Perhaps more surprising than the win was the fact that the Quakers did it out of Lane 6; a monumental win, soup to nuts.

One person who was not necessarily surprised was Penn coach Colin Farrell. "I think this was a year where it seemed any team could win it," he said. "It was really competitive all year, and you saw that this morning in the heats. We came here to try to win the race; that was our goal the whole year. I don't think what the other teams are doing today really changed our approach. We made some adjustments after the heat, they did a really good job executing it." 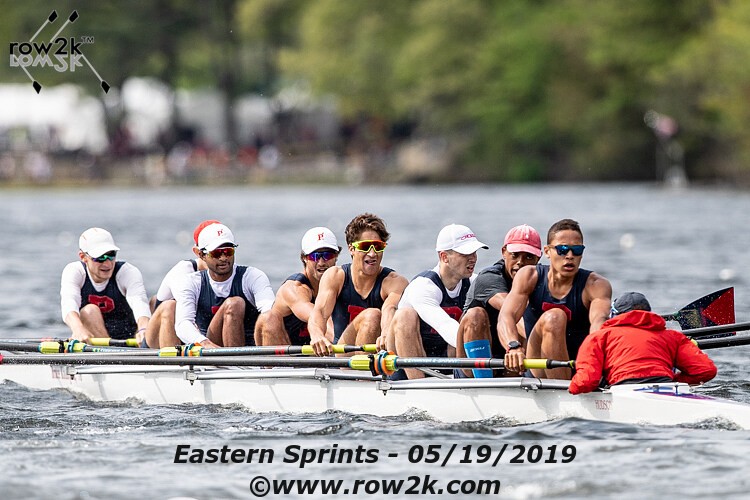 The Penn Light 1V took it outside

Like Gladstone, Farrell paid tribute to the dynamic in leading to the day's results. "I came to Penn to try to change the culture here and help this team get to the top, so it's the day we've been working to for five years," said Farrell. "At some point, it may hit me that we actually did it, but it's been the mission all along."

Perhaps fittingly, Penn was racing in the "Bruce Konopka '78" today; Konopka, the longtime coach of the Penn Lights, was in the boat the last time Penn won the event.

It's almost a cliché by now, but the EARC Lightweight league is so deep that, if you are not on your toes, you can be out of the game pretty quickly. Cornell, the top-seeded Varsity eight, was on the wrong end of a four boat canvas finish in the heats and was relegated to the petite final, along with 5-seed Harvard.

On the clock, the Cornell lights posted a slightly faster time in the Petite than Penn did in winning the Grand 15 minutes later, so the duels for lightweight supremacy are likely to go another round at the IRA.

In a collegial move in a very collegial league, the Cornell lights were quick to give Penn (and Cornell alum Farrell) their due.

Cornell won the Lightweight 2V, and after the racing, Cornell assistant coach Bill Brumsted reflected on the challenges of preparing athletes for racing in a league where the racing is so deeply competitive.

"I think getting the athletes to wrap their heads around the reality of the level of competition is always a challenge, even when you're having a successful regular season," said Brumstead. "You need a systematic approach, and I would say we still tweak it on a year to year basis based off of what we see as opportunities. Definitely a challenging league to be a part of. And rewarding."

The lightweight 2V trophy is officially named the "Cornell Trophy," so whenever Cornell wins the 2V there's extra mirth on the podium. 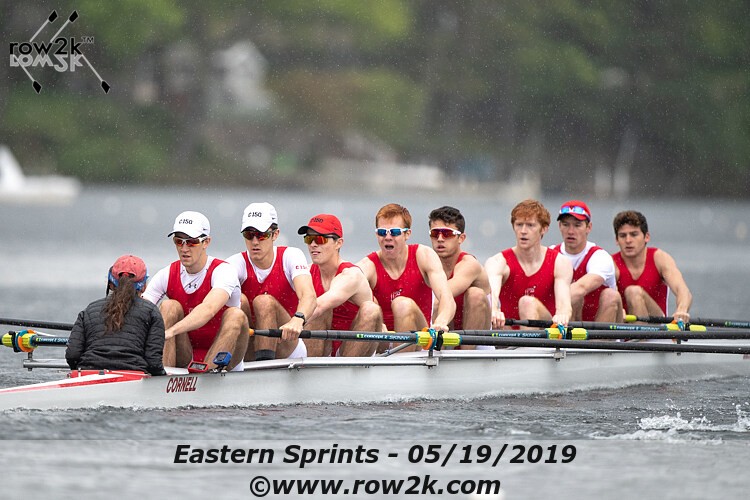 Despite not winning an event outright, the Yale lights threw down three silver-medal finishes to claim the Jope Cup for lightweight points.

"This is pretty full circle for me, we won this is 2016, my freshmen year," said Yale captain Matt Matejka. "Especially after last year when we were not near this cup, to finish this year with what I believe is the deepest team we ever had, is incredibly special. Every boat did their job to get these points. Penn drove hard after us in every event all day, and we did our job to hold them off. Every one of our athletes medaled today, either gold or silver."

Did the raging headwind make things even more difficult for the lightweights? Not everyone thought so. "I'd say it's a myth," said Navy's Matthew Pentaleri, stroke of Navy's winning Lightweight 3V. "Keep it high, and blade in, blade out, hang on it, and then it's just a pretty simple sport."

Yale claimed the lightweight 4V, and Harvard the 5V.

Overheard on the shores after the Cornell Lightweight 1V failed to qualify for the afternoon. "The racing in the lightweight sprints league is unbelievable." The response from a lightweight coach standing nearby came straight away: "No, it's believable!"

An ever larger proportion of the post-race boatyard conversations between competitors and former junior national team crew mates at Sprints are now taking place in languages other than English. 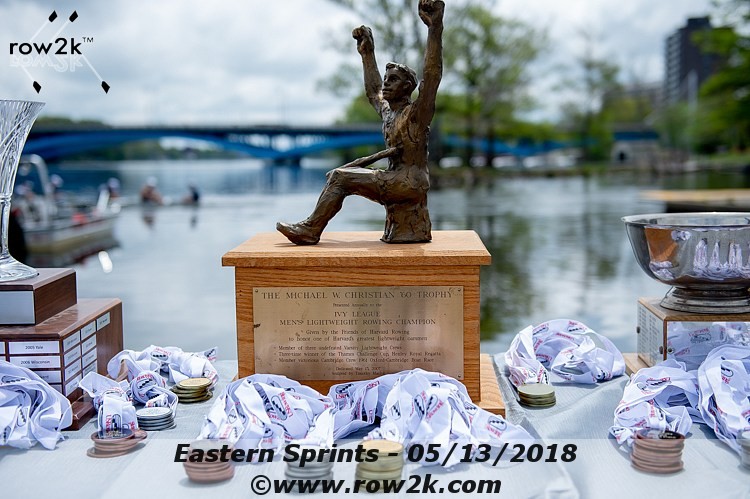