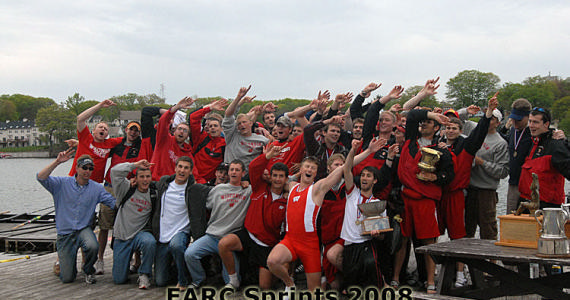 It was a sea of red on the awards dock in Worcester on Sunday as the Wisco heavy men won the two big varsity eight events to take their first team trophy since 1946, and the Cornell lights found their late-season speed a bit earlier than usual this year.

"Every year is a re-building year," said Cornell Coach Todd Kennett after his Lightweight 8 took the gold at Quinsigamond Sunday in the EARC Sprints. For the second year running, Cornell came from the middle of the ranking pack to win in the final 1000 of a championship race (last year they did this at the IRA). Consider them re-built.

Early in the race, Yale was leading at about a 45, Princeton (same rate) was two seats down, while Cornell was at a 42 and even with Princeton. Once the crews settled, Cornell remained about a beat lower than the other crews, and it appeared to be two races: Cornell, Princeton and Yale fighting for a nice spot on the awards dock; Navy, Dartmouth and Columbia several seconds back. At the 1000, Cornell made a clear move, leaving the Princeton and Yale to respond. Neither could muster one, and Cornell had a 3-second margin at the finish as almost 20 seconds separated the crews in the LW final. Harvard was conspicuously absent from the lightweight grand finals in all five events; the Harvard light varsity have appeared in every Grand Final for more than the past 60 years, the complete history of lightweight rowing at Sprints.

Cornell graduated 5 seniors from the Varsity boat last year, one a coxswain. Last year's athletes took second to Steve Perry's Dartmouth team, and won at the IRAs weeks later. At Henley in 2007, Cornell lights were in the final of the Temple Challenge Cup, ultimately losing to Cal. There were only two seniors in the boat at the Sprints, but according to Kennett, "They hadn't really been tested when we started the season."

This year's 4th place ranking going into the Sprints is a result of some tough losses early on. On one brutal day in April, Cornell lights raced in the morning at Princeton and lost, then drove to Yale and lost by more in rough water the same day. "It was a hard day for us, it was meant to test the guys. We learned a lot about what we needed to do for the season on that day," said Kennett. Cornell, who trains in cold, often-frozen Ithaca, had to do some focused training to make changes in just weeks for the Sprints.

At the Sprints, Kennett says they didn't have a concrete race plan. "Our entire race plan is about what gives us the most speed. We don't worry about starts or where the other boats are." After some thought, he added "but we don't want to give up real estate either, and we have answers to different problems that may come up - one of them being if we were behind at the start." Though he didn't specify the 'answer' to that problem, the coxswain and the crew had it figured out.

Cornell grabbed the Jope Cup from Yale despite a points tie, with the V8 result as the tie-breaker that gave Cornell the edge and the Cup. Andy Card of Yale said, "We got a gold, silver and bronze today- from my perspective, it was a good day." "I give Cornell a lot of credit - they really get ready for the Championships," added Card, whose crew was in third at the finish line. The Yale Freshman Lights won their event, a testament to their depth and the coaching of Joe Fallon, an IRA champ in 2005 as rower and only one loss in two years as a coach. Card likened the rankings and race results to musical chairs; his advice: "Keep playing."

Not coincidentally, another cold-climate crew, Wisconsin, had things figured out at the Sprints this year. "We got on the water the latest we ever have this year: April 10," said Wisconsin Coach Chris Clark. "Rowing is about taking strokes, not training indoors, but with the right collection of individuals... they adapt naturally."

The crew, lead by twin-brother stern-pair of Grant and Ross James, had four relative novices in the boat. The James brothers came to Wisconsin via a registration-line grab. They were involved in Olympic-style shooting events prior to rowing, but their 6-5, 190 frame fit Coach Chris Clark criteria of "looking like a rower." The Wisconsin stern-3 have rowed for 2 years each, three and four seat were walk-ons three years ago. Clark admits that the 6-seat, though not a rower, was a Maryland state champion miler and cross-country runner, and at 6'6", well, this sounds good. When asked about the race plan at Finals, Clark said: "They all know what to do; we never had an official meeting or breakdown of the race... we have practice tomorrow, we will discuss it then."

To recap: five-of-eight new rowers, five weeks of rowing on the water, long travel prior to the event: won the Sprints, take home the Rowe Cup. Wisco also took the 2V event, so there may be more where those guys came from.

Clark is quick to note that their win is no indicator of how things will go three weeks from now at the IRAs. "There are a lot of talented crews out there- it's not a given that any team is going to get better. We need to take a step to the next level?at IRAs you can't just revisit where you were." Wisco will travel to Navy for a regatta May 30, then will stay on the East Coast and arrive at the Cooper River early.

The awards dock had a lot of red, but not as much Crimson as history has seen to date. For the first time in 44 years (note that Harry Parker has been leading this program for 46 years), Harvard did not make the Grand Final in the Varsity race, and ultimately finished second to Navy in the Petite Final, eighth overall.

Parker has won 21 Sprints titles while at Harvard, and missing it this time, well, it just happened. "I was really pleased with how the boats raced?all of them raced well---the disappointment was that we did not make the finals; there was close competition in the heats," said Parker. (Princeton and Yale advanced to the finals from Heat 3, Harvard was .6 down)

Harvard won gold in the Freshman 8, and silver in the 2V, so Parker is expecting fast crews for next year. Last year's winning (and course-record setting) Crimson Varsity 8 graduated 4 seniors, "We lost some pretty good people," says Parker.

In the three week stretch between Sprints and IRAs, the Harvard student-athletes have exams and then back at training - hard. As for changes in the boat? "That's not clear at this point--I never really rule that out," said Parker.

All coaches who spoke to row2k indicated that the season is far from over, and lots can happen over the next few weeks. With a couple more weeks on the water, boat speed can really come around and racing will be a new game.

Onward to the IRAs!