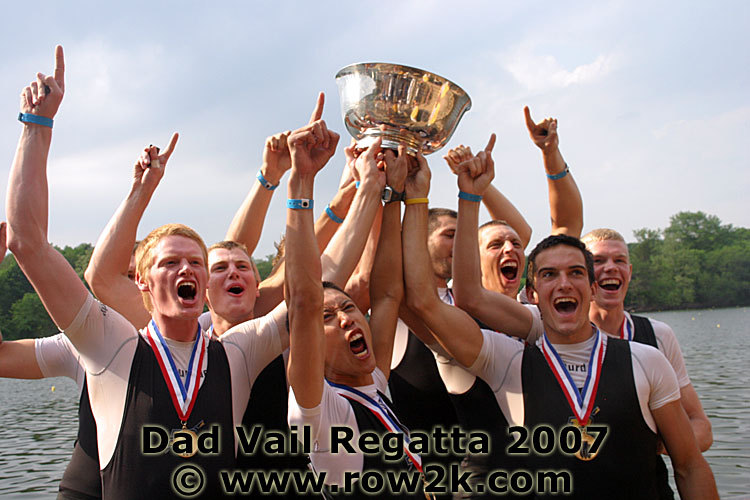 The official school song of Purdue University is a somewhat stodgily-titled "Hail Purdue," but in recent years the song has been amended to include something a bit more aggressive-sounding – the exclamation "Boiler Up!" complete with an air punch.

Anyone at the Dad Vails this afternoon who didn't know this before today is completely cured of their ignorance, as the Boilermakers took the final two premier races of the day, the men's and women's varsity eights, and nabbed the overall points trophy in the offing. The women's eight got a full Boiler Up treatment, then the men got the same, and finally the entire program chimed in when the points were finally tallied; you could say it was a day made for a Boilermaker.

Purdue chalked up a few big firsts today; despite having taken the points trophy something like seven of the last 10 years, this is the school's first gold medal in the men's eight, and (obviously then) the first time they won both the big eights events. (This has happened only twice before since the addition of the W8 in 1976, when Temple did it in 1994 and 1996). The Purdue women did win the eight previously, 10 years ago.

The Purdue women came into the event seeded fifth, largely due to inconsistent racing this season, according to coach Jake Hatch.

"The crew is strong and they row well," he said, "but they have been up and down this season with trouble getting their racing together from a maturity standpoint. It has been a learning year for us, and it all came together today."

Men's coach Dave Kucik was not surprised by his crew's win, but he was clearly emotional on the medals dock, and his admiration for the crew's effort showed. "You always think you can win," Kucik said, "but this crew had a little something special." Kucik chalked it up to "a bit of synergy. A few of these guys won the frosh eight a couple years ago; there are a few different people in this crew, but there is really a lot of desire and a lot of fight in the crew."

As to taking both eights, Kucik exclaimed "It's just awesome. It should be a great ride home."

More notes from the Vails: Dowling crews took two gold medals today, and still have the international feel they have become known for; after a win in the women's DII/DIII eight, in which crew Dowling has six international students, considerable parts of the celebration were conducted in other than English; in the men's four, the crew was forced to break down from an eight earlier this year when three crew members, two from Poland and one from Slovakia, had to head home to try out for their respective Olympic teams, according to men's coach Frank Pizzardi, Jr.

The Georgia Tech light eight repeated as champs this year, and should contend for another run next year; the crew returned five members from last year's eight, and will return six from this year's eight in 2008.

Fordham's win in the men's four is their fifth in the past few years. The young crew, which includes a junior, two sophomores, a frosh, and a junior coxswain, found their speed earlier this year at the Murphy Cup when they drew Dowling in a one-to-the-final heat that also was to include a "fastest time" qualifier. "They had some trouble with the stakeboats due to the big storm, so they dropped the fastest time qualifier," said coach Ted Bonanno. "So I told the guys, well, you have to have the fastest time – you have to win!" The crew met the challenge, and hasn't slowed down since.

The Cal State Long Beach silver medal light women's eight all but came out of nowhere –literally. The crew includes six novices, four of whom did not row before February, according to coach Brent. "They're decent athletes, but they didn't come to rowing from other sports; we just picked them off campus," he said. "They all decided they wanted to go to the IRA, tho, and they showed up 20" early for every practice, every day, to do the work to make it happen."

Finally, I may have this wrong, but I'm pretty sure Ohio State won the women's point trophy; if I'm right, that' not bad for a club program that rows in the shadow of a big DI squad.