The song claims that it never rains in Southern California. But it does occasionally get foggy, and that was the case on Mission Bay for finals day at the 2016 San Diego Crew Classic. As a result, the regatta got underway a bit late this morning; after the fog burned off, the schedule was condensed to seven minute centers.

Come mid-morning, the big matchup in the Copley Cup final between the Yale and California men's first varsity eights turned out to be somewhat anticlimatic. The two pre-race favorites and heat winners did separate themselves from the field - but Yale, rowing in lane two, led early in the race, led by even more through the body of that race and romped to a big open water victory of nearly seven seconds at the finish line; Cal was in second, with another nine second from them to bronze medalist Drexel. After the race, Yale head coach Steve Gladstone was typically humble and reserved.

"We rowed a good race," he said. "I'm pleased with their development." And then it was off to meet his crew at the beach and on to the trophy stage.

The Whittier Cup final for the top women's eights started off with a right grouping of Wisconsin, USC, Cal, and Texas. But the Cal Bears showed the best rhythm and staying power in the body of the race, and saw most of the field fade behind them. The Texas Longhorns kept the pressure on Cal as much as they could, but couldn't keep the Bears from winning the gold medals. 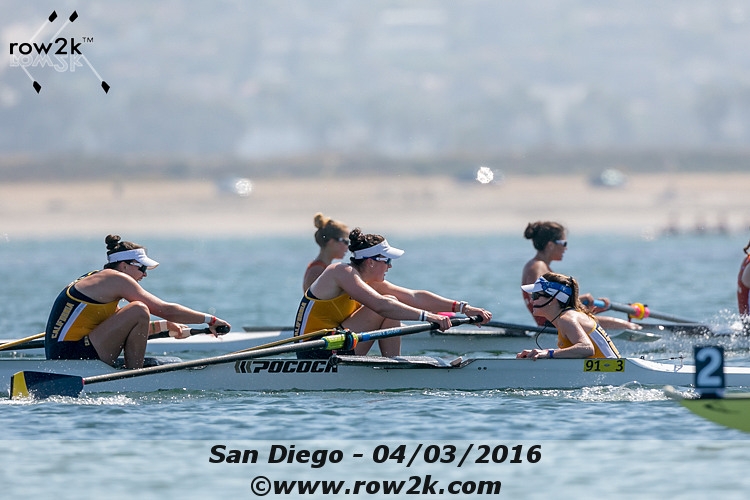 Coach Al Acosta was a bit more outgoing when I caught up with him – understandably so, as the squad won the V8, 2V8, 3V8, and V4 in the regatta.

"Credit to Wisconsin for rowing an awesome heat, probably an A plus," he said. "Our heat was a B or B minus. I was glad to see our boat get it together in such a short time and trust each other to have a better race in the final."

It shows that you don't have to win your heat to win the final; this has happened the past two years now, last year with USC coming back from a heats loss to Texas win the final, this year with Cal coming back after losing to Wisco.

"The first eight showed some good speed today, and it was a much better effort than yesterday's heat," said second-year UT head coach Dave O'Neill. "I'm encouraged for what they can be in the weeks ahead."

Defending champion USC had to make substitutions all the way through their ranks, and could not stay in the hunt to defend their title, placing third in the final, just ahead of Wisco.

After their impressive heat on Saturday, Wisconsin had to settle for fourth; "It was a really good weekend, and it was a good day today even though we were hoping for a little bit better results," Wisconsin head coach Bebe Bryans said. "I think our lack of experience on the water came and bit us a little bit."

The race for the men's Cal Cup had crews from California, Canada, the Midwest, and the East coast. The trophy and medals are headed back to The City of Brotherly with the victorious Temple Owls. Cal gained some consolation by winning the second eight race by a length over Yale and thoroughly dominating the third eight and novice eight races with lots of open water.

The women's Cal Cup final also featured a diverse field. The first place hardware will be heading back to South Beach as the University of Miami Hurricanes rowed to a convincing victory over Tennessee and Loyola Marymount. Close behind LMU was a photo finish with Old Dominion, San Diego State, and Kansas State.

Cal also captured the second eight medals with Texas again placing second. The USC Trojans finished third, spurred on by their pep band playing the fight song. Texas won the novice eight by a comfortable margin. Many conferences have morphed the novice eight event into a third varsity eight category. So look to the open eight results, as well as the four, for more indications of team depth.

Time to check out alumni tent row. The grills and BBQs are churning out a ton of food. Dilemmas abound; carne asada or pollo? Maybe a bit of both!