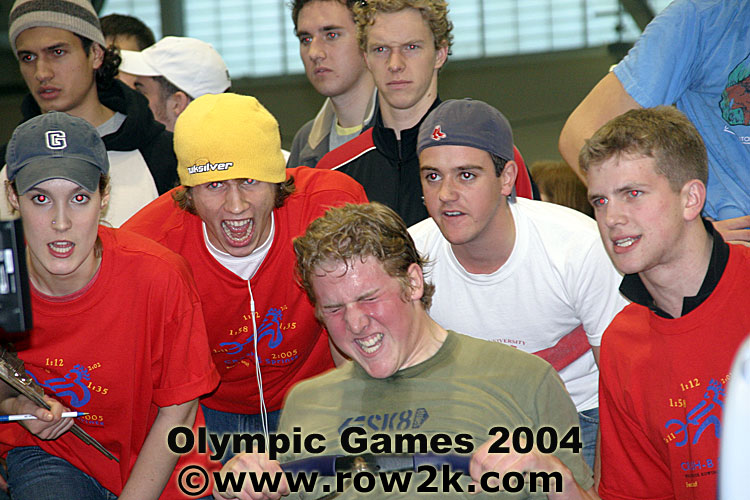 A couple of us figured out that there is no other sport that holds a world championship of a machine simulation of their sport - anyone care to debunk that notion? Other sports have fantasy leagues, video games, etc. ad nauseum; we have none of those, unless erging is the world's most painful video game.

All this borne of the observation that the CRASH-B's alternate between stunning and even deep, and freakish and even weird. To spend 11 hours under fluorescent lights photographing people torturing themselves to win an Ace Hardware hammer - yeesh.

Anyway, the CRASH-B's were entertaining enough. Some overheard remarks and observations from the 05 edition:

I heard at least three people hovering around the awards area say "I've never been on the water" - like I said, freakish and even weird.

Rowing web wonks will be sorry to learn that one international entrant went unobserved by the row2k camera - FISA website scribe Melissa Bray took a spin on the erg, but hid effectively under a green hat to avoid digicam scrutiny. Well played.

The format was different this year, and seemed to work well. Even the bullpen, home to walk-up fares participants, had its share of highlights; both Dan Debonis and Steve Tucker blasted out pieces in the entrance-front bullpen ghetto.

Post-race gut check of the day: Lisa Schlenker endured a harrowing charge from Juliane Elander of Denmark while getting no help by a bit of detraining that came home to roost and crow with about 700 to go. Just when everything looked about to fly apart, and people in the front row were pulling out safety goggles and helmets, Schlenker reeled it in, pushed down the splits, and won it. She stopped rowing, wiped the froth from her face, and soundlessly mouthed the words "Oh my god."

On the other hand, in the next race a junior rower was seen doing a full "row hard for eight strokes, stop for one and a half, go apeshit for six strokes, stop again" routine. On the stopped strokes, she was yelling "I can't, I can't!" Then the splits would go back down again. Her coach/coxswain was trying to give a hand until the rower screamed "Stop f$%#ing yelling!" Oof all around.

The German erg team coach is one of a kind; when he wanted one of his rowers to take the rating up, he started swatting them on the back on the recovery, and on the shoulder on the drive. He is one intense erg coxswain; reminds me of the Rodney Dangerfield line about the Sam Kinison character "he really cares - about what I'll never know…"

Fan comment of the day, to a medalist lying in a heap after the race: "It was terrific to watch you. Even in the last 200."

I don't know if I've been anywhere else that barfing is a spectator sport. Usually if folks see someone losing their belly, they look away in revulsion; here, people almost gather around.

Seeing double: no, not from fatigue - I saw three sets of twins rowing side by side on the day.

In my day as ambulance chaser and digital vampire, I took pictures pretty much only in the last 1000 meters - folks tend to get photogenic right around that point. I found it easy to know when to get to work; there was a palpable, unmistakable surge in energy during every race, all day, when the crews crossed the 1000. Halfway really means something when you're in deep misery.

Finally, the anecdote of the day; CRASH-B regular Jaxon Ruddock was originally recruited by BU as a coxswain. Ruddock called BU the summer before he was to arrive, and told Dave LeFebvre that he was thinking about rowing; LeFebvre told Ruddock that BU didn't have lightweight rowing, but he was welcome to try and see how it went. Ruddock explained that, well, he had grown 10 inches, and doubled his size from 110 lbs to 220 lbs. Talk about a stone gift to a coach during recruiting. This is no BS - check out BU's page dedicated to Jaxon's growth spurt. Vegemite?

Best comment getting off the erg: "I need a cheesesteak!"

Find results here. I suppose CRASH-B is a bit like rowing's groundhog day; spring isn't far off. See you on the water.

back to top
Get our Newsletter!
SUBSCRIBE
Support row2k!
If you rely on row2k, please support row2k!
Advertiser Index
Advertise on row2k