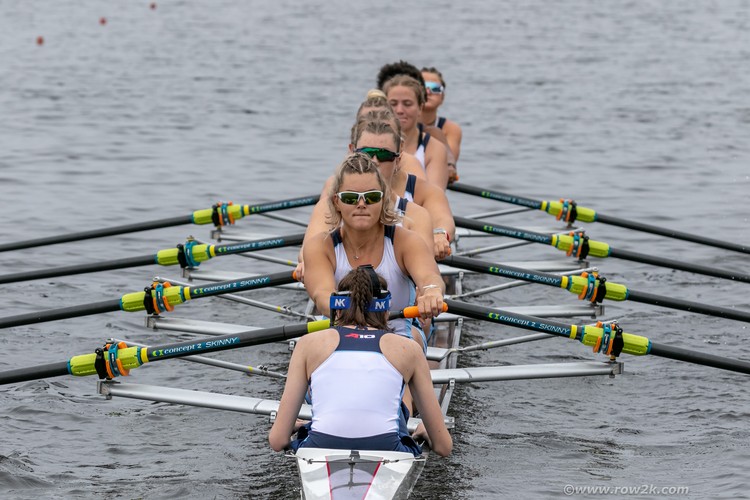 The next three Automatic Qualifier (AQ) bids for this year's NCAA D1 Championships went to the team champions in the ACC, the A-10, and West Coast Conferences in racing on Saturday.

Virginia once again took the ACC title, Rhode Island claimed the A-10 crown and Gonzaga won the West Coast Conference.

16th ranked Virginia won their 12th consecutive ACC title on Lake Hartwell Saturday morning, but this may have been one of their sweetest: the title--and the automatic return bid to NCAAs--was won by a Cavalier squad team seeded to finish third. On paper, the day was Syracuse's to win, with the Orange claiming the top seed in both the 1V and 2V eights; Duke was the top seed in the V4.

The heats told a different story, however, with Virginia's top three boats winning their opening race on Friday. 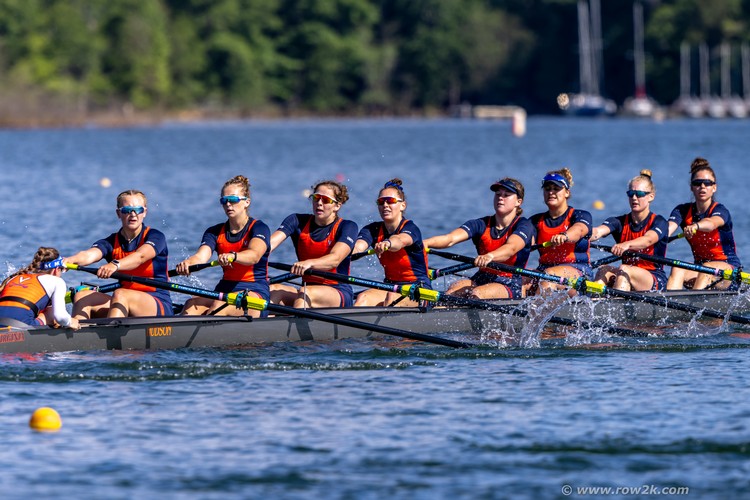 "The team really embraced the racing today and responded well," Virginia head coach Kevin Sauer told VirginiaSports.com on Friday. "There will need to be a lot more [in the finals]."

His Hoos delivered that "a lot more" in the finals, winning the 1V and 2V outright ahead of Syracuse, and taking the top-seeded Duke V4 down as well.

Despite the seedings this year that suggested there could be a change atop the ACC, it was Virginia again; Clemson (2009) remains the only other ACC school to have won the conference title.

"Every day I'm so proud of the character of this team and today so proud of them as racers," Sauer said. "Especially Syracuse and Duke were formidable opponents today and we are very fortunate to win this championship. Many thanks to Clemson for hosting."

Second place Syracuse, which ranks 11th in the latest Pocock CRCA poll and has victories against #8 Pennsylvania #14 Duke figures to be in the mix for At-Large invitations, as do the Duke Blue Devils. At-Large bids will be announced during the NCAA D1 Selection Show on Tuesday.

Rhode Island prevailed to repeat as champion of the A-10 at Cooper River, but not before George Washington, St Joe's and UMass did their best to put the points total in doubt heading into the final race.

Rhode Island started the the NCAA event finals with a win in the Varsity 4, while GW shadowed them in second. In the 2V eight, however, GW threw down a piece that gave them a decisive win over Rhode Island and a lead in the point tally. St Joe's, third in both races also remained in striking distance, with UMass, the top seed in the 1V lurking, and hoping to get into the mix in the last race of the day after winning their morning heat.

In the end--and in a massive downpour that that 1V eights endured while they sat on the line waiting for the official start time--Rhode Island triumphed in the 1st Varsity to win it all. GW was second and UMass (just back from a COVID pause that cancelled their last regular season race) took third, while the St Joe's 1V faded to 6th behind Fordham and Dayton-the Hawk's only non-podium finish in the last three races.

"It came down to the varsity eight, and that's what a championship should come down to," said URI Head Coach Shelagh Donohoe afterwards. "It makes it exciting. Our varsity really showed up and they put it on and they did a great job. They clinched the championship for us." 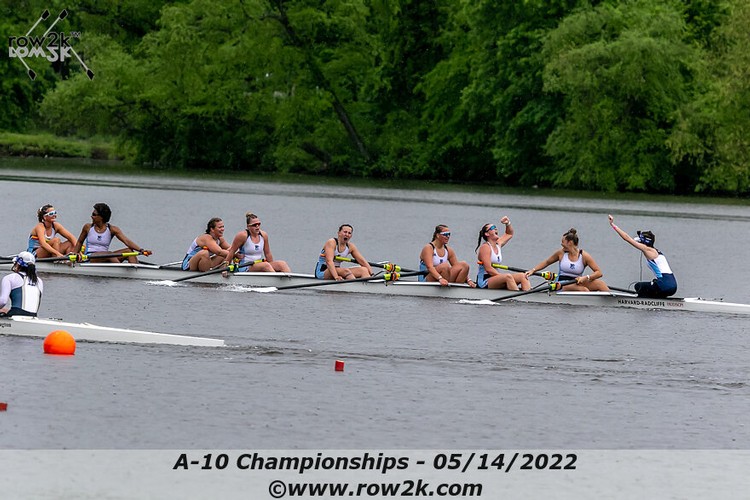 URI celebrating in the rain

"It's been a really long year," Donohoe said, "and it's been a hard year: not just for us, but for everybody in general. I think these athletes have been through a lot and to have them come today and really show up and get done what they were capable of doing is a really proud moment for me. They've been through a lot."

As fate and the forecast would have it, the downpour that soaked the varsity's at the end of a regatta that almost dodged the storms knocked out the overhead drone video, so for that most important race, Donohoe and her staff were forced to watch it the old school way: peering down the 2000 meter track to try and guess who might be ahead.

"What I was thinking was, 'Really? The video dies now? When the Varsity is at the 500?' But obviously that would just soothe me. What they're doing out there has nothing to do with me. I had faith in their fitness and what they were going to be able to do through the middle of the race, and I knew that that if they could do what they were capable of, we were going to be happy with the result."

URI also won the the non-NCAA event finals today, in the Varsity 4 "B" and the 3rd Varsity Eight.

Rhode Island which was not ranked in the most recent Pocock CRCA poll, will find out their seed for the NCAA Championship during the NCAA D1 Selection Show on Tuesday.

At Lake Natoma, the West Coast Conference also ran its Championship on Saturday, with Gonzaga making it a clean sweep on some glassy water to claim its 7th straight title and NCAA bid.

"We are so proud of this whole squad," head coach Andy Derrick told GoZags.com. "It is such a great group of women. Today was a great representation of the months of hard work they have all put in and we look forward to representing the WCC at the National Championships!"

Derrick, who took the Zags to NCAAs last year, in his first year with the program, continued:

"This year was definitely smoother than my first and was really proud of the growth in our athletic maturity. Instead of trying to teach [and] learn a new system in the middle of COVID restrictions, we had the majority of the team that knew the expectations and how we operate, which really helped!"

"I think we gained some overall speed since this time last year, but the biggest difference was in our ability to show up and consistently bring our top speed, as opposed to hoping for a good day, on race day." 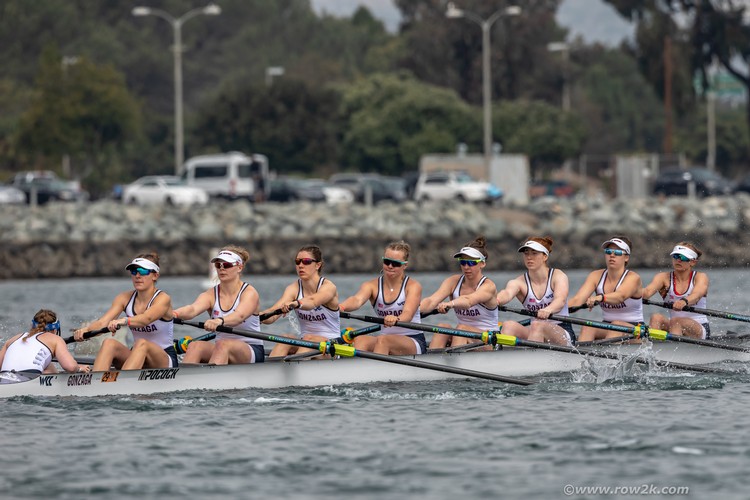 Key to this year's WCC championship was the performance of Gonzaga's top eight:

"The 1V has been the flagship this year and well deserved. They have been so consistent and aggressive and fun to coach," said Derrick, adding, "I am particularly impressed with the 4+s margin today and am happiest for our 2v8. That boat has more seniors (three) in it than any other boats and their class's attitudes and leadership this year, no matter what boat they sat in, made the team wide win today possible."

Gonzaga will find out their seed for the NCAA Championship during the NCAA D1 Selection Show on Tuesday.

The Automatic Qualifying will heat up and then wrap up tomorrow for Division 1, with seven more titles to be decided across the country. Follow all the results and catch live streams on row2k. 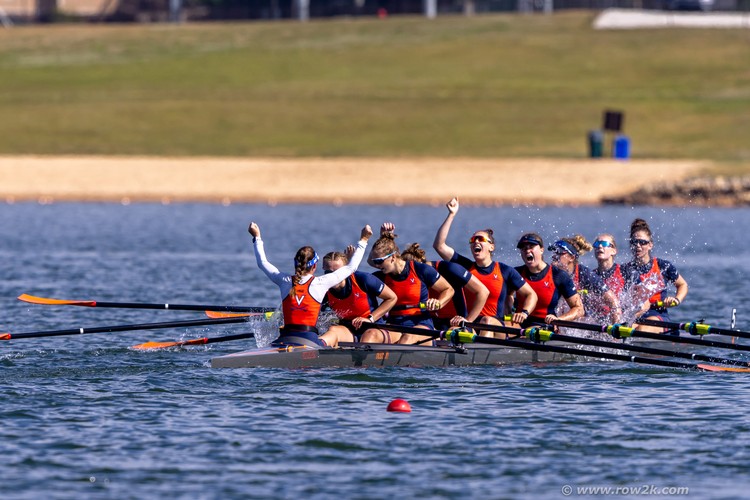