Two of the USA's best chances for the podium came down the track today with those medals well in hand, with Michelle Sechser and Molly Reckford taking silver in the Light Double and Claire Collins and Maddie Wanamaker earning bronze in the Women's Pair. All four are Tokyo Olympians, and it was the first Senior Worlds medal for both Reckford and Collins. 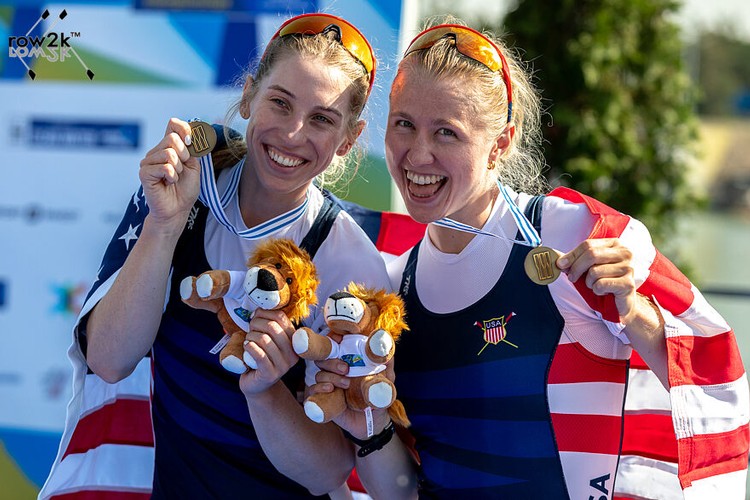 Ahead of today's final, Michelle Sechser had talked about today as a chance to revisit and redo the race she and Molly Reckford had turned in in Tokyo in just their first year together.

"A mulligan," Sechser called it, and the US Light Double made the most of their new lie, breaking away in the second 500 from the pack of crews chasing the wire-to-wire lead Great Britain grabbed at the start to win an emphatic silver.

For an event that saw margins in the tenths of seconds in Tokyo and in the early rounds here, the three seconds and change that Great Britain had over the US and the near three seconds the US had over Ireland was notable--and even the Irish had two seconds ahead of 4th place France, aka the Olympic Silver Medalists. 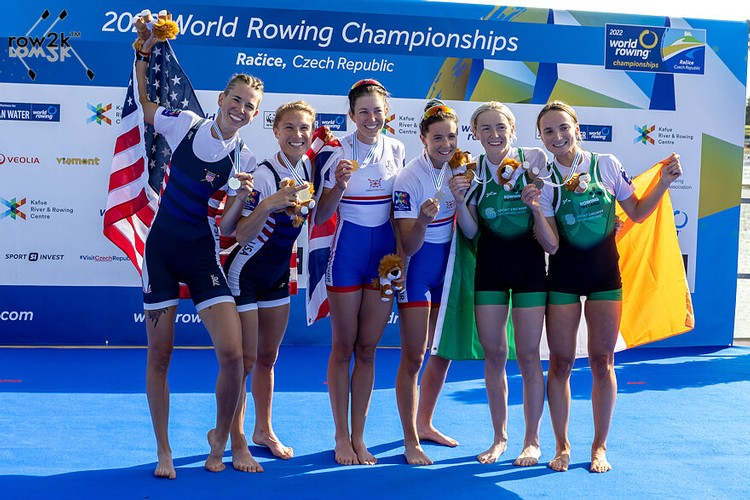 "It was really awesome today," said Sechser, "to finally get to line up a lot of the medalists from that race and have a little bit of a redemption fight.

"It's humbling. We wanted the chance to go up against the fastest in the world, women who beat us in Tokyo. And we did and they showed us their speed--that's been part of the sport, right? We found that we're much faster than Molly and I were in our Tokyo final, but we still have some room to go.

"It feels like a good place to be: we're already hungry for trying to improve some areas but immensely proud of being able to come away from last year feeling excited and confident to build--and to see a little bit of that come together today."

"The speed of the field is amazing," added Reckford. "We knew that first half was going to be crazy, everyone is going to go for it and they didn't disappoint. I always try to keep it internal. And so I didn't even look out of the gunnels until at least the 500.

"We don't feel like we did anything wrong, but we could have cleaned up the steering a little and we maybe didn't reach our exact full speed, but it's still a race that we're both very proud of. We know that there's still work to do, and that's also exciting because we don't want to be at peak speed two years before the Olympics." 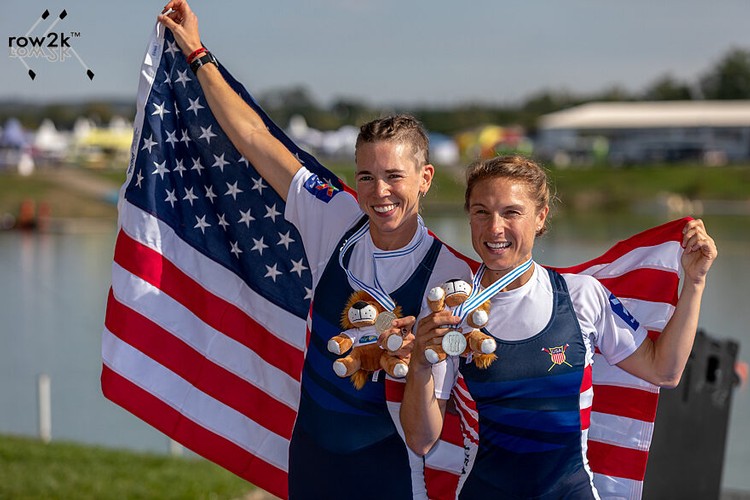 "For Molly to medal at her first Worlds in an Olympic boat class is incredible," said Sechser. "I'm so proud of her and she called a great race. The other fun part for me is, is that Imogen [Grant from GB] and Laura Tarantola from the French double, we all raced each other in singles in Plovdiv, so it's fun to make friends with your competitors in the sport and just spend so many years of your life almost growing up together. So it's really fun to experience it all."

Sechser can add this silver medal to the bronze she won in the Light Double at the 2017 Worlds, as well as the World Cup gold she and Reckford collected in Poznan earlier this season.

With the new selection procedures USRowing used this year, Claire Collins and Maddie Wanamaker put their marker down to be the pair back at NSR II is May, locked up the spot at World Cup II, and went toe-to-toe with the Olympic Champions from New Zealand today--and a talented field of that joined them in pursuit of the Kiwis. 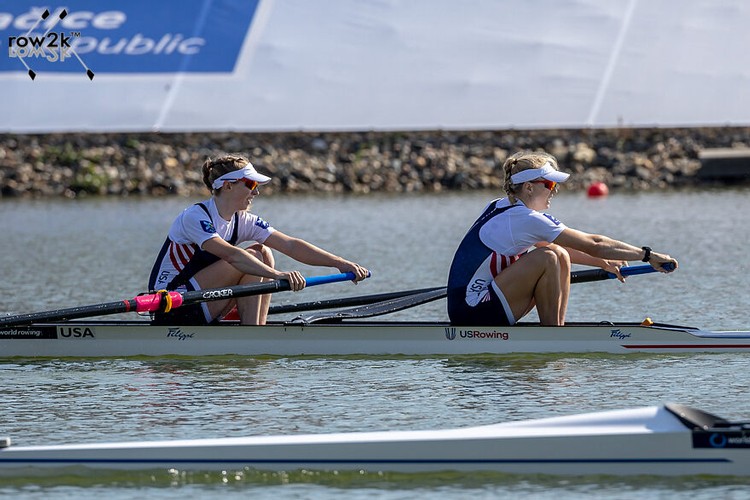 The Kiwis would win it, rowing long and flat to power away, but the US pair outlasted first Britain and then a late charge from the Romanians to get on the podium. The Dutch, sneaking through on the far side wile the Americans dealt with the Brits, took the silver. All three of the pairs behind the Kiwis will meet up again as the stern pairs of the eights racing tomorrow, as the Dutch and Romanians are doubling up just like the American pair - in the same seats, no less.

"It was great just to make this final to begin with, and to come away with a medal, it's just icing on the cake," said Wanamaker. "To be up here with Olympic medalists is great and, hopefully it's a good start for the quad.

"We've elevated our expectations for ourselves. I think we knew that we could be up there with the fastest crews, so it was less of a surprise that we were up there and more of an expectation. That got us through the middle and helped us finish ahead of the Romanians who pipped us in the semi." 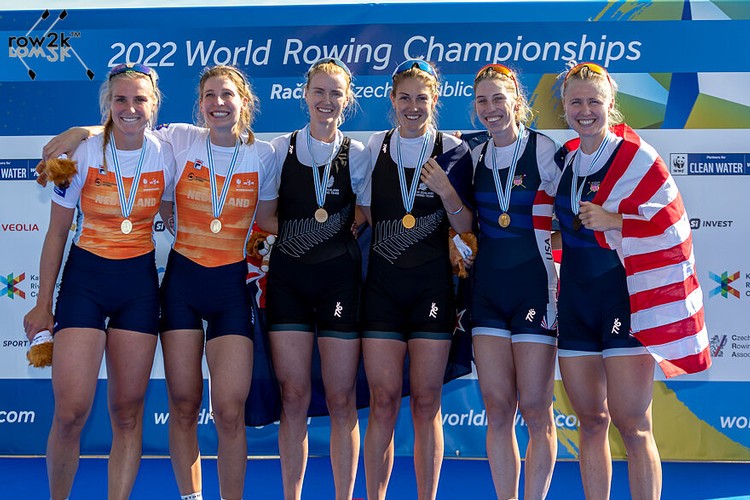 When asked about how the early pair selection might have worked in their favor this year, Wanamaker said:

"It was great to have that peace of mind. There was less of the 'Can we get through selection?' 'Are we going to make the team?' and more about 'How fast can we make this crew?' I think it was awesome as well to have the pair double into the eight because our eight broke up into pairs and every one of the girls in the eight has beaten us at some point this season. They forced us to elevate our game, to not settle for anything and always be improving.

"It was awesome to get this medal because that means that their time rowing small boats was worthwhile, and it's been awesome to row with people that I really like, and I've had a great time with Claire." 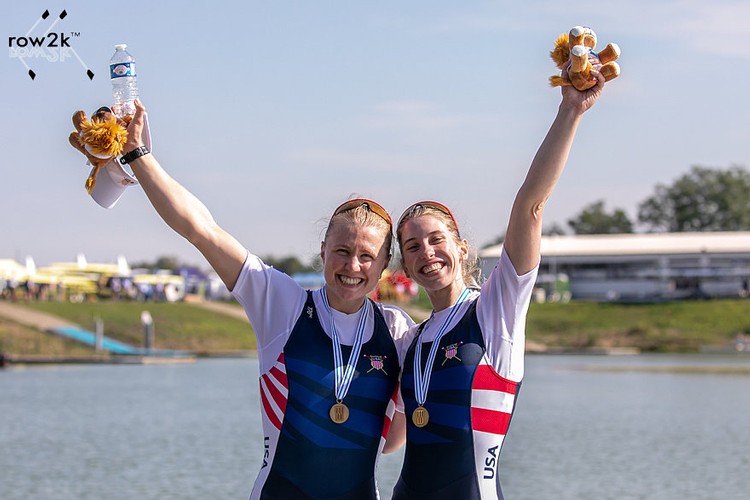 In the only other A Final for the USA, the PR3 Mixed Four finished in 5th. Coxswain Emelie Eldracher and the crew--Saige Harper, Andrew Wigren, Alex Flynn, and Molly Moore--used a strong second 500 to track down and pass the Italian four who had been just ahead of them all week in the earlier rounds.

The US B Final races today saw the Men's Pair take first, for seventh overall, the Women's Four take sixth, the Men's Four take 4th, and the Women's Quad, with spare Grace Joyce still aboard, take third. In the C Finals, the Light Men's Double rowed Austria down in the closing sprint to finish first, and the Men's Quad came 2nd to Belgium after catching the early leaders from the Czech Republic. 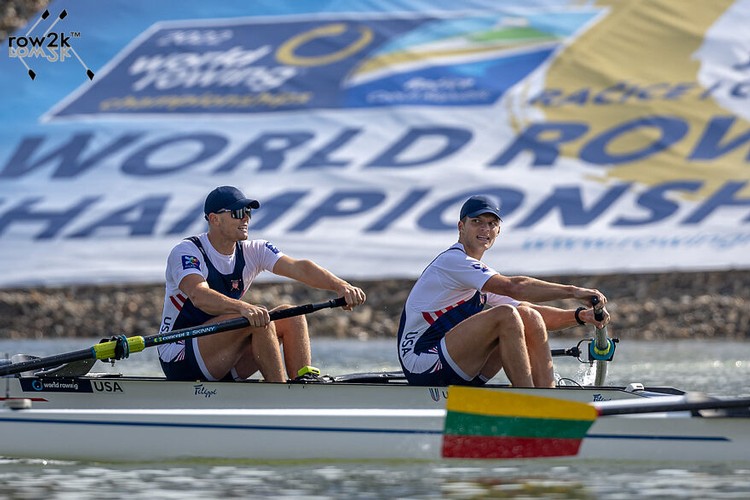 In the best of those non-medal races, the Men's pair turned their B Final into a two boat drag race with Italy on the far side of the course, and Tokyo Olympians Mike Grady and Justin Best would not be denied the B Final win. They absorbed everything the Italians threw at them and then powered into their sprint to seal the win by almost a length. It is the best finish for the USA in the pair since Charlie Cole and Glenn Ochal took 6th in 2014.

Back in 1993...: Racice last hosted the Worlds in 1993, and Ken Weinstein, who was the team manager that year, wrote in to tell us a story of Bob Jaugstetter getting his credentials caught in the front wheel out on the bike path and getting launched over the handlebars. The late Doc Hosea patched him up, and below is photo evidence: Bob in his cast and sling, with the legendary Ted Nash mimicking a karate chop. The Men's Eight this year is named for Nash, and two other members of that team are back here this year: Laurel Korholz, coaching the W2- and W8, and M. Sean Hall, coaching the LW4x. Want to "rowing geek" out on the full list? Here you go. 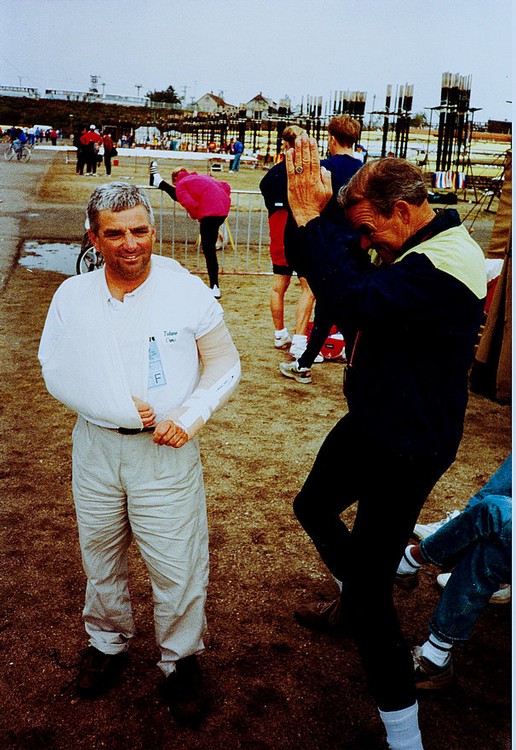 Proud Dad Moment: Raoul Rodriguez, 1988 Olympian, cheered from the stands today, watching his son race the Men's Four, much like Raoul's parents did in Seoul when he won his silver medal (as seen on the 1988 Olympic broadcast). row2k caught him for a few quick thoughts: "First of all, as a parent, to have your child row the same event you did? It's really cool. That US four are all really young guys, and I remember my first Worlds--that moment was big for me. Those guys had a great result at U23s last year, but this is a much bigger stage and the racing here, in every event, is just so aggressive. I'm just really proud--I'm a super fan."

Play it Again, Please? When the PA dropped 'Sweet Caroline' on the crowd, the Grandstand immediately started singing along...until it was cut off mid-refrain for the next race--for which the PA announcer sheepishly apologized.

Law & Order: Racice? The venue sure takes it security seriously: one guy checking credentials was wearing an NYPD shirt under his ubiquitous yellow volunteer jacket.

Head over to for the row2k International Report to catch up on the quotes, quips, and notes from all the A Finals contested on Worlds Saturday. 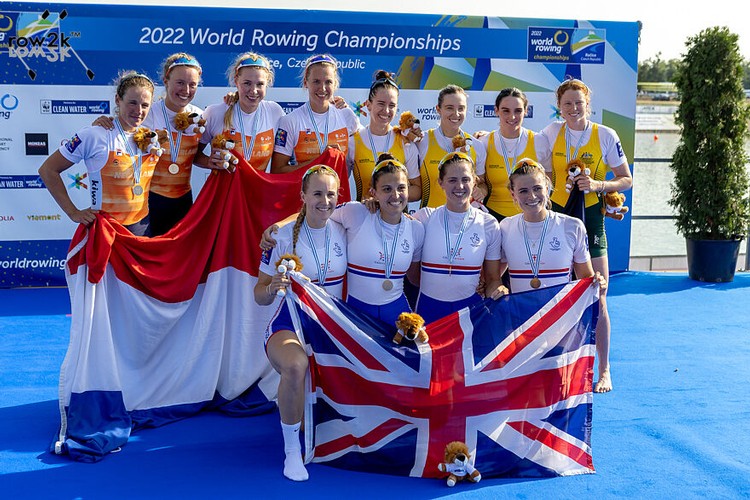 Worlds Saturday: Event by Event Report, with Quips, Quotes, and Notes to Make Your Biceps Big