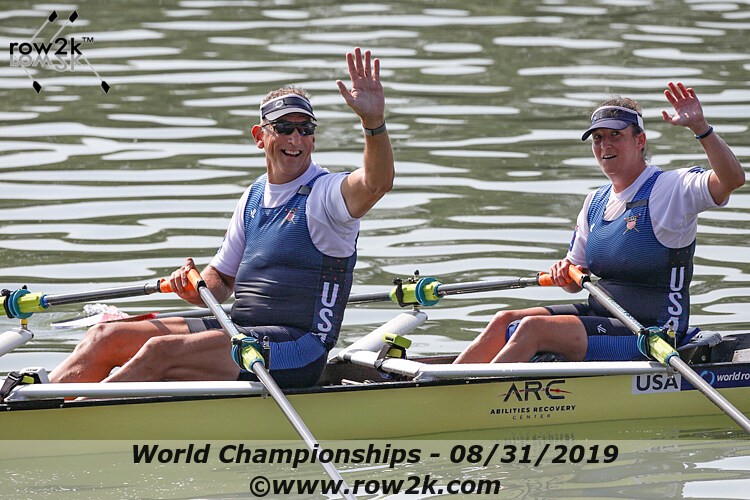 When the Final Qualification Regattas get going next spring, it’s unfortunately a good bet the US is going to be well represented.

By Friday at the 2019 World Rowing Championships, which serves as the first chance a country can qualify crews for the Tokyo Olympics and Paralympics, the US had missed qualification in five events, including the men's single, double, lightweight men's double, quad and pair.

Saturday morning, three crews raced in the B final for a last shot at avoiding a full winter of wondering if the dream of racing in the 2020 Games would actually become reality.

Of those three events, the women's light double needed to win their B final race, and the PR2 mixed para double and women's quad would need to finish no further back than second in their B finals. Having those kinds of stakes on the line led to furious racing.

It worked in favor of two crews - but the lightweight women's double will be added to the list of Olympic crews that will have to be qualified at the Final Olympic Qualification Regatta next June in Lucerne, Switzerland, to bring the total now to six boats.

Of the crews that nailed a 2020 bid, Russell Gernaat and Laura Goodkind in the mixed para double were the first to hit the mark. Even after bobbling the start and falling behind, Gernaat and Goodkind dug in and finished second to qualify their boat for Tokyo.

"I actually had kind of a crappy start for me,"Gernaat said. "I had a little trouble on the first three strokes, so the first 500 was really slow. My plan was to keep it was even as possible, not let anyone get away and then push the third 500 a little bit harder and see if we could get a decent sprint and if my lung would hold out. In the end, we came here to qualify, that was our goal, and we've done that so, I'm tickled pink happy, and happy as can be."

Goodkind was equally happy and said she was determined to not to wait until next spring to try and reach a spot on the 2020 team though the Final Paralympic Qualification Regatta in Italy next May.

"After the A/B semifinal, where we didn't make the final, I was like there is no way I'm waiting six plus months to try and qualify and live on a cliff hanger, to have it be unknown, to think is this going to happen again.

"I've had kind of similar performances like that and so it was time to set a new stage," she said.

"It was not the best start, admittedly, but around the five hundred I saw that four of us were pretty neck and neck, and I thought, I don't want to play this dodging game, this back and forth game.

"I thought, we're going to get ahead, so I started using every single ounce of energy I had matching Russell, and thinking about power application. And then around the thousand, the wind switched in our favor, and there was a head wind. Our coach calls us Ox, cause we're good in heads winds, and I saw lots of boats in our periphery start to fall behind and I knew it was our time to pull ahead.

"So, we just kept on it and gave everything we had. We qualified the boat and I'm really, really happy with our performance, and my teammate," she said.

The next qualifying B final for the US came after a cross wind forced regatta officials to reverse the order of seeded lanes.

When the racing resumed, the US women's quad ran in first place from start to finish and locked up the Tokyo qualification. Italy finished behind them and grabbed the last of the eight qualifying slots accolated to this regatta. 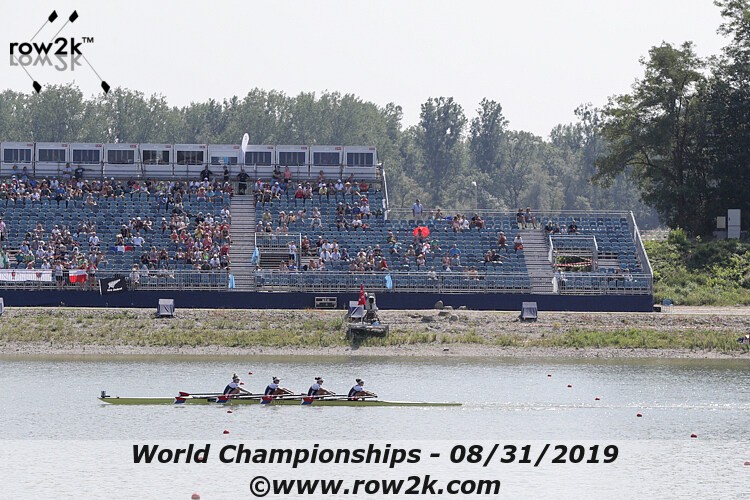 Rowing in her first senior World Championship, Kathryn Roach summed up the crew's feelings. "I'm really happy and really proud," she said. "We've been through a lot, and this is a solid step. There were many nerves, but I think we all came together and helped each other through it and we were led by an awesome coach and had an awesome support staff here at this regatta," she said.

Qualifying the boat is only the first step in what is bound to be a very long year in selection, qualification being just the first step.