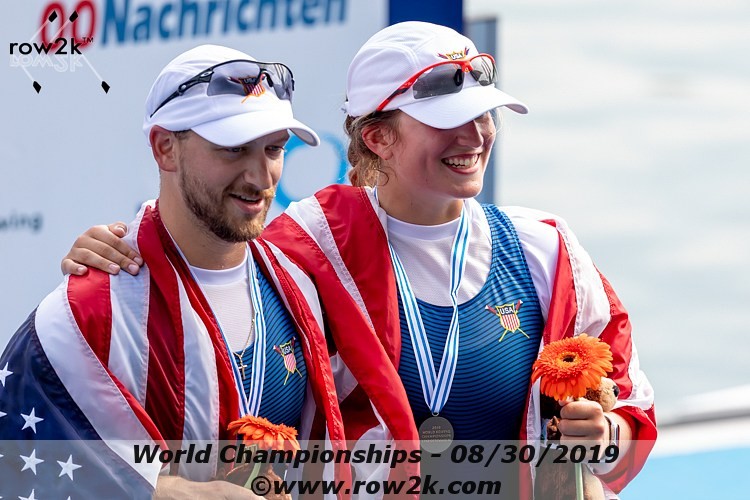 Josh Boissoneau and Pearl Outlaw with their bronze medals

Pearl Outlaw knew that something was going on behind her with her partner Josh Boissoneau in the bow seat of the US PR3 mixed double during start of their final in the World Rowing Championships Friday.

She couldn't really tell what it was. But she said just knew something happened because the plan for the start did not include rowing by herself. So for about three or four strokes, she just ignored the fact that the boat had gotten suddenly heavier than normal, and that it had slowed down.

She didn't try looking - Outlaw is mostly blind. "I had no idea what was going on," she said. "I was just trying to focus on keeping the rate nice and steady, because that's kind of my job. But I knew that something was up."

What had happened was Boissoneau had fallen off his seat somewhere in the first 20 strokes. Back home in Boston, both he and Outlaw do suspension drills, where they try to get their weight off the seat and onto the oar handles. Sometimes that can lead to a seat mishap. And that's what had happened.

But while Boissoneau was getting onto the seat, Outlaw kept racing, and her effort kept the boat moving long enough for Boissoneau to recover and get back to into the race. The result was a bronze medal, the second of three medals won by US crews on the first day of finals racing in the eight-day regatta.

In addition to the bronze medal Outlaw and Boissoneau won, the PR3 women's pair won their two-boat final against Italy and took home one of two gold medals for the US Friday. Also winning gold was the lightweight women's pair.

"I fell off my seat in our starting twenty, and I had to jump back on," Boissoneau said. "She rowed the boat for me in the three strokes it took me to get back. And then I lost my oar for a second in the last 250, and she was able to keep the boat upright and paddle us through the finish."

"I'm proud of her for keeping up with my mistakes out there today," Boissoneau said. "She held it strong. And I'm happy for our performance and our finish," he said.

"We just had to power through it," Outlaw said. "It was hard. I can't see where we are, or what's going on. The whole time I was just trying to keep the faith, and do what we were supposed to be doing. At the end, I was trying not to get my hopes up because I was not sure what we had done, I was listening for the beep. But we pulled it together and we did a good job."

The US had seven crews in the 11 contested finals, and came away with three medals, starting with the PR3 women's pair of Jaclyn Smith and Molly Moore. Rowing in an event that is still fairly new, and as yet undersubscribed, Smith and Moore raced Italy's Maryam Afgei and Greta Muti and stayed ahead from the start. 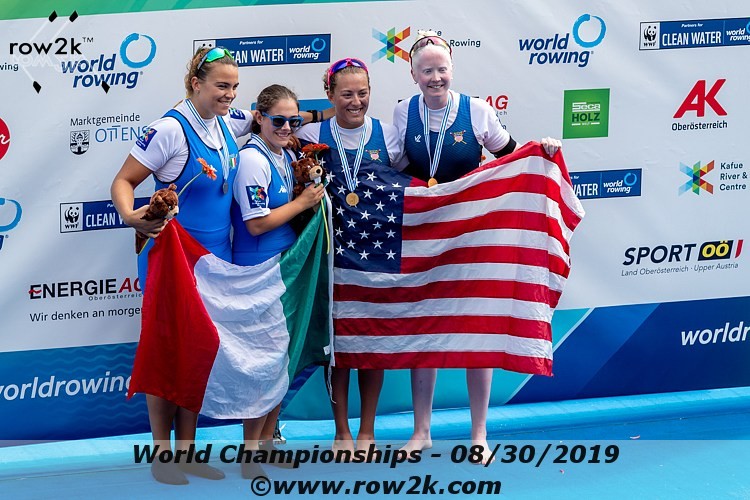 "I would say, overall, this experience has been great," said Moore. "Finally making the team, especially when the US is so deep, sending all crews on the para side, is something really special."

Smith, who raced in the boat last year and won, said she is excited to be racing a single gender para crew and is hopeful that the field will grow in size.

"When the boat became a World Championship boat last year, I wanted to race it. It's been a real goal of ours to race the pair, and be able to go out there and show the para world what we can do with a one gender crew.

"It's been really great for us, I raced it last year with Dani Hansen, and it's been a lot of fun. I just hope more nations get behind it and we get more and more competition, because it's a great boat class."

Of the medals won Friday, the most hard fought came from the women's lightweight pair of Cara Stawicki and Margaret Bertasi.

Stawicki and Bertasi trailed Italy off the start and through the first half of the race. But they pushed into the lead in the third five-hundred, and held off repeated pushes from the Italians and Germans.

A slight bobble resulting from hitting a buoy may have given the chasing boats a thought that they could close, but the US hung on and won.

"The race was great," Stawicki said. "We were behind off the line. I usually don't quite know that from stroke seat, but I felt us taking inches the whole way down so we rowed with confidence and tried to lock into rhythm. My job is to stay off the buoy line, and I did that for the most part," she said.

"The race was a great way to end our season, we wanted to come off the water having had a good piece, and we really did that. It's been an adventure getting into a sweep boat for the summer and I couldn't be more proud of the way we finished. Maybe around the 500, we hit a buoy on our side, which was fine because we're used to that," she said.

"I don't think we lost that much speed, we just picked it back up and kept going. We were not going to lose this race because of a buoy. For both of us, this is our first medal at a World Championship, and it's very exciting."

In all, the US had a largely successful day of racing in Linz-Ottensheim. Two Olympic class sculling crews, including the women's double and single, and women's para PR1 single sculler Hallie Smith, advanced into the final from the semis and reached the necessary finish to qualify their boats for the US in the Tokyo 2020 Games.

Gevvie Stone and Cicely Madden rowed into first place in the middle of their race, but were heavily challenged in the final 500-meters, were passed by Romania and France and crossed the line in third.

Still, the result moves them into the Sunday final and gains the US a slot for the boat in Tokyo. While Stone was pleased with having qualified, she was not pleased to have been surprised and passed. 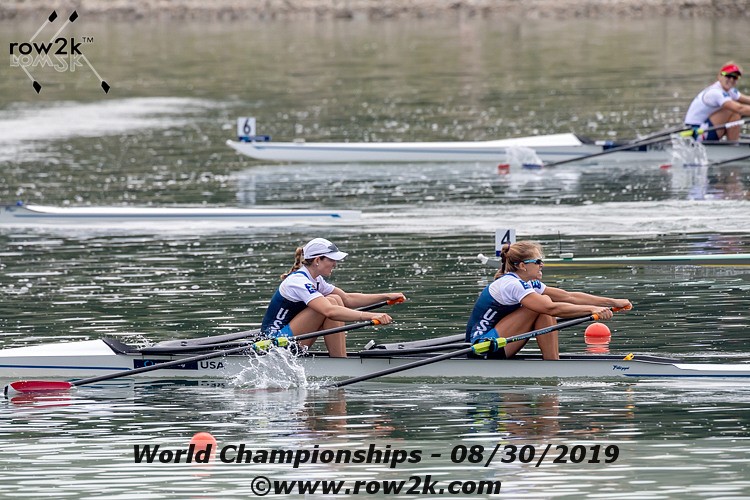 "We have high expectations for ourselves and you never want to get surprised out there, and don't want that to happen."

Behind the double, Kara Kohler, led in her single semifinal from the start to the finish. She was challenged by both Britain's Vicky Thornley, who finished second, and Switzerland's Jeannine Gmelin, who made her way through the pack from fourth into third to advance. 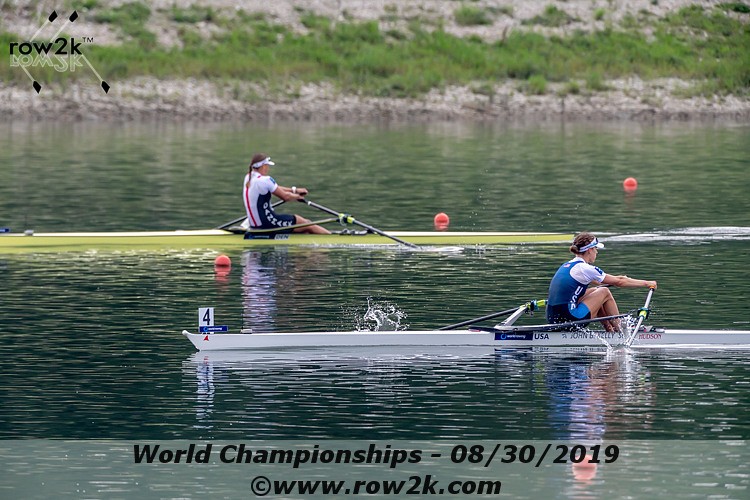 "I've been working very hard, and I'm glad that it's paying off so far," said Kohler. "The focus is on Sunday now. (Qualifying for Tokyo) was definitely something I was thinking about during that race, so I wanted to make sure I solidified qualification for Tokyo."

Having the Most Fun

Medal ceremonies can end up being among the most entertaining moments of a championship regatta. And for Friday, the nominations for most fun on the medals dock goes to the Brazilian lightweight men's pair, and Italian lightweight single sculler, Martino Goretti.

This photo requires no accompanying words. But go to the gallery to see the full celebration. 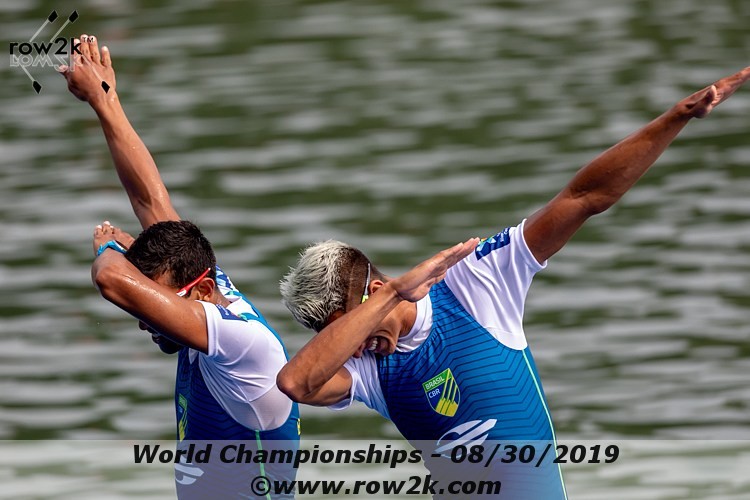 Goretti needs a little bit of a back story to understand his level of celebration. First, he said he has always had a dream of rowing in the lightweight four in the Olympics, but that ended when the four was dropped from the Games after 2016.

"When the light men's four was cancelled, I lost my Olympic dream. I thought the sport was no longer for me, then I discovered rowing in the single and realized I could still enjoy it," he said. But the season was not an easy one, and before this World Championships, Goretti decided he would retire when it ended.

Still he fought through a selection process that only ended just before the start of the regatta.

"The season was kind of tough," Goretti said. "There was a lot of selection inside my federation, and I have trained all year all alone. So I had more than one selection, the last one was 10 days ago. And so it was a tough season, I was coming here more relieved because my real World Championship was 10 days ago."

Goretti's plan was to get into first place and hold on, but he was challenged by Hungarian silver medalist Peter Galambos and bronze finisher Sean Murphy of Australia.

"I am lucky because the field is super tough, and I was absolutely not sure to be able to stay ahead of the guys who were coming back," he said.

"I was sure to be fast to the first thousand, but I was not sure I would be fast in the second thousand, so today has been my day. I think if I try out of 10 times, I don't know if the result would be the same. So, now I will cry."

Goretti was met at the awards dock by his girlfriend, who immediately handed him a well-deserved beer. 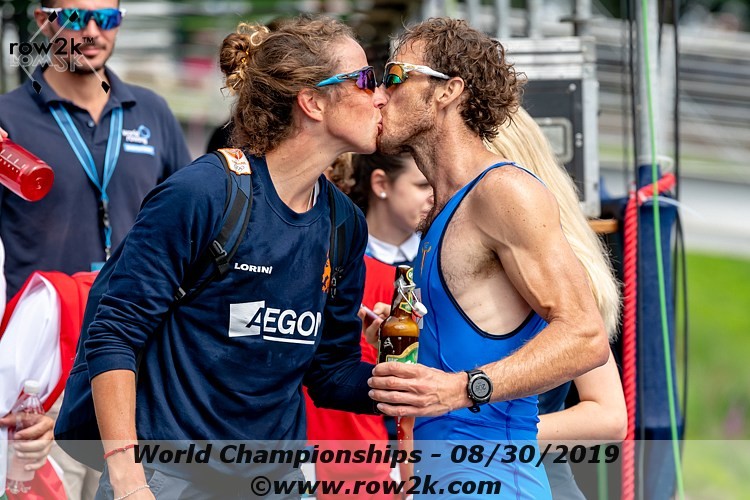 For folks watching back home, the guy in the NASCAR ad (Michaele Rooker) looks a lot like Hilary Langer.