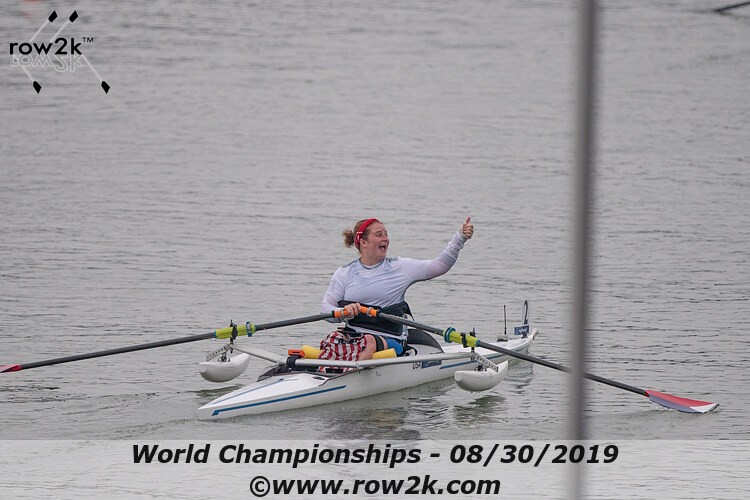 When Hallie Smith was rendered paralyzed by a rare genetic disorder five years ago, she began watching para sports and wondering if she could ever find her way to a Paralympic Games.

Smith was 21 when a deteriorating condition that had made walking difficult when she was a teenager, and then led to seizures that forced her to take a break from her studies at Smith College, finally left her paralyzed from the ribs down. She was eventually diagnosed with the rare genetic condition, Hereditary Spastic Paraplegia.

With a diagnosis, doctors could get her seizures under control and she returned to school, went to work and discovered para rowing in Washington, D.C.

Last year, Smith won a bronze medal at the World Championships in Plovdiv, Bulgaria and then began training again for this year's World Championship, and the chance to qualify the PR1 women's single for the 2020 Paralympics.

Friday, Smith made sure that her boat class would have an opportunity to race in Tokyo when she finished third in her semifinal in Linz-Ottensheim, Austria and accomplished her first goal, qualifying the boat class. She will race in the Sunday final, and not long after, she will set her sights on next year, towards the US para trials.

If she can win that, she will have achieved her dream of being a US Paralympian.

"I'm really excited," Smith said. "My big goal coming here was to qualify my boat for the Tokyo Paralympics, and I did it. It's kind of unbelievable to me.

"It's a dream come true. Since I became paralyzed a little over five years ago, I started watching para sports and getting into it and really wanting to go to the Paralympics, and now it's a possibility now that the boat is qualified.

"You can't have one without the other."

Smith was one of two para crews that have qualified boats for the 2020 Paralympics. The US mixed para coxed four qualified their boat class on Thursday and will also row in the Sunday final.

Two other crews, the PR2 mixed double, missed advancing to the final Thursday and will need to qualify in the B final Saturday. Also rowing Friday, but not advancing to the A final was PR1 men's single sculler, Blake Haxton.

Haxton finished fifth and will need to win the B final Sunday to qualify his boat class for next summer. With her boat class set for Tokyo, Smith is turning her attention to the next two days and preparing for the final.

"I've got to think about that for a couple of days, focus on the final, try to get ahead, and get a medal again before I get back to the training," she said. "It's nice to have one more race because I've enjoyed my races here a lot."