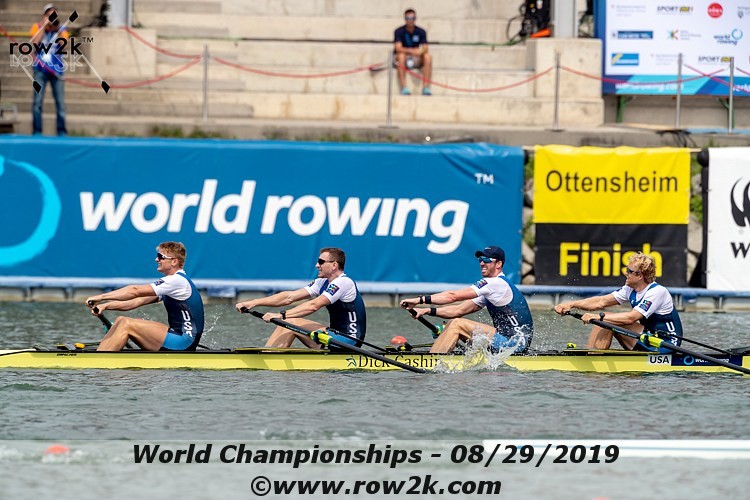 Just after the US men's four settled into a race rhythm from their starting sequence, Clark Dean took a quick glance to see where the crew was positioned in the pack. That's when he noticed Australia was next to them, and his boat was slightly ahead.

"We've had some pretty good starts in the past races," Dean said. "And with a tail wind, I thought, we're moving quick, Australia's right next to us, and we're up on them. And then I thought, we're probably up on everyone."

Then he saw he was mistaken.

"Then I kind of looked around and saw, no, we're in maybe fourth out of everyone." But there was no panic in the reaction. The plan for the race was to finish third, and qualify the boat for the 2020 Olympics. There was no place in the plan to slow down or give in.

Over the rest of the race that's what they did.

With Dean setting the pace from the stern and Tom Peszek keeping an eye on the race from the bow, the US inched forward and with about 300 meters left, Dean cranked the rate up to 44 strokes a minute, and the US passed Germany, and crossed the line in third.

Australia, which did start the race in third, finished first, followed by Poland.

With the third-place finish and spot in the A final, the four became the second crew to reach the qualification standard for their boat class, place themselves in the regatta final, and book the US a place for the 2020 Olympics in Tokyo next summer. 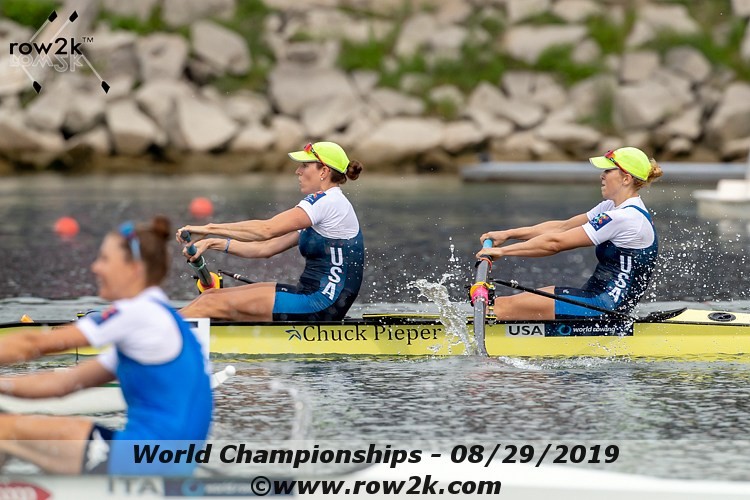 Just before them, the women's pair had done about the same thing, racing from fourth through the first half and then sprinting into second, crossing behind New Zealand and a hair ahead of third place Italy to qualify that boat for Tokyo.

By the time morning semifinals were finished Thursday at the 2019 World Rowing Championship in Linz-Ottensheim, Austria, the women's four capped the US effort in the Olympic qualification for the day by also reaching the final with a third place, semifinal result.

Of the crews that were rowing to reach a Tokyo qualification placement and move into the medal round, only the lightweight women's double finished out of the top six of the two semifinals and will have to race Friday for the only remaining qualification position left here.

There are only seven spots open for the lightweight doubles and to earn the last spot, Michelle Sechser and Christine Cavallo will need to win the B final Friday morning. Also, missing a chance to qualify for the finals, but still alive in the hunt to qualify the boat for Rio was the women's quad, which finished third in their heat.

They will need a top four finish in the Saturday B final, to lock up a spot for the boat in Tokyo.

In addition to those crews that qualified boats for Tokyo, the US para mixed four with coxswain won their semifinal, and qualified that boat for the 2020 Paralympics. One other para crew racing to reach 2020 qualification, the PR2 mixed double with Laura Goodkind and Russell Gernnaat. finished fifth in the semifinal and will need a top-two placement in the B final to qualify that boat for Tokyo.

Not racing for a place in Tokyo, but hoping to advance into the medal round of their events in the non-Olympic boat classes, both lightweight single scullers Emily Schmieg and Tyler Nase finished sixth in their semis and will race Friday in the B finals. 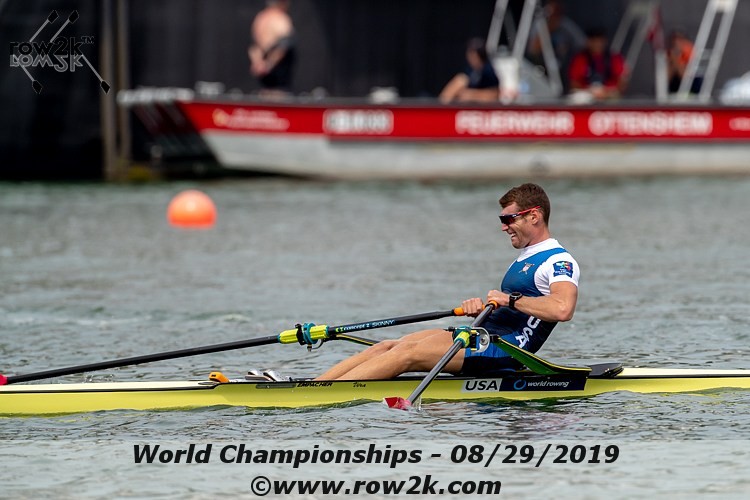 Nase, who reached the halfway point on the course in second, just could not match the moves of the boats around him, and fell into sixth.

"My whole plan was to be in the pack, and I did that and in the third five-hundred, I just didn't have an answer for the other guys," Nase said.

He was passed by the eventual winner, Mexico's Alexis Lopez Garcia, and Samuel Mottram of Great Britain who finished second, Canada's Aaron Lattimer, who led the field until the sprint, finished third.

"I gave it everything I had," Nase said. "I could have used my energy a little bit more strategically, but at the same time, if you had told me at the five-hundred you're going to be two seconds away from first place, I would say that's a pretty good spot to be in."

Having three Olympic crews, and one para crew, qualify for next summer's Olympic and Paralympic Games eases some of the pressure for the US, which had five crews in need of qualification fall out of contention in earlier racing this week.

While every crew racing wants to reach the medal stand in the final round that begins Friday, qualifying boats for Tokyo was the highest priority of business in this World Championship for 14 Olympic class, and four Paralympic, class boats.

Every boat class that misses qualification in Linz-Ottensheim this week will have to earn 2020 places at the last chance qualification regattas. For Olympic class crews that will take place in Lucerne, Switzerland in June. The Final Paralympic Qualification Regatta is held in May in Gavirate, Italy.

Thursday's efforts for the US began with the women's pair semifinal. In that race, Megan Kalmoe and Tracy Eisser rowed from fourth place at the thousand, and sprinted through Ireland and China to finish second.

New Zealand's Kerri Gowler and Grace Prendergast rowed in first from the start to win.

"We knew there would be a lot of fast starters in that heat for sure," said pairs coach Yaz Farooq. "No one took anything for granted. The Kiwi's have been strong throughout the regatta, and our goal was to make the final. We definitely prepared for the race to come down to the wire, but boy did that ever come down to the wire.

"Fortunately, they're just such experienced racers. I think that really is a great strength of theirs. I was watching from the grandstands and I saw them looking both ways, so I knew that they had a good sense for where they were in the field and it truly came down to the final strokes."

Following them was the para mixed four, that led from start to finish. With qualification behind them, they can now focus on their final. 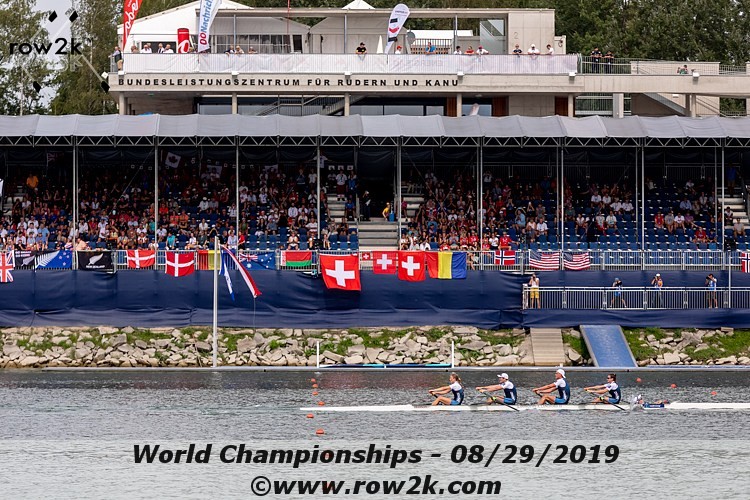 "It's a really good feeling," said two-seat Charlie Nordin. "It's an honor to qualify a US boat for the Paralympics. Thatwas one of the things we set out to do, so it feels good accomplishing it. We're still very focused on the final. We came here with the goal of winning, so that's still our main goal."

Dani Hansen, who has rowed in the boat through the last two Olympic cycles, and won silver in the 2016 Paralympics agreed that it was good to get the qualification out of the way and is now intent on trying to win the final.

"This one is done, and I feel proud of us. Over the past years, we've come a long way and I'm really looking forward to seeing what more we can get done in the final. I feel like we just need to keep our heads in the boat and see how far up we can finish," she said.

"Qualification does feel like a reliever, but I can't help thinking about the final. So, I am very much looking forward to Saturday."

Behind the para four was the men's four, and their sprint into the 2020 program.

"That hurt a little bit, but it's supposed to, I think," said Peszek. "We've had a really good couple of weeks in this boat, and we just kind of knew that every day we were going to keep working hard and keep getting a little bit faster, and it's just kind of been fun along the way.

Finishing up the day for the crews that had a chance to qualify was the women's four, which earned that boat class a place in Tokyo by rowing out of a fourth place start through the first 500 meters, and finishing third in their semifinal. 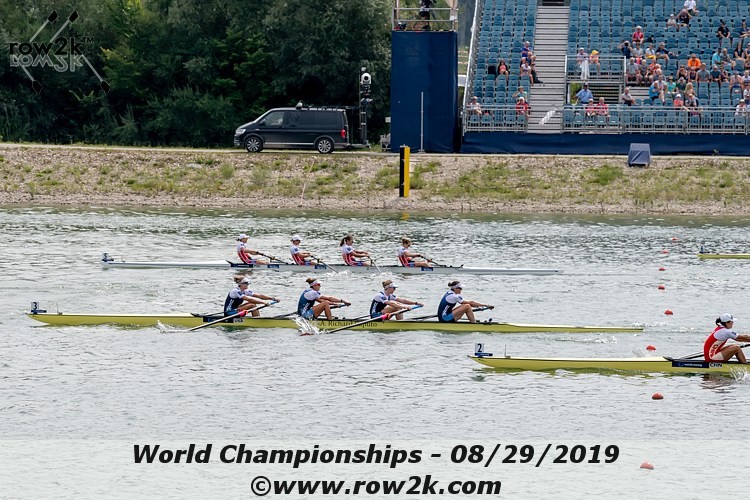 With the qualification behind them, the crew is also looking forward to a chance to win a medal. All four women noted that the qualification was the goal of the week, but were trying not let it become overwhelming.

"We were just kind of not letting the pressure be all about the qualification," said Molly Bruggeman.

"We were just trying to do our best as a crew. We knew if we do the best we can as a crew, we would be fine. And as far as improving off our heat, we knew if we had a better race than that today we would be in the top three," she said.

"I think when you're going into a semi, you know it's going to be a barn burner, and everybody obviously is going for the qualification," said Vicky Opitz.

"So, we expected it to be hot out of the gate. But we just really trusted our base, and worked on our middle section, which is what we really wanted to execute well for the semi, and we just kind of worked our way through the field," Opitz said.

With the qualification over, now it is all about racing for medals, added Caryn Davies.

"I think we're getting faster with every race, and I'm really proud of our effort today," she said. "At the five-hundred, we looked around and realized we weren't in qualifying position, and so we just got to work and got the job done.

"It's really important to qualify," she added. "So that was step one, and then now, we can move on to step two, which is racing for a medal. Pressure to get a medal is not relevant here," she said.

"That's not a pressure I'm putting on myself. Going into the final I'm thinking we have nothing to lose, so we're just going to have fun going as fast as we can."

Chinese crews are not known for being exuberant at the finish. But the Chinese men's quad broke that mold yesterday when they finished third in their semifinal, and clinched a place in the final and an Olympic qualification. See the full sequence here. 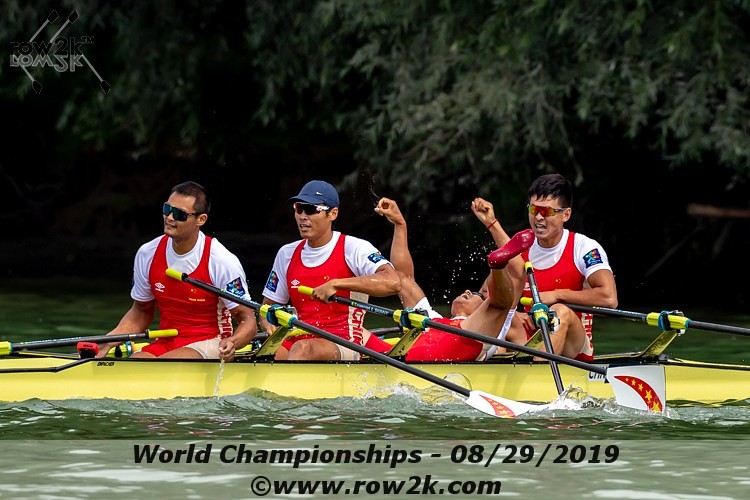 Great Britain's para mixed four with coxswain has been leading the pack in their Paralympic boat class, and are the defending Paralympic and World Champions. They set the world best time in 2017 with a 6:55.70. 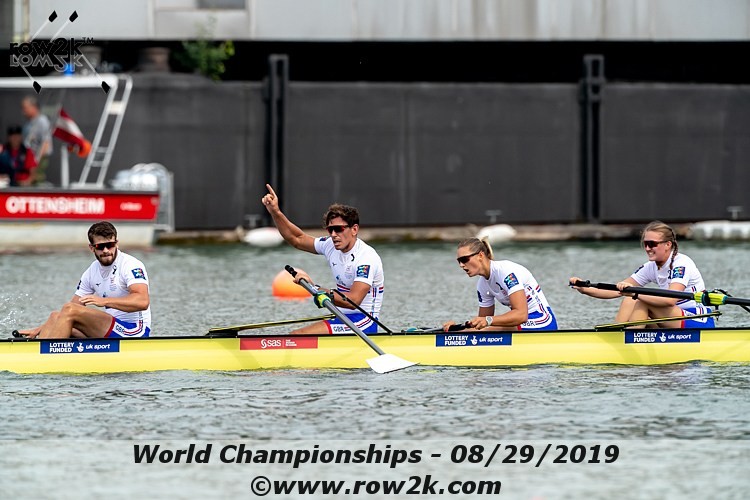