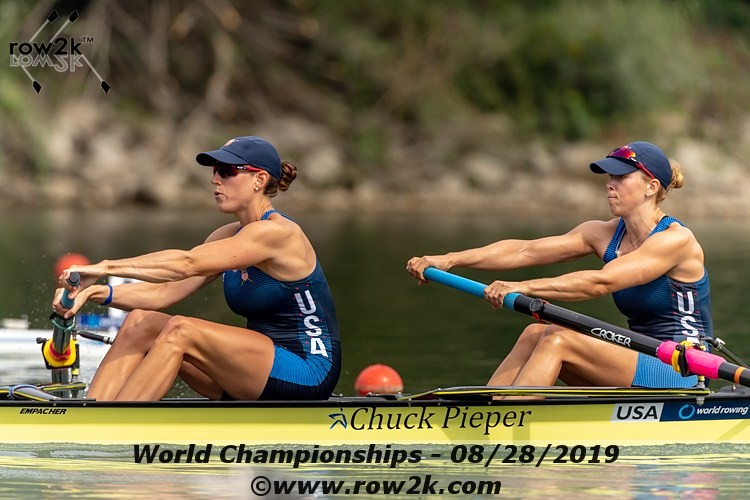 In a World Championship regatta where the stakes are higher than just who wins medals and who doesn't, by the fourth day of racing the list of athletes and crews that still have a shot at locking up a place in the coming Olympic Games begins to thin out.

For the US on Wednesday, that list dropped by four to bring the number of crews now out of the running for a direct qualification to the Tokyo Games to five, with losses for the men's single, men's double, lightweight men's double, and the men's pair in the books at the 2019 World Rowing Championships.

Additionally, lightweight men's single sculler Tyler Nase finished second in his quarterfinal to move on to the semifinal. 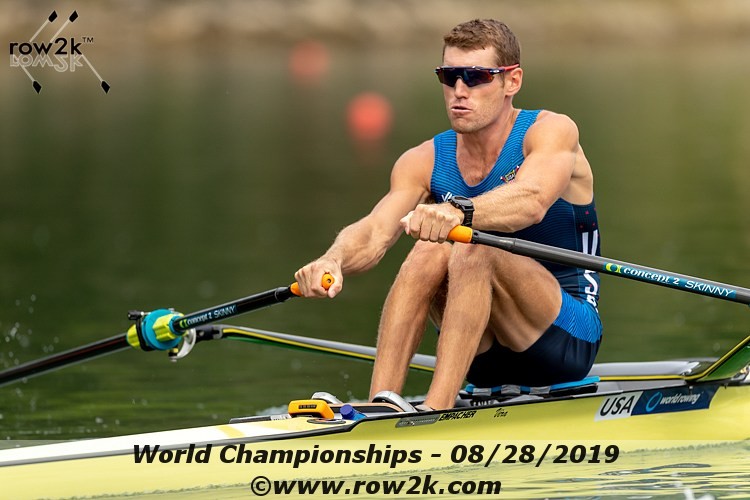 Light Women's Double
In the lightweight women's double, Michelle Sechser and Christine Cavallo finished second in their quarterfinal, and moved into the semis. In the para events, three crews advanced from the reps, and three others raced in preliminary events for lane placements in the finals.

"I feel good, and very in the moment, knowing that this is our second race of the regatta," said Cavallo. "We've been here a little over a week now, we have a race (Thursday) and we're keeping track of the big picture - the progression, the number of Olympic qualifications spots, just everything going on."

Sechser and Cavallo raced in second, behind France and well ahead of third place Romania, to advance Wednesday to the Thursday semifinal.

"We're still just learning so much about each other that the learning curve is really steep, and that makes every single time we go out really, really exciting," Cavallo said.

"There are more variables than more seasoned crews have, but there is also just lot of power, a lot of excitement and a lot of mental tenacity, that I feel very fortunate to be racing with. So it's just been, all-around, a really cool experience to go test drive out on the water." 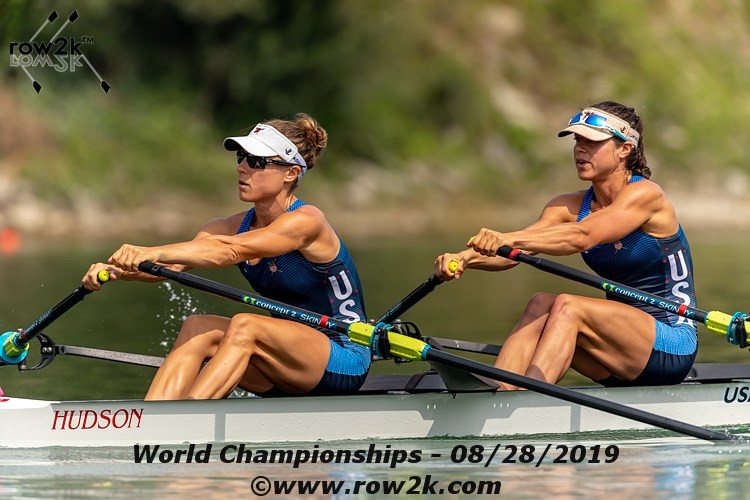 Michelle Sechser and Christine Cavallo advanced Wednesday to the semifinal

Men's Pair
If the results for the advancing Olympic class women's crews remained upbeat, it was not the case for US men's small boats. The men's pair of Anders Weiss and Ezra Carlson raced to the wire but were beaten at the line by Great Britain.

"We just lost it in the end," Weiss said. "We had a much stronger start, and a much better middle thousand, so we were just lost in the last 100 meters, we were just trying and trying, doing whatever we could to get every ounce of speed we could get out of that boat but those other crews just did a better job in the last 250," he said.

"We'll see what happens. Ezra and I came together pretty late before trials. If we get a couple of more chances to row the pair next year I think we'll go a little faster and hopefully come out in better spot."

Carlson agreed and said, "It was a tough ending. But I think we went out there and stuck to our race plan, and did the most work we could in the first fifteen hundred. After that,we just tried to empty the tank in the sprint. Unfortunately, the British outdid us. Those are good crews. The pairs are a tough field and we did our best." 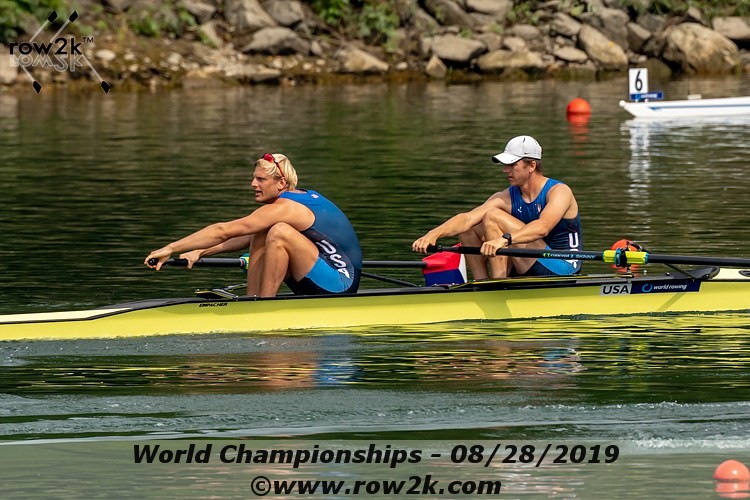 US Men's Sculling
The small boat news overall was disappointing for the US, especially for the sculling crews. On Tuesday, the men's quad was eliminated from the 2020 qualification process, and on Wednesday the men's single, double and lightweight double were also eliminated, as was the men's pair.

The bottom line result of that is if the US is going to have any sculling representation on the 2020 Olympic schedule, those crews are going to have to qualify at the Final Olympic Qualification Regatta next spring, where the limited number of available slots presents a significant challenge to making the Olympics for those crews.

In the 2016 last chance qualifier, no sculling crews made it through, and the only sculling crew racing in Rio was the lightweight men's double. Andrew Campbell, Jr. raced in that boat in the final. But he was also in the boat that failed to reach a place through final qualification for the London Olympics. 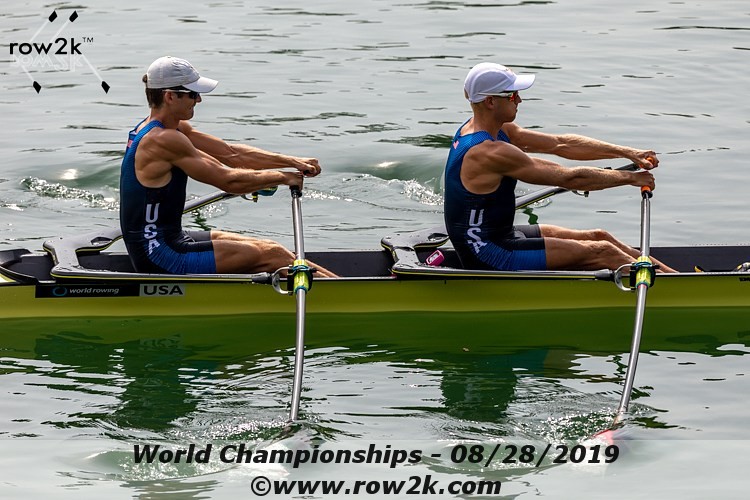 Wednesday, Campbell and Nicholas Trojan finished fifth in their quarterfinal and were dropped from qualifying contention. "We just fell behind too far at the start and from there it was just too difficult to get back in it," Campbell said. "We did a better job pacing today, but it just wasn't the piece we needed."

In the men's double, Justin Keen and Eric Frid, could not find the results they achieved from the Tuesday rep and finished sixth in their semifinal. They will race next in the C/D semifinal and have no chance of winning a slot in Tokyo this year.

Kevin Meador, who raced the men's single dramatically from behind in his Monday rep to gain a spot in the Quarterfinal, drew a brutal semi, including the defending World Champion Kjetil Borch, World Best Time holder Robbie Manson, and 2016 Olympic silver medalist Damir Martin. He finished fifth and now misses any chance to qualify. 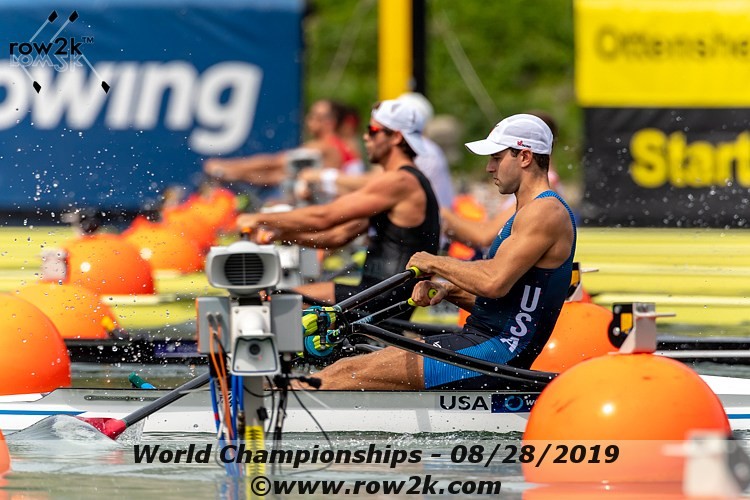 While the results are disappointing for the US team, USRowing High Performance Director Matt Imes said he believes the sculling effort in the US has been improving over this Olympic cycle and he said he has hope that some crews ultimately can advance to Tokyo.

"While I'm sure it's disappointing for the athletes at this moment, I feel the men's sculling group has really come together and made the right moves over the last couple of years," Imes said.

"The quad has been the priority for those athletes and it's improved year over year. It's a competitive boat and I think they have a great chance to focus on the final qualifier, and get the task done.

"The double and single had some good racing with some great moments. The Schuylkill Navy, and other clubs, have supported these athletes' efforts. It's not going to happen overnight but the athletes, coaches, and organizations have been working together and the results should come."

Para Events
In the para rowing events, the US has remained in the game in all events. Three crews, including the Blake Haxton in PR1 men's single, Isaac French in the PR2 single, and the PR3 men's pair all advanced to the final. Three other crews, including the PR2 women's single, the PR3 mixed double, and the PR3 women's pair all raced in preliminary races for lane placements in their finals.

For 17-year-old Madison Eberhard, Wednesday's racing in the PR2 women's single was her debut in para rowing. This is the high school senior's first year in rowing and her first international race. 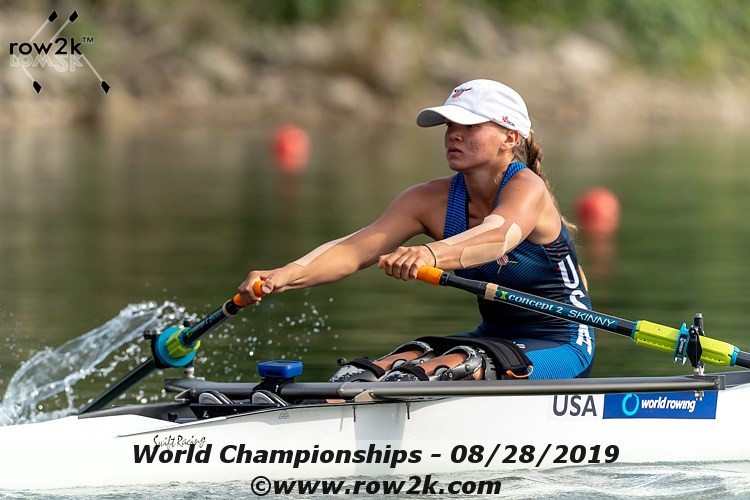 As a member of the US women's national sled hockey team, Eberhard has had plenty of experience competing on the world stage, but this is a brand new experience, and one she is hoping she can develop into a Paralympic rowing career.

"I'm really looking forward to the final on Friday," she said. "I have been really thinking about how much I am loving being here, and this sport, and the community around me. The support is great from all the people back in the US. I know they're up at 3:30 in the morning back there watching me race, so it was really good."

PR2 single sculler, Isaac French, is also a young member of the US para squad, and could end up competing with Eberhard in the Paralympic double next year. He finished easily in second, and moved into the final from his Wednesday rep. 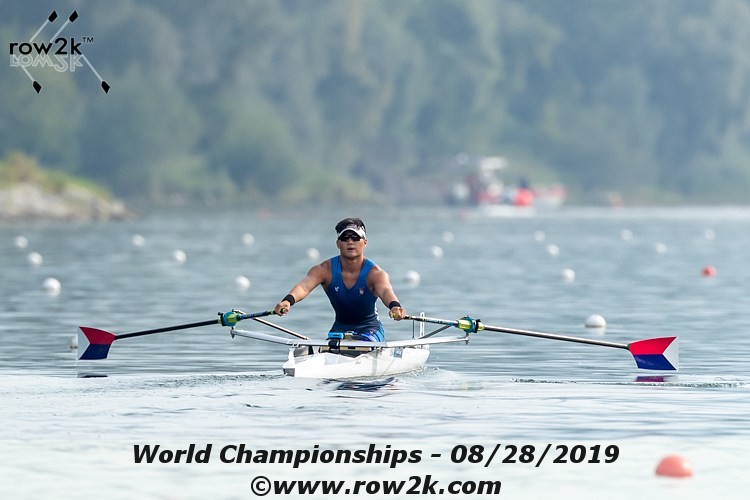 "The race felt really good," French said. "It felt good to get back on the course, and go down another time. Coming in, I just wanted to try and stay strong and stay consistent throughout the race, really work on my technique, and stay strong for the next one. I'm definitely going to try my best to recover and try to work on the race plan going into finals."

In the PR1 men's single, Haxton recovered from a hectic few weeks that included racing in two different World Championships, this regatta and last week's Canoe Sprint World Championships in Hungary. He rowed comfortably in first place in his repechage Wednesday and moved into the Friday semifinal.

"It was a much better day," Haxton said. "Much better than the heat. I did a lot of things better, executed the race much better. We had one day in the single between the canoe race and here, it was just not quite enough time, especially in the heat.

"Just kind of getting everything right in the single takes time," he said. "It still surprises me every year just how much the tolerances matter, around things like seat height, strap height. Coach told me on the dock it was a 35-second improvement from Sunday to today. I could have told you that from my speed coach. But it was a night and day difference from the heat." 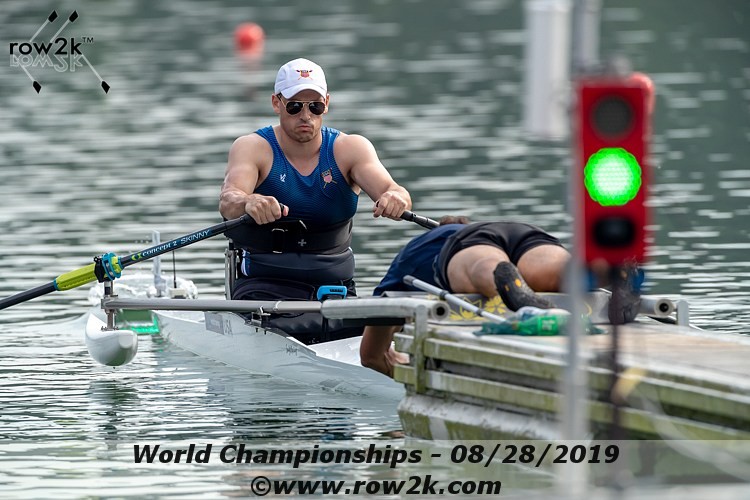 The second quarterfinal of the men's pair was re-run at the end of the day Wednesday after an official's launch apparently collided with the Polish pair during racing and snapped one of their oars.

As of late yesterday the exact details of the collision were not made know by FISA in their official communication. What is "unofficially known" is that a static referee launch collided with the Polish crew at the thousand meter point of the race.

When the oar snapped, news of the breakage was relayed to a second referee launch stationed at 1500 meters, but they were unable to stop the racing crews.

It is safe to assume there was a collective sigh of relief by everyone involved.

On Again Off Again

FISA endured a complete breakdown of its online race result posting system. It was still struggling yesterday with periodic outages.