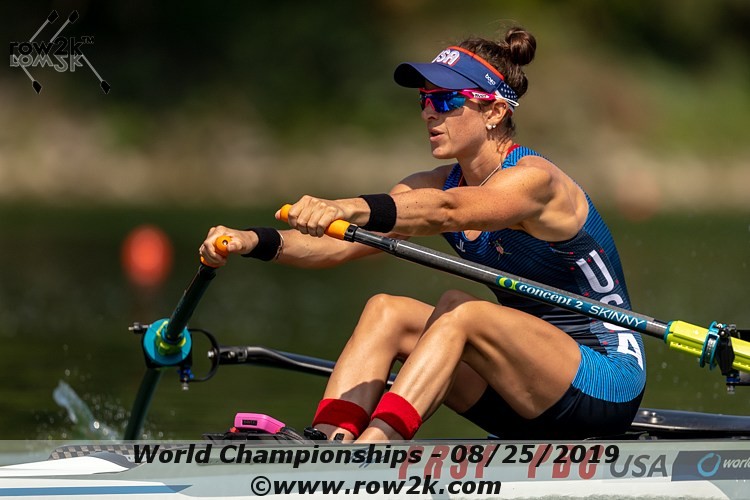 In the days leading up to the start of the 2019 World Rowing Championships in Linz-Ottensheim, Austria, the practices on the course were done mostly under cloud covered skies and in cool temperatures.

Leave it to fate for the heat that has been the hallmark of Europe's summer to make a return for the first races of the seven-day regatta.

As the process of sorting out the 521 crews from 80 different countries began, the sun bore down onto the course, and drove the heat and humidity high enough for some of the athletes to break out their cooling vests, push some to warmup in the shade of the grandstands, and a few others suffering heat related issues into the hands of the medical staff standing by.

It was hot. And it was sunny. And on top of that, a head wind that was hard to detect from the launch docks moved up the course to add to the overall strain of making it out of a first race and finishing high enough to advance and avoid an extra race, and lose the rest and recovery each crew benefits from by advancing from the heats.

Through all of that, nine of 15 US crews made a break to the next level of racing in their events, and three of them won their heats. Lightweight women's single sculler Emily Schmieg was one of those crews that advanced.

"The first thousand was really clean, and then that wind kicked up, and I just kept fighting through," said Schmieg, who rowed in the last event of the morning, just about the time that the sun hovered directly above the course.

Before the wind hit her back, Schmieg was sitting comfortably in second behind South African sculler Nicole Van Wyk, and almost three seconds ahead of Norway's Maia Lund. But then Lund went on the hunt, and Schmeig's race got even hotter as Van Wyk inched up on her.

And then she heard the voice of her coach, Matt Madigan, in her head, and from the shore.

"Norway made that big push at the end, and then it was about just dialing back into what we did at home, in the last hundred meters of every piece. That is when Matt just yells at me to go, so I could just hear that on the sideline.

"I was like, all right, we're not going to not qualify after all that. We've made it 1900 meters, we're not losing now."

Schmieg, who won a silver medal in the lightweight women's double at last year's World Championship, and has enough race experience to know what missing a direct qualification can sometimes mean, held her place, finished second and managed to avoid that extra race to advance into the semifinal.

Once off the water, she was able to relax and think about that extra time she earned.

"It was a good race, a good first one, and sort of a big step for me moving into the single," she said. "It was very challenging. I wasn't feeling so great this morning, so I just sort of had to mentally get over that hurdle, and just fall into the race.

"Now we have a little bit of extra time to recover, to keep dialing it in. I'm just looking forward to each race, and taking it one step further, executing a little bit better, a little bit cleaner, and stepping up into the semi-final - and hopefully the final."

Missing the first chance to move on directly were the lightweight men's double, men's four, men's para PR1 single, men's double, and men's single; all of these crews will race in the reps. 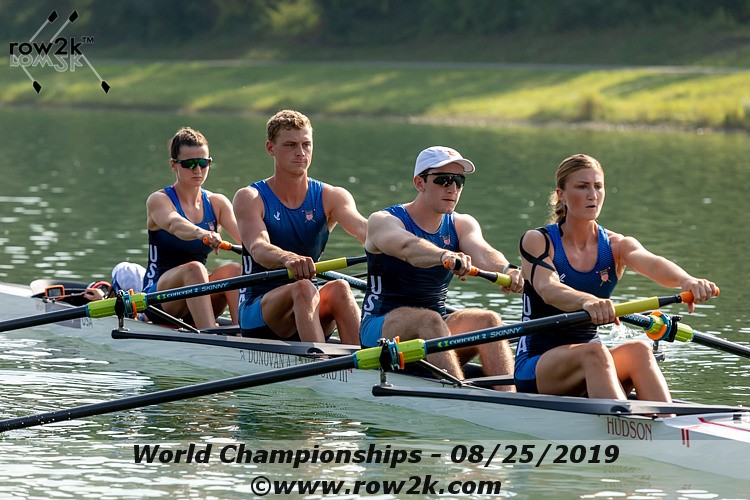 Of the crews that advanced, the first two set the stage, including the para PR2 mixed double, which advanced into the semifinal in third, followed by the PR3 mixed four with coxswain, which won their heat racing in a lineup that had to be reshuffled in the last few weeks when one of the crew withdrew.

"We executed well, and came here to do what we had to do, which was to get first in the heats so we can progress to the semifinals and skip the reps, so that was good," said bow Allie Reilly. "Getting into another race with a new lineup was good, it was our second race together as a boat, so always good to throw another one down.

"We came together pretty well, we're all pretty excited just to finally be able to race together. Our first time was in Canada (the Canadian Henley), so I think the nerves were taken care of there. We were thinking if we're going to do this, then we're all in. I don't think there were a lot of nerves about it being a new crew."

The next crews to advance were the men's and women's pairs. Tracy Eisser and Megan Kalmoe won their heat and advanced into the quarterfinal and they were followed by Anders Weiss and Ezra Carlson in the men's pair.

Weiss and Carlson spent most of the race trailing Brazil in fifth, one spot out of advancing into the quarterfinal, until they started running out of room approaching the grandstands and sprinted into fourth. 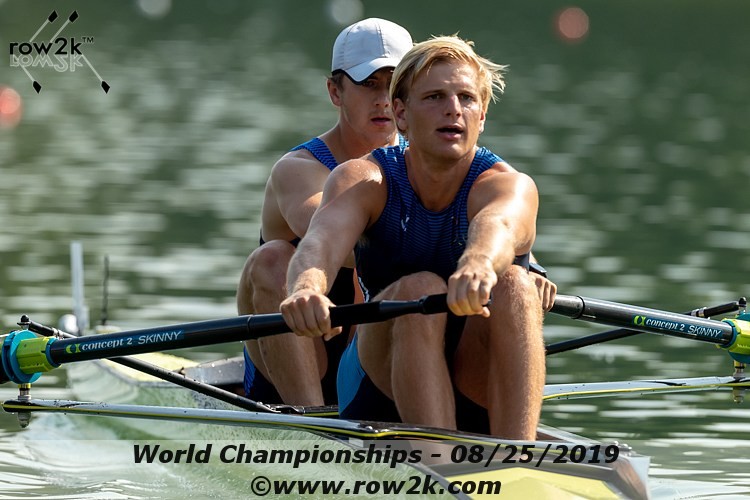 "It's always a surprise when countries you've never seen race are good," Weiss said. "Kudos to them. They were refusing to give up. Their base speed was really good, and then it was like, OK, we've got to do it to get through, without risking the reps, so we did what we had to do.

"There's always moments in the race where there is a little bit of doubt, a little bit of uncertainty, and you've just got to push through those," he said. "When those doubts come, you have to know that it is within your power to change that, and thankfully we were able to do that."

Next to race were the men's and women's lightweight doubles. The men raced in second - and advancing position - until the last 500 meters and then were passed by Portugal and Poland, and pushed into fourth, and into the reps.

The lightweight women followed them and exchanged places with Canada for second and third They finished in third and advanced to the quarterfinal.

"It was good to get the regatta started for the week," said Michelle Sechser. "And it was exciting to finally get one trip down the course knowing that's it's a long week ahead. There are a lot of rounds of racing this year in the lightweight double with quarterfinals, and we're just taking it one step at a time.

"Christine (Cavallo) and I haven't done a ton of racing together besides the World Cup, and then just the domestic trials back in May. So, there is still a pretty sharp learning curve of her and I getting to know each other and being on the same page while we're out there, so that we can really move with higher levels of synchronicity than we are used to." 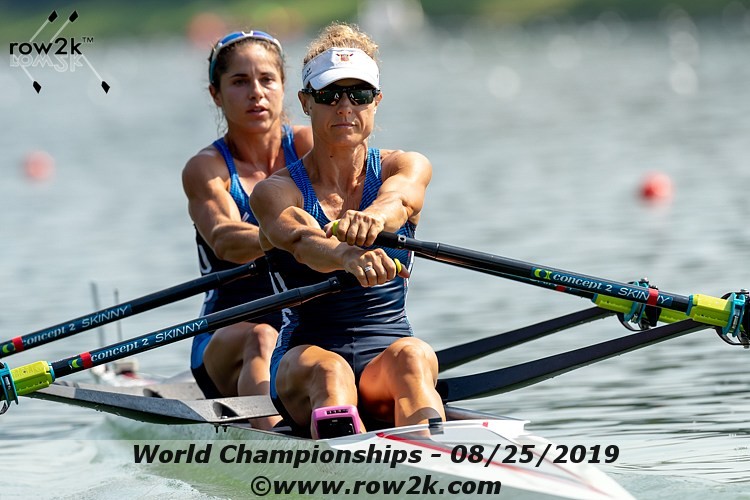 Those two set a pace that distanced them from the rest of the pack and took the first two of the three qualifying positions. 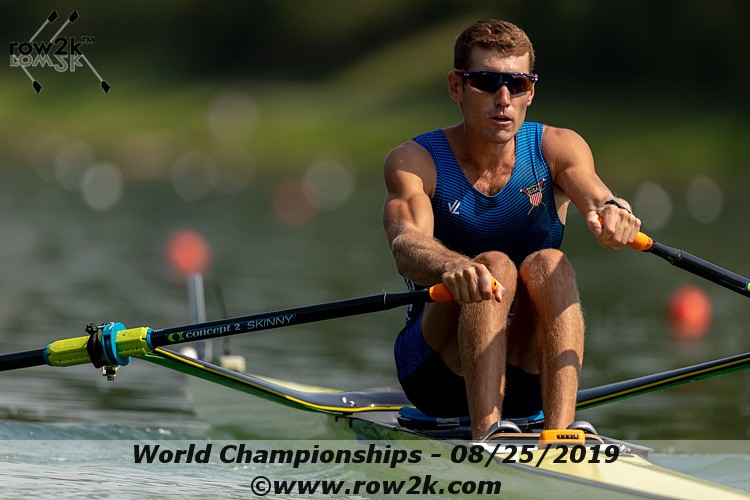 "It was good to get a race in under my belt, this was my first time in the single," Nase said. "So, I was definitely a little nervous before the start of that. The less racing and the more energy I can save only helps me further done the line.

"I really just wanted to be in the pack up until the 1k, and then try and make my move and see what happens. It seemed like the Swiss put down a pretty good pace, and I just kind of went with him to try to stay away from those guys. I'm pretty fit, and that was a good first start, so now I've just got to keep on getting better and better each race."

One crew that did not qualify, but was making their first appearance as a crew, was the men's four. Stroking that crew is Clark Dean, who is racing for the first time on the senior team and just finished his first year at Harvard.

The crew rowed out of fourth to second in the second five-hundred, but did not catch Italy, and finished second. With only one position open to a direct advancement, the US rows next in the rep.

"That was a good piece," Dean said. "That was our second 2k piece together, and so we're just getting into the swing of things. I think we can get faster every race, so it's a good first step and I think it's just going to get better every race. That's the plan." 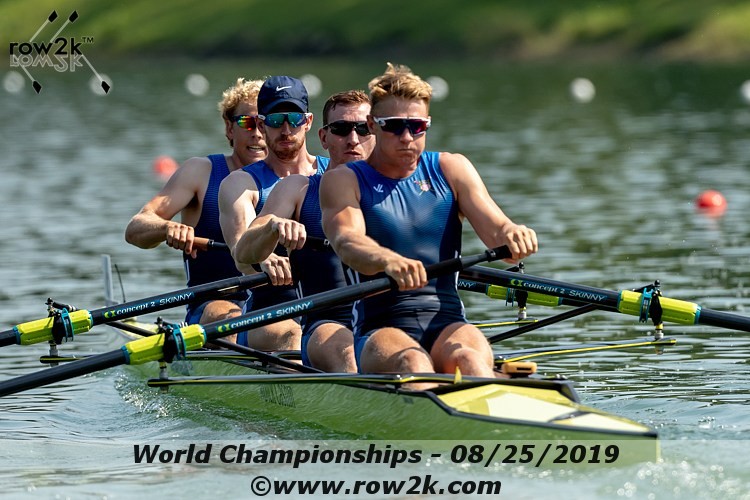 This wall mural on the side of a building in Linz begs the question - is that David Spade? The text that accompanies it is a quote from Neil Young attributed on the wall to the late Nirvana guitarist and singer, Kurt Cobain. But it looks like David Spade.

Spotted in Linz: it says it’s Kurt Cobain but that just HAS to be David Spade, right??

The row2k crew in Linz were curious, so we put it out on Instagram. The posts are highly entertaining...

We're not the only ones who are confused: David Spade confused by Kurt Cobain mural that looks like him (thanks to Princeton coach Matt Smith for the link). 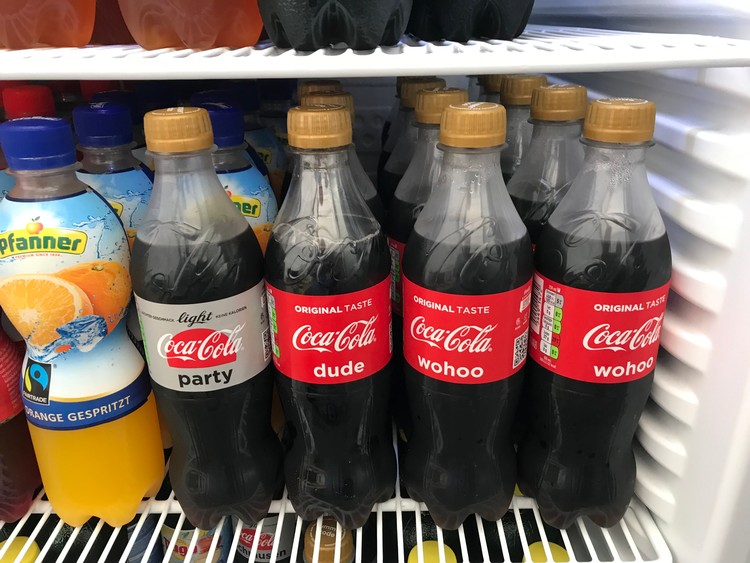 Keeping the mood on the light side the folks loading the little cooler in the media tent on the venue did their part with the refreshments. Probably unintentionally, but it got a few chuckles 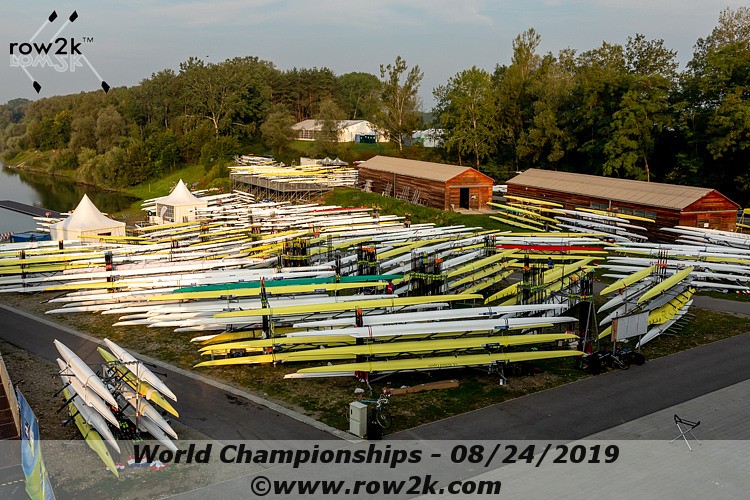 Considering that there are a record number of entries - some 1,200 athletes from 80 countries competing in Linz-Ottensheim, and the venue boatyard is tiny, finding space for all the equipment is tricky.

Speaking of the boatyard.

Overheard on the course: The sound of power tools earlier in the day making sure that the racks in these tight space don't keep dropping boats.

Word is the US women's eight fell off its rack over night earlier in the week and dropped onto the Canadian women's eight. Sometime overnight Saturday, a German eight fell on an Italian eight. Apparently, all the equipment is OK.