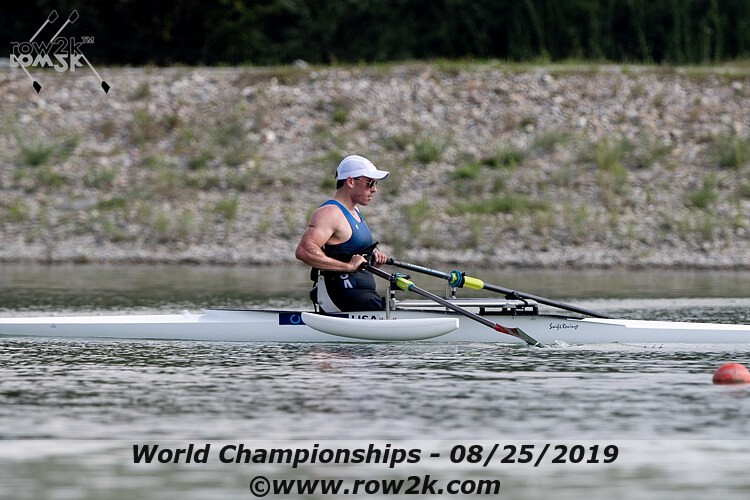 Blake Haxton finishing second in his heat Sunday in Linz-Ottensheim

Most of the crews that began racing Sunday in the 2019 World Rowing Championships were in town for up to a week ahead of time, practicing and getting familiar with the Linz-Ottensheim .race course

Until Friday afternoon, Haxton was in Szeged, Hungary, racing in the Canoe Sprints World Championships. Haxton, who finished 12 of 19 there, was trying to earn a qualifying spot in 2020 Paralympics in the new Paralympic sport that was added to the Tokyo program after the 2016 Games.

He missed qualifying for one of the six spots available at that event, and then hustled over to Austria for a quick row on the course Saturday, and was back in his PR1 single and ready to start his push for a second Paralympic bid in the single.

Sunday, Haxton raced in his opening heat in this World Championship and finished second in his heat. Haxton needs to place in the top seven of the 23 other PR1 singles that are hoping to grab one of the seven qualifying spots this week in Linz-Ottensheim.

In finishing second, Haxton missed moving directly into the semifinal of his event and will row again in the reps.

For now, while he is still fighting to move on and qualify for his second Paralympic Games in rowing, Haxton, who rowed to a fourth-place finish in Rio in 2016, is feeling confident that he can get a spot here, and then go to the Final Paralympic Qualification Regatta next May in Duisburg, Germany, and earn another 2020 Paralympic bid.

The two sports will be contested on the same course in Tokyo, and canoe takes place the week after rowing, so logistically, it is possible, Haxton said.

While Haxton is quick to recognize how difficult it is rowing in back-to-back World Championships in two different sports, with just about a day of lag time between them, he said before racing that it was not as taxing as it sounded.

"It's been a very quick turnaround," he said. "I only had one practice day before the heat, but I feel good. The canoe race is 200 meters, or about 55 seconds, so there isn't the compounding sort of exhaustion that comes with rowing.

"And it went better than I expected," he said. "There were 6 qualifying spots, with 4 spots up for grabs at the last chance next May and I finished 12 out of 16. But there is also a rule that while you can have multiple entries in canoe sprint at the world championships, there is only one slot per country for the Paralympics.

"I was beaten by two Hungarians, and two Russians, so if I can stay where I am, or improve by next spring I'll be in qualifying position. So, I'm going to try. They added the sprint canoe to the Tokyo line-up two years ago, and it looked similar enough to rowing I thought I might have a chance.

"I was a little sloppy in the (rowing) heat today," he said. "I could have been a sharper off the start. But it was not too bad, all things considered. As far as I can tell, it's mostly the same field we've seen the last two or three years, no I don't think we'll see any surprises.

"Qualifying is down to seven instead of eight like the last go around, so there is a little more intensity, a little more pressure, but it should be good. I'm looking forward to getting through the rest of the week.

And as far as training and competing in two Paralympic events in the same year, Haxton said this is going to be the biggest hurdle.

"These two weeks is going to be the hardest part. None of the other regattas overlap. They are not even close to each other until the Paralympics, in which they are separate and follow each other, and the canoeing comes second," he said.

"If we can get through these two weeks, we should be OK."