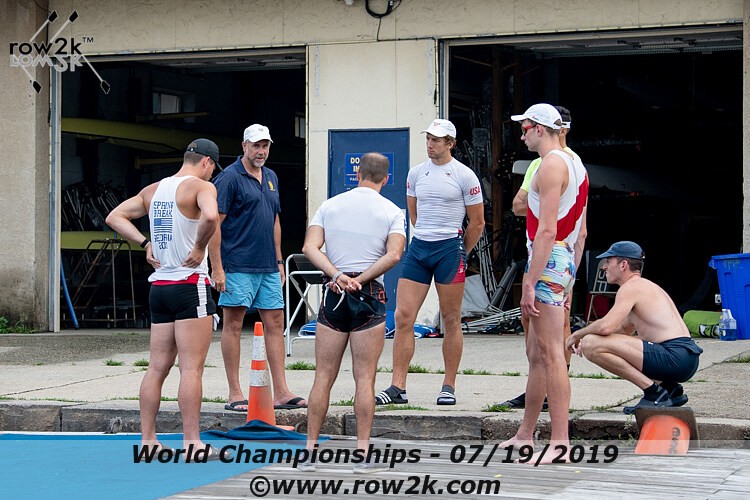 The air hovering over the Schuylkill River early last Thursday morning was thick enough to be called a fog, though it wasn't really. It was just typical mid-July, Philadelphia humidity, super-fueled by a drenching rain the day before that also loaded the river with an extra level of tree-limb filled, rushing brown water.

The dock at Penn AC had so much dead wood lodged under the old wooden planks, and between the river silt that has built up over the last several years, that it was buckled in the middle, where it is nailed down and covered over with newer planks to minimize the damage.

Upstairs in the locker room of the storied Boathouse Row club, the air felt even thicker than what was hanging over the river, and it clung to everything, glistening on the old metal weights, the squat rack in the center of the room, and on the dozens of framed pictures of international crews from past Penn AC seasons.

The tightly packed space barely fit the dozen or so large men who were pulling on rowing clothes that looked as damp as everything else, some that had been drying on wooden locker doors from the evening before, many that added to the overall smell of hard work and summer in the room.

Everything about the hot, damp humid morning that was, according to the weather reports, going to get hotter by the hour and reach temperatures nearing 100 degrees, said turn around and go home, this is not a day for rowing.

But it was, especially at Penn AC, where two crews were counting on every row left between that morning and the morning they will began racing at the 2019 World Rowing Championships in the men's double and quad. It was just as important for four other scullers who were pushing off in singles, thinking about what it would take at the upcoming final senior trials on Mercer Lake to win the open spot for the men's single.

There was a clear sense of purpose on the dock, as intense as the coming heat, and thick as the humidity in the air.

Penn AC, since the start of the 2020 Olympic cycle in 2017, has been a central part of an effort on boathouse row among the clubs that are part of the Schuylkill Navy to attract, train and house competitive scullers who might be able to change the direction of men's sculling in the US from one of struggling to just qualify Olympic boats, let alone contend for a place on the podium, to one where medals are a possibility.

The numbers of potential athletes to fill those boats has been building in Philadelphia over the past three summers, drawn in from other sculling clubs because, for this cycle at least, Philadelphia has the best situation for a sculler aspiring to make an Olympic class crew. 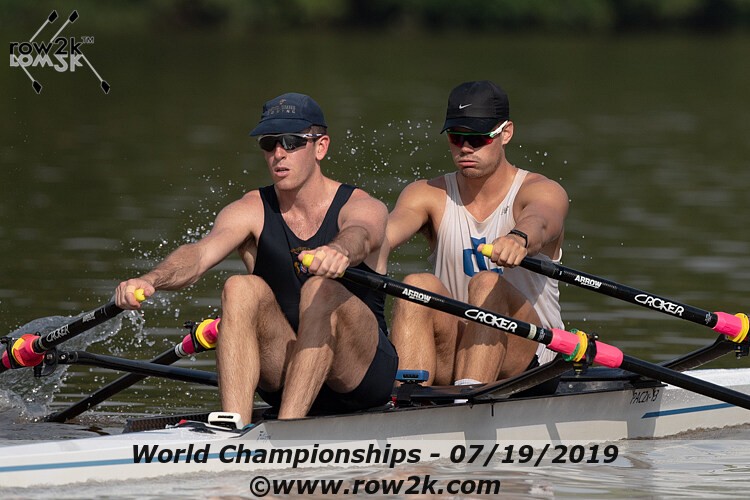 Erik Frid and Justin Kean will row the double at worlds

"It's definitely been interesting," said Erik Frid, who with Justin Keen, won his place in the double that will race in Linz, Austria at the 2019 World Rowing Championships next month. "We have a really great group of guys, which definitely energizes everybody, a lot of scullers.

"We have a lot more depth than in past years, and the rowing community here is really supportive, which is a big plus, and I think one of the biggest reasons we are all here. The river is a bit of a struggle today, but it is really great to be out rowing in a city like this."

Having crews win at trials and race for the US at World Championships is not a new thing for Penn AC, or Philadelphia's Boathouse Row. Before the men's four became a camp boat, Penn AC, particularly under Ted Nash, produced several years of World Championship, and Olympic caliber crews. But it has been some time since a group this large was standing on the old buckling dock, headed to a Worlds.

It is not the first time during this Olympic cycle that Penn AC and the Schuylkill Navy High Performance collaboration, formed after the Rio Olympic cycle - an Olympics that did not have a single US heavy men's sculling crew entered - has produced the last two US men's quads.

But as Sean Hall, the Penn AC head coach put it, "Technically we had boats in the last two World Championships, they were largely uncontested, so we were just filling slots. But really, the idea of the program was to build up to something where we can perform at the Olympics, so it's been a building process all along." 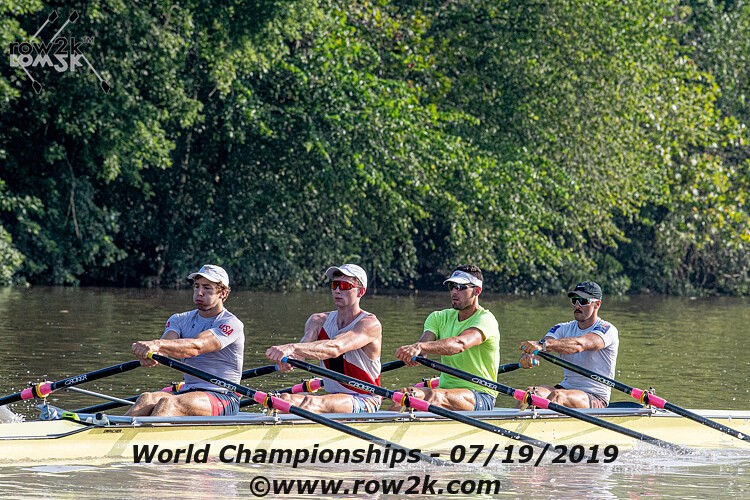 This summer, Hall contends, his program is getting close to that goal. The group is larger, deeper in talent, and competition for the seats in the crews has been higher and more intense than in any time of the last two seasons. Of the 43 singles that raced in the men's single trials in Sarasota, Florida this April, four of the eight athletes in the semifinals were Penn AC scullers.

The winner was Michael Knippen, who is now in the Penn AC quad that won the 2019 trials. For Penn AC, the single trials were part of the quad selection process. And when he made it into the quad, and the quad won trials, Knippen declined the single, which has resulted in it being included in the last US trails that will be contested August 5-7 on Mercer Lake.

The second-place finisher at the single trials was Gregory Ansolabehere, who is also in the quad. So is Craftsbury's John Graves, one of the top US men's scullers in the country the last several years. Graves was eliminated from the trials in the semifinal. He made his way down to Penn AC and is now in the bow of the quad headed to Worlds.

Penn AC has clearly been building and attracting the best men's scullers in the country. Four of the five scullers entered in the upcoming singles trials are from Penn AC. A fifth Philadelphia sculler is expected to be entered from nearby Vesper Boat Club.

Hall is proud of the accomplishment. But he also knows that this year is the big test.

The third World Championships of an Olympic cycle is where countries have their first chance to qualify crews for the Olympic games. In the 2015 qualifying year, the men's single, double and quad all failed to qualify. That opened the door for crews to go to the last chance Olympic qualifier in Lucerne, Switzerland, in 2016.

And again, all three crews failed.

Hall knows, as do the athletes, that the US rowing community is watching closely. If the Penn AC quad can finish in the top eight and qualify, then the Penn AC, Schuylkill Navy project has succeeded its first biggest mission - to get a crew to the Games. If the double also qualifies with a top 11 finish, call it icing.

Should they not qualify, the typical migration of athletes to the next best location is likely to begin again.

"I try not to think about that," Hall said. "But I feel like it is the big test. I feel like there is a bit of a, I don't want to say magnifying glass, but people are watching to see if this does pass muster. This is obviously a very important year.

"Qualifying this event could literately make the program, not qualifying it could easily break it. By that I mean, it would just go back to the same situation, with groups of guys just swinging from place, to place, to place again which is not a solution to the problem. So, there is a little bit of pressure on these guys to perform, and on me to get them there. But I think we're on the right track with that." 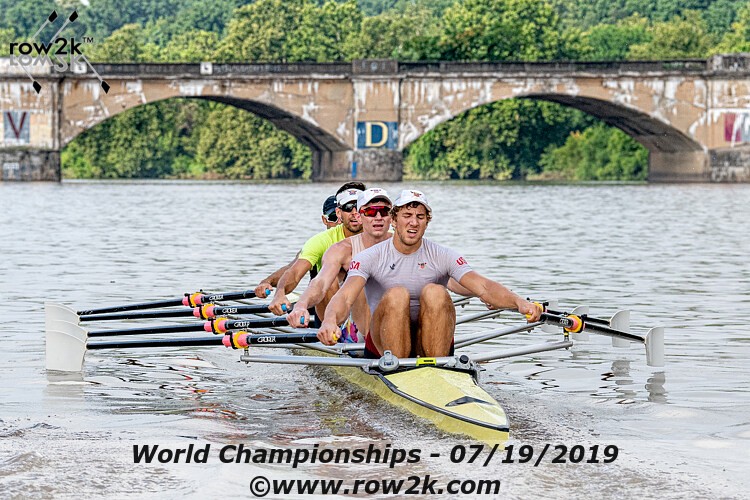 The guys in the boats are also aware of the stakes. But they are feeling like they are in the best place to be for a chance at rowing in Tokyo in 2020.

While qualifying a crew does not lock that specific group into the Olympic slot, with the support they are getting from Penn AC, and from the Schuylkill Navy in Philadelphia, it's a pretty solid bet that the Olympic crew will come from the Penn AC group.

"It's great rowing here," Knippen said. "It's been building all throughout the quadrennial, and guys have been working hard improving here every year, and I think we're heading in the right direction going into 2020. It feels like there is a lot more flexibility, and collaboration, to this.

"But this year absolutely feels like it's a test," he said. "I feel like we picked up this year where we ended last year. There wasn't any movement backwards, which was good and we've had more time together as a group. The stress of the summer is definitely picking up, but we've handled it well. And we're showing up every day, and handling it well."