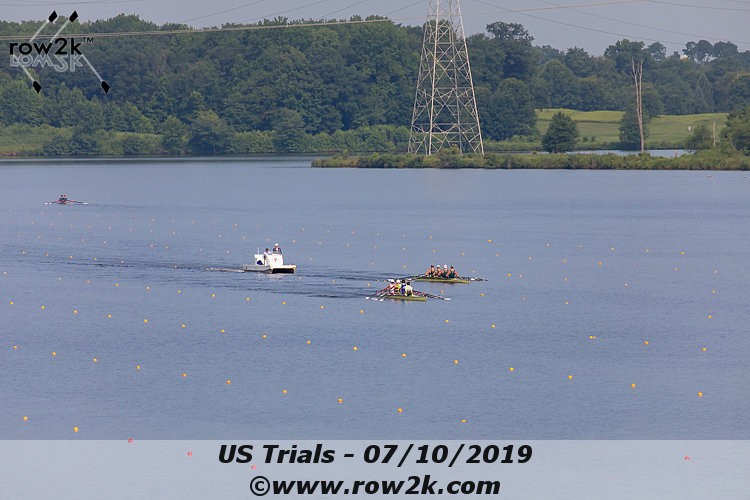 Just one more US Trial to go on this year

When the first US national team selection regatta ended in Sarasota, Florida, this spring, the athletes who won their events and cemented their places on the 2019 World Championship roster left other athletes making decisions they had not considered before the year began.

One of those athletes was John Graves.

After learning that Ben Davison, his doubles partner for the prior two seasons, was going to go to the senior men's sweep team camp, Graves chose to try for the men's single. But the trials did not go well. Seattle Rowing Center's Michael Knippen won, and accepted the nomination to the US squad for the 2019 World Championship.

Graves made the best move he saw in front of him to continue his dream of rowing in this year's World Championship, and possibly the 2020 Olympics, and he moved to Philadelphia to join the sculling group at Penn AC, where he hoped to earn a spot in the men's quad.

With the largest, and strongest, group of men's heavyweight scullers all at Penn AC this summer, Knippen also went to Philadelphia. Seems what he really was hoping for all along was a seat in the men's quad as well.

This week, with the conclusion of US triple trial on Mercer Lake, an event during which 28 individual crews were named to the three US teams that will row in World Championships around the world this summer - Junior Worlds in Tokyo, Japan, U23 Worlds in Sarasota, Florida, and senior Worlds in Linz, Austria - some athletes that missed securing spots they started the year hoping for, were in different crews.

Graves, along with the five other Penn AC athletes, won seats in two crews, the men's double and men's quad. One of those five other athletes is Knippen, who along with Graves, won trials in the quad, and were named to that crew. 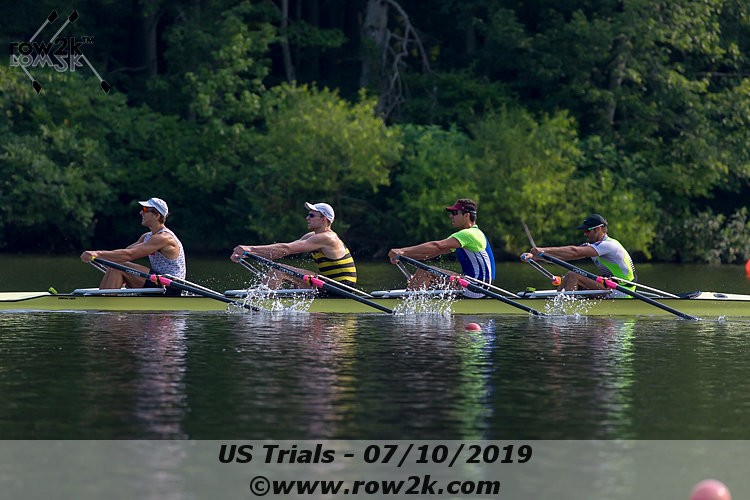 Knippen then handed back his singles slot, which is now up for grabs for whoever shows up to Mercer Lake for at the final senior national team trials that is set to begin in just about three weeks, on August 4.

"It’s been exciting to say the least," said Knippen of his back-and-forth spring and final move to the men's quad.

"The quad combines the technical aspects of the single, the speed of an eight, and teammates, which all make it a lot of fun," he said.

With having the largest of the US trials completed this week, all that remains for the U23 and Junior Worlds teams are the announcements for the camp boats. For the senior squad, there is also team boat naming to come soon. But there is also one more trials. 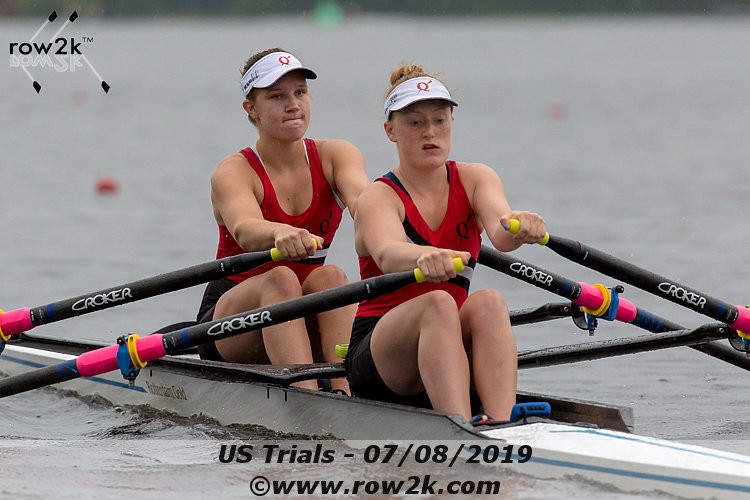 The junior team camp selections are expected to be announced for the, men's and women's eights, fours with coxswain, fours and women quads.

Junior crews racing at trials needed to earn their selection to the junior team, by winning two of three races. In the women's doubles, Y Quad Cities' Delaney Evans and Taylor English won both their first two races on Monday, and were named to the team that will compete in Tokyo.

"The two of us are so honored to represent such an amazing country," said Evans "This has been a goal of ours for a long time, and being named to the team this week is one step closer to our ultimate goal. Our trial races gave us a chance to work on things in certain parts of the race, and compete against talented teams from around the country.

"Although we are very excited, there is still lots of work to be done before leaving for Tokyo," she said. "Racing the best doubles from each country multiple days in a row will be challenging, but the two of us are ready to give it everything we have."

The men's junior doubles needed to go the full three races with Redwood Scullers' Itai Almogy and Rhys Krappe winning the first race, and then Saratoga Rowing Association's Gil Dexter and Peter Lawry winning the next two, and the team selection.

"Leading up to trials, we knew that the Redwood double would be the main competition due to their second-place finish at Youth Nationals," Lawry said. "Gil and I joined up three weeks before trials and trained hard to beat them. In the first race we became more aware of their speed when they edged us out in the last one-hundred meters to take the win. Although we lost the first round, it gave us confidence to know that we had a good chance.

"In the second race, we pushed hard in the last half and won by under a second. The final race gave us a scare when Redwood led us by open water through the first thousand," he said. "By the last five-hundred, we had surged into a slight lead and continued to push for the finish. They sprinted hard, but we held on.

"Our hard work has paid off, and we are very excited to represent the US in Tokyo next month on the new Olympic course," he said. "Our training will continue as it has for the past three weeks as we gain experience and prepare for the exciting races that the future will hold."

Returning to the women's single will be Cambridge Boat Club's Emily Kallfelz, who won silver in the event at last year's U23 World Championships, and who had to beat her sister Eliza to win the slot at trials. 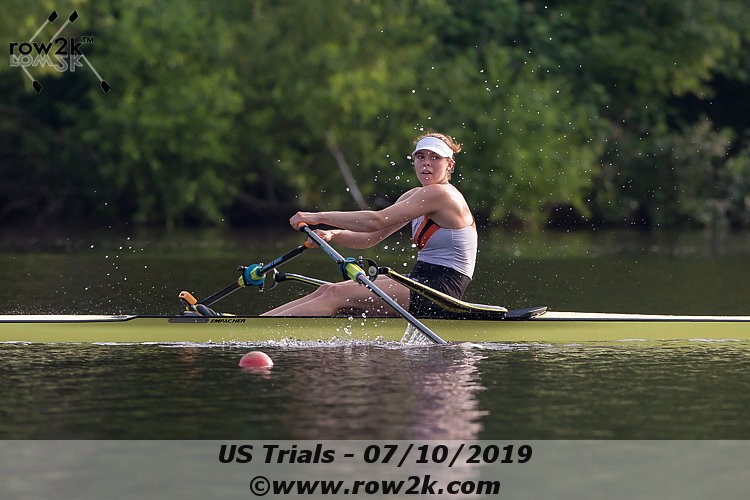 "Going into trials, I was looking to put down a solid, 2k piece under challenging circumstances - I took three days off to travel to a friend’s wedding," Kallfelz said. "So, I would say I hope to have a good bit more speed when it comes to show time, and I am excited heading into Worlds to see what I’ll be able to pull off.

"It was really fun racing with my sister - we haven’t trained and raced together in a while and it’s been a blast. She’s going to be very fast if she’s able to train half as much as she has had to work."

For Graves, racing in the quad will bring him full-circle to where he was in 2016, racing for a chance to qualify the men's quad for the US at the Final Olympic Qualification Regatta in a crew from Craftsbury Sculling Center that also included Davison. That boat did not quality and Graves and Davison came back in the double for the 2017 and 2018 World Championships.

"The original plan (for this year) was to continue on in the double with Ben, only to hear that he chose to go to sweep camp. After hearing that, I quickly changed my focus to the single and then fell short at trials.

"Combined with the disappointment of not rowing the double with Ben, the loss at singles trials really put me in a tough spot. I had put so much effort into the double and pursuing it as a long-term plan for Tokyo that it was hard for me to let go of it and move on," he said.

"I gave myself some time to be sad and upset, but then chose to go full speed ahead for the quad. Mike (Knippen) and Greg (Ansolabehere) finished first and second in the single at trials so it was enticing to try and make a quad work with them. We finished selecting the boat in early June and then went and tested our speed at WC2.

"Having fallen short of the Olympics in the quad by less than a second in 2016, there’s certainly a sense of unfinished business in the forefront of my mind, and while this wasn’t my initial plan this year, it seems fitting to be back with a chance to set things right this time around.

"I think the experience I bring to the boat manifests itself in a sense of urgency to leave no stone unturned, and search for inches per stroke wherever we can find them. You never know where you can find that 0.7 seconds that could make all the difference," said Graves.

Another athlete who had to reset her goals for the season was women's lightweight single sculler Emily Schmieg. Schmieg won a silver medal last summer in Plovdiv, Bulgaria in the lightweight women double with Mary Jones. 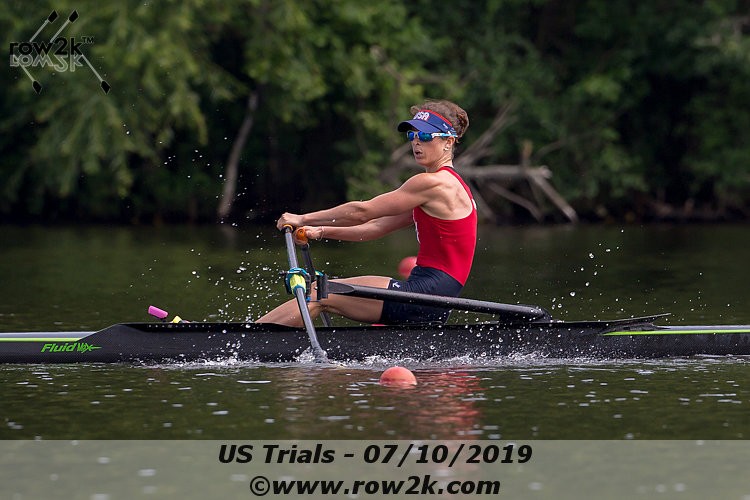 Jones and Schmieg did not win trials at the second US trials, and Schmieg re-set her goals for 2019 and went to trials in the lightweight single.

"It's certainly been a tumultuous year to say the least," Schmieg said. "You can make all the plans you want but life is under no obligation to follow them. Coming off (doubles) trials was challenging.

"After going through all the ups and downs I did the best thing I could think of, I went home to Potomac. With the support of Judith (Vogel), Matt (Madigan), my team and all of PBC, I was able to reset the clock a little bit and refocus my goals.

"Not making the 2019 World Championships team wasn't an option for me, and PBC supported me the whole way. I don't typically think of myself as a single sculler so I had to change my whole mentality over the last 6 weeks to accept the challenge that is racing this boat class," she said. "World Championships in the single is new to me but I look forward to embracing it and seeing what I can do in Linz." 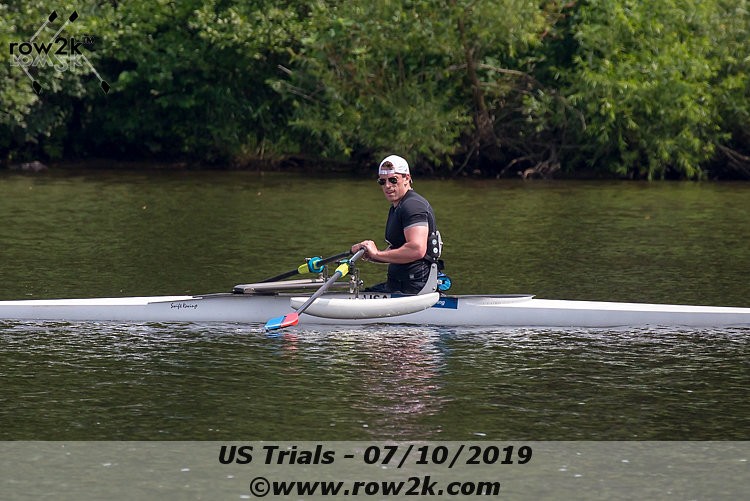 Of those crews, the most experienced of the winning athletes is Blake Haxton, who is coming back to the PR1 (arms and shoulders) single. Haxton, who raced to a fourth place finish at the 2016 Paralympics in Rio will be competing on his six US Para team. Haxton was unopposed at trials. He will race at the upcoming World Championships and attempt to qualify the PR1 men's single for the 2020 Paralympics.

"I had a pretty good piece, and I feel like I'm much more fit than last year," Haxton said. "Training has been going smoothly, and I'm excited to race again. It's fun having the added prospect of qualification and the Paralympic year coming up. It's hard to believe that we'll be back in Sarasota next spring for trials. How quick time goes."