The last time Jamie Koven was in Aiguebelette, he was rowing the single, and won the world championship in his first year in the boat, the first gold medal in the men's single since 1966. Koven returned to Aiguebelette this year to support the US team, and brought his whole family with him this time as well. The kids experienced Aiguebelette in their own way, wading and swimming in the water, cheering on the crews, and even ending up getting interviewed on the jumbotron, half in French and half in English.

It was also row2k's first year at Worlds, and we talked to Jamie about his memories from 1997, how the family visit has been, and what his kids know about his rowing career.

row2k: It has been eighteen years since you won the single here, but one thing that hasn't changed is that your hair was white then and now…

row2k: What's it like to be back here years after you won the single?

Koven: When I won here in '97 it was actually the third time I was here. My first time here was in 1990 for the Junior World Championship, so this is where I had my first world international race.

The second time was the training camp in '94. We spent several weeks here doing selection in fours for the eight, and that was the year we won the world championships in Indianapolis. But before Worlds we had the Goodwill Games in St. Petersburg, so we spent almost the whole summer in Europe before going back to the US.

Then the third time was here for the 1997 team, training for the world championships, and that was good. The US had a great regatta. We won the eight, the single, the lightweight single, the coxed pair and got a couple bronze medals in other events, so it was a great performance from the team.

So coming back here now, it's just an amazing place and it's awesome to look across from here and look at these cliffs and the flagpoles where the grandstands used to be. It definitely brings back memories. I wish I could still go that fast in the single; I think I have slowed down a little bit, so it's nice to see everybody racing. It was more fun to watch than to actually try to do it again. 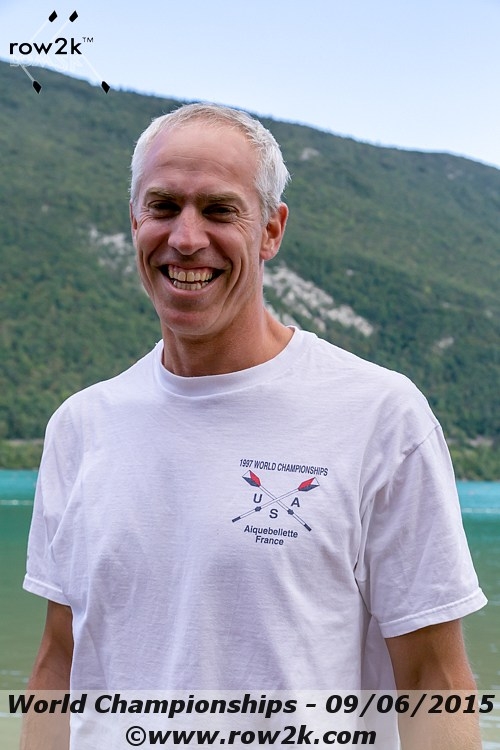 row2k: When I looked across the lake and saw the old finish line, which is very rustic-looking from here, I thought “I kind of like it like that,” like it's frozen in time.

Koven: I think the Worlds this year were pretty informal even on this side of the course, and over there it's even, as you say, it's even more rustic. It's a very natural environment, and it seems like it's more pure here than at some of the other venues. It's not a man-made course. Everything sort of blends in. They did a really good job with that. But the last time Worlds were here, they put the grandstand in the middle of the road, and people were not that concerned about rocks falling off the cliff and landing on the stands.

row2k: I was over there earlier in the week and climbed it, and there were rocks tumbling down all around and under me. That's a real risk.

Koven: You see the huge cages there to keep the rocks from falling, but it is a great place. Sophie [Koven's wife] and I were planning to come over here, and we told the kids we were going, and they absolutely insisted that they wanted to go as well. So they came over and they've loved it.

row2k: Do they understand how this fits into your rowing career?

Koven: The kids have a perspective on rowing even though I retired a long time ago, because I tried to come back to the team for the 2012 Olympics. They actually came to the races, they watched me training, they watched me put two years of effort into it, and so they were sort of living it. So for them it's not actually a completely distant memory. They were actually watching some of these races. They've watched the '97 race on YouTube like a million times.

row2k: Funny; the girls mentioned that when they were up on the screen today.

Koven: Yeah, exactly. I walk down some mornings, and Charlie's watching the Gran Supriz, Jamie Koven. They watch it all in French and they love it. So for them, they've seen this place on YouTube before and it's kind of fun for them.