The US LM4- finished the regatta with their best race, and a win in the B-Final

With Olympic qualification on the line, it turned out that the B finals had some of the most impassioned, unbridled racing of the day, if not the weekend. Truly without taking anything away from the races for medals, almost all of which were phenomenal, the B finals were raced with years-long Olympic dreams on the line, and it showed in the racing.

The United States qualified two boats for Rio through the B finals today, the women's double and the light men's four. 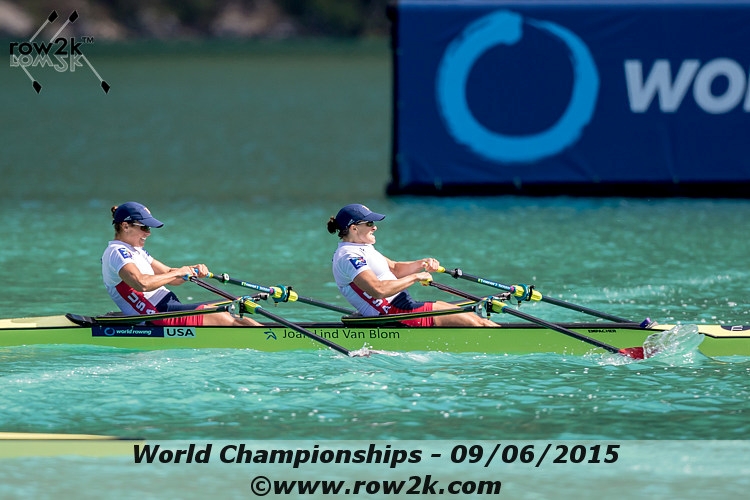 Women's Double
The women's double had a tough week of racing and training as the illness that rifled through a couple teams affected both members of the boat in the past few days, but was able to qualify the boat today in a B final that featured four boats within 1.2 seconds in places second to fifth.

"A tough and important one for any team coming into this regatta is qualification, so while it was very close, we can check that off the list," bow seat Meghan O'Leary said. "You look at all the doubles events, the class itself is the tightest event of all boat classes. We knew that coming in, and that it would be tight to get into the medals. We didn't think it would be this tight getting into qualification. In the B final, we saw that everyone showed up for this regatta."

The crew placed second in the second World Cup at Varese, but the past few weeks, and then the illness here at Worlds, found them a bit off their game, which is deadly in the doubles events.

"We had a really solid early summer," O'Leary continued. "To be candid we came back from Varese and had a tough eight weeks. It wasn't the eight weeks that we should have had and wanted to have coming into worlds, but we still thought we'd put ourselves in a decent enough place to do well. You can't show up at regatta like this and hope it all comes together. I think unfortunately we had a few things working against us. We pulled ourselves together for what we needed to do and that was qualification."

"Unfortunately it hit us really when it mattered on Friday morning. You can't come into an event like this, a race like this less than 100% and expect to be in a good place. We're pretty upset. We're not down. This event is really tough and I'm already looking forward to doing what we need to do next year. We've seen the competition, and we've beaten the competition, just not at the right time. We'll be back next year."

Light Men's Four
The US light men's four put together what many in their circle thought was their best row of the year, rowing extremely close to even splits to row from fourth position at 500 gone into the lead right around the 1000, where they stayed til the line to win the B final for a seventh place finish overall, successfully qualifying the boat for Rio.

"Since we've been here the number one goal was to qualify, so even though the first few races were a bit rocky and a little incoherent, it didn't really sidetrack us at all," bow seat Anthony Fahden said. "We all had the same goal in mind. It was also our first regatta as a boat; we haven't raced before so we kind of knew there could be some kinks to work out. We're happy that at the last race we were able to end on a positive note. " Nonetheless, the crew wasn't thinking about qualification as they prepared for and raced the B final today.

"We were just thinking about the task at hand, really technical rowing stuff, not really a bigger picture. That's not really going to help you win. When you're going down the course there's no time for big picture stuff. It's just match the guy in front, lever together, and go."

I asked if now was the time to start looking ahead to Rio.

"No, it's time to take a week off and not think about rowing!" he said with a laugh. "I think everybody is just looking forward to letting loose a little bit, a little mental time off." 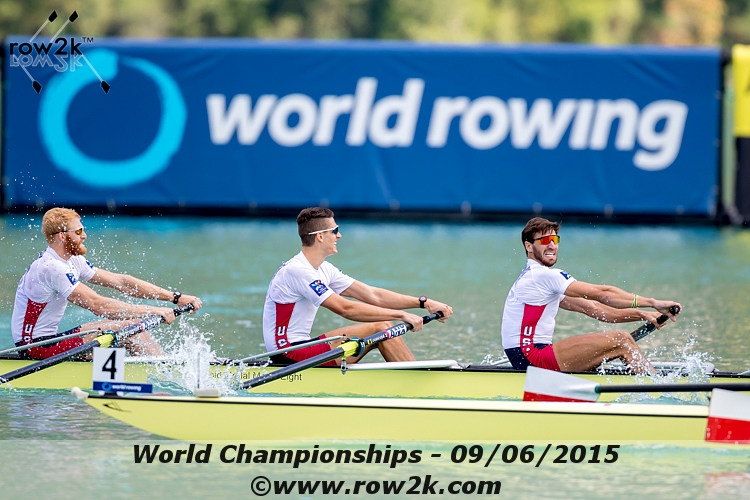 Men's Eight
The US men's eight won their B final rowing away after trailing Poland for most of the race, also with an even-split-ish performance in which they ended up posting the fastest split time in each of the last three 500 meter segments. The crew went 5:27, which for the conditions was decent speed.

"The guys did a great job today, and we do feel like it is a bit of a missed opportunity," coach Luke McGee said. "We felt like we were on track, but maybe we need a little more experience to be able to come here and put in our best performance when it counts. There is some redemption for the guys to go out with a good race where they could show what they can do, so I'm really happy for them."